Suicides in the military 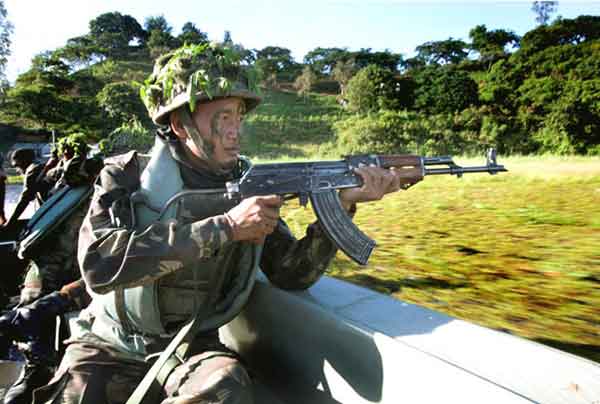 Of late, incidence of suicide in the military, have been highlighted by the national press and the issue also came up for discussion in the Parliament. The yearly average of suicides in the Indian army is around 100. Some may argue that in an army of 1.2 million that figure is not alarming. For the military life of every soldier is valuable and needs to be protected. There are some very complex reasons for these suicides and it is not possible to compartmentalize these into any set pattern or causes.

The officer, whom I relieved on the divisional staff, had a bright career and had been cleared for promotion to the rank of a brigadier. A day after handing over charge to me, he shot himself. He had realized that the medical board would block his promotion. Deputy Commander of a brigade shot himself because some female had intruded into his married life. A soldier’s wife in my unit, for no apparent reason, suffered from fits of depression and the psychologist could not help her. She took her own life. A soldier with serious problems at home shot himself while on guard duty. In each of these cases their depression had taken them to a point of no return and cause in each case was vastly different.

For the military life of every soldier is valuable and needs to be protected. There are some very complex reasons for these suicides and it is not possible to compartmentalize these into any set pattern or causes.

Indian soldier’s woes have been many fold. A number of wars and low intensity operations in Sri-Lanka and Kargil, and combating unending insurgencies has been his bane.  One who may have suffered traumatic brain injury during engagement with the enemy or insurgents could end up with posttraumatic stressed disorder (PTSD)  and has all the possibilities of going into severe depression. Death of a close friend in these operations, have led to depression in some cases. Added to these are the repeated postings to high attitude and uncongenial areas, where one experiences persistent feeling of isolation, loneliness and is haunted by possible sickness and impossibility of air evacuation due to persistent bad weather in such areas. Spell in peace stations are burdened with over work and little rest.

Long term effect of tenures in high altitude ( above say 18000 feet ) has not been fully determined and assessed. Low levels of intake of oxygen, for long periods  does impair the mind and there is an impression amongst the troops that such long exposures affect potency of a person.

A soldier throughout his service, at best, gets no more than two years to live with his family. Break-up of joint family system have left separated families to fend for themselves.  Problems of living alone, raising children, their education and all the connected problems which get transmitted to the husband via the currently available communication systems, on almost daily basis, adds to the soldier’s anxieties and stresses. Indian army soldier is haunted by the prospects of retirement at an early age of 35/37 years, increasing family commitments and the consequent financial problems thereafter.  So by and large a soldier’s life in the Indian army is  full of anxieties, stressful and often depressing.

Suicide prevention programes in the U.S army do not appear to make much headway. In the American army there are cases of officers including some doctors, ending their life, who never served in Iraq and Afghanistan, had bright careers, happy married life with bright children and no visible scars.

Units with high standards of discipline, good morale and esprit-de-corps, with good and caring officers are less likely to face suicide cases.  Good leadership coupled with feelings by each soldier that he forms a useful member of the unit and his efforts are recognized and appreciated reduces the chances of depression amongst soldiers who could otherwise be more susceptible to this malady. Efficient administration in the unit, such as timely grant of leave, ensuring that soldiers get their rightful emoluments, their professional skills are periodically enhanced adds to their well being and contentment and all this reduces stress and anxiety which could be precursors to depression. Some units adopt a system of early detection of cases of stress and anxiety through the ‘buddy system’ and arrange counseling. As an immediate help at unit level, certain number of Junior Commissioned Officers ( JCOs ) are given basic training in counseling.

In some cases property disputes, encroachment of land and the attendant unending legal hassles, an uncaring and corrupt administration has a demoralizing effect on a soldier.  Faced with such problems a soldier, far away from home and in state of helplessness can slip into depression and if left unattended could, in a fit of depression, could attempt to end his life.

The incidence of suicides in the American army is, one a day and the percentage of officers in these cases have been higher than in India, essentially because it has been involved in fighting wars for over 12 long years. Pentagon sets aside $2 billion for mental health of troops and authorities have been trying hard to combat the problem of suicides. General Peter Chiarelli, recently retired deputy chief of American army, feels that these funds are inadequate.

Suicide prevention programes in the U.S army do not appear to make much headway. In the American army there are cases of officers including some doctors, ending their life, who never served in Iraq and Afghanistan, had bright careers, happy married life with bright children and no visible scars.  Such is the complexity and perhaps paradox of the working of human mind and its susceptibility to depression and consequent suicides. The state of helplessness in combating this problem is best expressed by Leon Panetta, United States, Secretary of Defence when voiced his concern in these words. “This issue of suicides is perhaps the most frustrating challenge that I have come across.”

Military service is not just another avenue for unemployed. It may be valuable to determine if this recruitment pattern had added to the suicide cases.

On the other hand, India’s Raksha Mantri seems to have found a simplistic remedy in liberal leave and good living conditions,  etc for the soldiers. He asked the defence secretary and the three vice chief of the services to go into this issue of suicides. Predictably this could be followed by constituting a “Group of Secretaries,’ ( government’s  ultimate solution  for any complicated issue ) to go into the problem and put up recommendations.  The final solution could possibly point to creating a, ‘Department of Prevention of Suicides in the Military,’ with an IAS officer as its full time secretary!  But these are perfunctory steps, which have become a norm with the government and there is unwillingness to look serious problems in the eye.

In the absence of adequate data on the subject, taking into consideration all cases,  background of these soldiers, their known problems, age group, marital status, financial state, details of their past ten years tenures, detection of signs of depressions and methods employed for the purpose and  once signs of depression are observed, steps taken to seek expert help etc, no worthwhile examination of the problem is feasible.

Indian army has an enviable record spread over two centuries. Troops have been through some very hard and prolonged fighting in the two World Wars and innumerable other campaigns with long separation from families. Data pertaining to suicides during such periods could be of much relevance and value.

Years ago recruitment pattern was changed, in that vacancies from traditional classes who had been providing manpower for the army, were shifted to overall population spread  in the country and recruitment came to be based on Recruitable Male Population ( MRP ) of a province.  Military service is not just another avenue for unemployed. It may be valuable to determine if this recruitment pattern had added to the suicide cases. It is only a detailed analysis of all relevant data and more that a workable solution to this serious problem can be evolved. It is a problem that army cannot just shoot it down or run a tank over it!

It would be pertinent to look into the enrolment standards. Military service has been rendered so unattractive that for the present, it is the last choice for those who seek government employment. Military service is not just another avenue for employment for the unemployed or the unemployable. It is a well acknowledged fact that soldiering is not every ones cup of tea. It may be worth the while to introduce some elementary psychological tests for those seeking to join the military service as soldiers. Comprehensive tests on these lines are already conducted by the Services Selection Boards for those seeking entry into the officer cadre.

7 thoughts on “Suicides in the military”