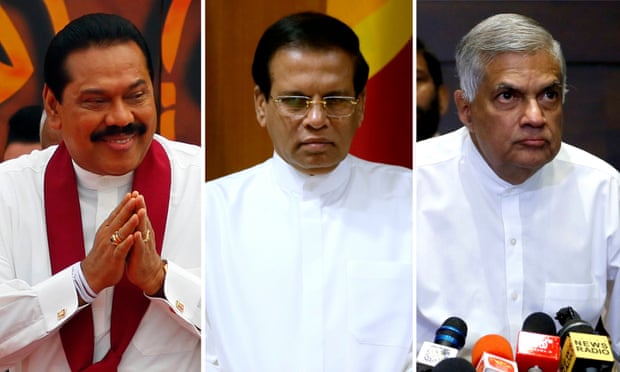 On 26th October, President Sirisena summarily dismissed Prime Minister Ranil Wickremesinghe and appointed former President Mahinda Rajapaksa in his place.  In order to gain time to have a majority and approval of the appointment, Sirisena prorogued the Parliament till 16th of November and may continue to keep the Parliament closed for the next two months with more proclamations!  Thus, a constitutional crisis has been created.

The ousted Prime Minister Wickremesinghe refused to accept the order and said that his sacking was illegal, unconstitutional and anti- democratic.  He claimed that he was constitutionally appointed under Article 42(4) of the Constitution.

Under the 19th amendment of the Constitution made in 2015, the Presidential power to dismiss the PM was removed and instead, it made the PM responsible to the Parliament.  It is claimed that the PM was not given any formal notice before being sacked.

Thus the legal position is fairly in favour of Wickremesinghe though in the interim period there could be horse trading and shifting of loyalties to ensure that Rajapaksa gets the required majority in the Parliament. There was a rumour that the Speaker Karu Jayasurya had a hand in Wickremesinghe’s ouster, but this does not appear to be correct.

Unfortunately, in an environment where ‘fake narratives’ is the rule of the day, an Indian angle was brought into this episode. A week before the sacking, it is said that in an important cabinet meeting, Sirisena had openly burst out over an alleged assassination plot engineered   by the Indian Intelligence Service R&AW.  The Sri Lankan media also mentioned about open differences between the President and the Prime Minister over the construction of a terminal in Colombo Harbour to be done by India and supported by PM and that it was ruled out by the President who wanted to have it done with local funds and Sri Lankan expertise.

Ousted PM Ranil had visited India just a few days before his sacking.  It was made out in the Sri Lankan Press that the Indian PM Modi in his personal meeting with Ranil had expressed his displeasure over the slow progress being made in the implementation of Indian projects due to official hurdles being placed.

It should be mentioned here that the discord between President Sirisena and Prime Minister was not something that happened in the last two weeks nor was it due to differences on relations with India. It was brewing for the last six months and the sacking was a well-thought out move by Sirisena.  Was the sacking triggered by the visit of Wickremesinghe to India just a few days earlier?  One cannot say as the current PM Rajapaksa had a very successful visit in September this year also.  Should this not have been anticipated by India? Again I have no answer.

In the Sri Lankan Parliament, the critical number is 113 seats to have a majority.  Ranil has 106 seats and Rajapaksa has 99.  The TNA has 16 and the JVP has 6.  The two latter groups have so far remained neutral, but two Tamil MPS have shown support to Rajapaksa.

Sampanthan, the leader of the TNA has linked his support to the National question relating to Tamils.  To me, even if Rajapaksa agrees to everything demanded by the TNA now to gain power, knowing Rajapaksa’s past, nothing can be expected from either group so far as the Tamil Question is considered.  At this old ripe age, I hope Sampanthan does not make the mistake of supporting  of one against another in the hope of solving the Tamil question.  The Tamil question or rather the ethnic question can be solved only when both the major Sinhala groups realise the need for it and also accept the fact that they are also Sri Lankans! This cannot be wished away and cannot be solved either  in the near term.

India did the right thing in taking its time to respond to the events in Sri Lanka which in a sense is an internal problem.  There was no need to rush in, even if it is perceived that with the entry of Rajapaksa the Chinese would step in- in a big way.  By now people are aware of the predatory nature of the Chinese aid and the way Sri Lanka has been robbed of its sovereignty over the Hambantota Harbour.  Other countries in the region had seen “debt traps” and have been bold enough to ask the Chinese to reduce their investments.  Even Myanmar which is totally dependent on China on every issue, has been cautious in the Belt Road Initiative.  The Public in Sri Lanka will not allow it after the lessons learned.

When the crisis began in Sri Lanka, I recalled the events in Maldives and the response of the Indian establishment.  Before the full details could be ascertained, when the Maldives President Md. Nasheed was forced to resign, the Indian embassy in Male unceremoniously removed all the portraits of Nasheed in the embassy and Delhi was too quick to congratulate the new President Waheed!  Poor Nasheed, a real friend of India and a true democrat could not even meet the top Indian leaders when he visited to Delhi to explain his position.

Nearer home, when there were strong differences between Oli and Dahal, the latter was invited for an official visit.  Dahal’s first call as reported in the Nepalese press was on the NSA before meeting the Foreign Minister and the Prime Minister.  Dahal gave an interview to the Indian Press and freely discussed the internal politics of his newly formed National Communist Party.  The impression in Kathmandu as seen from the press was that Dahal wanted to use the Indian connection to become the Prime Minister again and India wanted  to use him to reduce the Chinese influence! This atleast  appeared to be perception in Nepal. At any rate Oli is in a very strong position as of now.

This time, India responded correctly in a measured manner.  There is enough time to wait.  Both Sirisena and Rajapaksa are strong characters and knowing the circumstance under which Sirisena resigned from the cabinet in 2014, it remains to be seen how the two can work together for long.

The main casualty however has been the promise made to the electorate by Sirisena in 2015 of Governance and Constitutional Reforms!