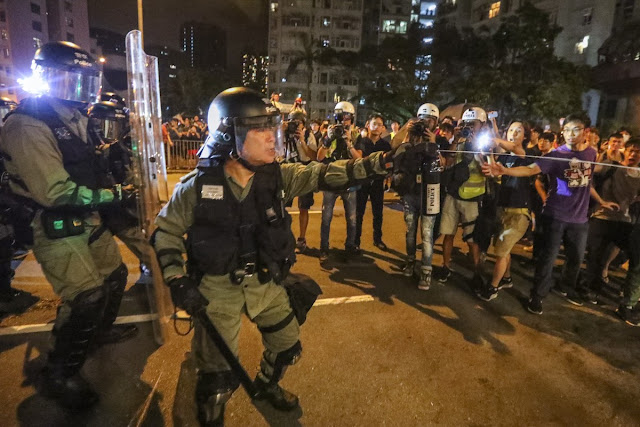 Since his visit to Mamallapuram, Chinese President Xi Jinping has been facing a rough sea at home. The 4th plenary session of the 19th Chinese Communist Party’s Central Committee was held in Beijing from October 28 to 31. The members discussed the work report presented by Xi and adopted it “to uphold and improve the system of socialism with Chinese characteristics”.

The complicated situation of increasing risk challenges at home and abroad,” was mentioned in the communiqué. The gathering “upheld the principle of ‘one country, two systems’, maintaining lasting prosperity and stability in Hong Kong and Macao, and promoting the peaceful reunification of China.” Today, it looks like a distant dream.

Beijing did not expect a ‘tsunami’ in favour of the pro-democracy movement which won 392 out of 452 seats in the Hong Kong local elections. Anti-Beijing candidates took control of 17 out of 18 district councils. “Xinhua waited until Monday afternoon to release a two-paragraph news report on the polls, stating only that the elections took place and 18 districts produced results,” The South China Morning Post (SCMP) reported.

Meanwhile, the People’s Daily just spoke of the history of US intervention in foreign elections.

In the weeks preceding the elections, the Global Times repeatedly claimed that a ‘silent majority’ in Hong Kong was condemning the protests. What complicates Xi’s life further is that their victory could give pro-democracy candidates a larger say in the selection process for the next chief executive as they control of 117 seats on the 1,200-member selection committee. “This shift in the balance of power will mean that Beijing will be more reliant on the major property developers and their business associates — at a time when Beijing has been trying to wean itself away from [them],” SCMP said. So, the ‘tycoons’ may decide who will be the Communist leader of the semi-autonomous region. That is not the only problem of Mr Xi.

Wang Liqiang, who spied for China for many years, recently defected to Australia. He wrote a 12-page Chinese-language confession on some disturbing aspects of Beijing’s political interference. The Age in Australia cited a few: “efforts to manipulate Taiwan’s elections, infiltration of student organisations in Hong Kong, and even the kidnapping of political dissidents. [Wang gave] names of organisations and key figures in Chinese military intelligence.” Wang, probably one of the first operatives from China to blow his cover, is now seeking protection in Australia.

To make things worse, on November 16, The New York Times published excerpts of 403 pages of internal classified documents on China’s crackdown on Xinjiang. It is an unprecedented insider’s view on the clampdown and, particularly, the internment camps, where more than one million Muslims are kept.

“As the government presented its efforts in Xinjiang to the public as benevolent and unexceptional, [Beijing] discussed and organised a ruthless and extraordinary campaign in these internal communications. Senior party leaders are recorded ordering drastic and urgent action against extremist violence, including the mass detentions, and discussing the consequences with cool detachment,” the NYT reported.

“The documents show China’s plans for sweeping extrajudicial detentions and internment camps in Xinjiang are all signed by one man: Zhu Hailun,” the International Consortium of Investigative Journalists noted. Zhu came to Xinjiang in 1975 as part of a party initiative to send educated urban youth to live in the countryside to further China’s Maoist revolution. But they should not forget Chen Quanguo, the party boss in Xinjiang. At the end of August 2016, Chen was sent from his post in Tibet to ‘pacify’ the Xinjiang Uyghur Autonomous Region (XUAR). The party believed that Zhang Chunxian, Chen’s predecessor in Xinjiang, could not deliver the goods. For Chen, it was a reward for his ‘Tibet recipe’ as he was soon promoted to the all-powerful politburo. In five years, he managed to ‘stabilise’ Tibet. What was the recipe? First, utter ruthlessness. Second, Chen transformed the plateau into a vast Disneyland: Chinese tourists descended on Tibet in waves to experience the ‘Paradise on Earth’ with its blue sky, pristine lakes and rivers, luxuriant forests and deep canyons.

In Xinjiang, Chen added the infamous internment camps. I almost forgot to mention one more headache of Xi’s: US President Donald J. Trump, who is threatening him with a trade war. Also, as I concluded this article, the news came that Yonten, a 24 year-old Tibetan man from Ngawa in Eastern Tibet, immolated himself protesting the Chinese rule in Tibet. He is the 156th to do so.

India is indeed a ‘cool’ country in comparison.