Xi in India: a thorny route at home? 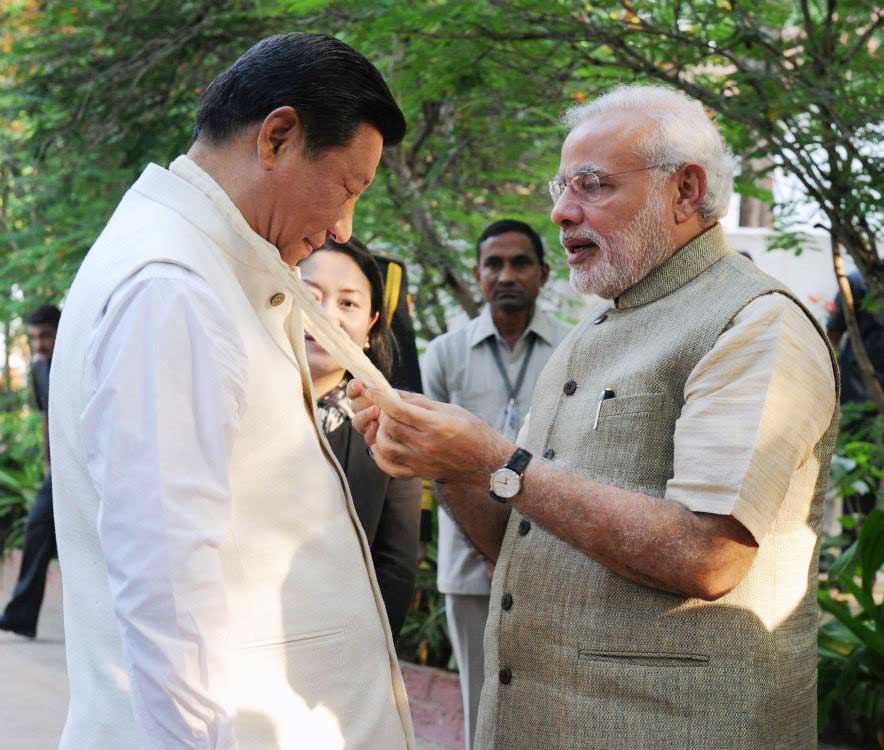 There are two ways to look at an event, especially a State visit by a foreign dignitary: it can be described as a resounding success, a game-changer, or it can be seen as a missed opportunity, a failure.

President Xi Jinping’s visit to India was a bit of both.

The second issue which did not go according to the planned program is the worsening of the situation in Southern Ladakh.

Before his arrival at Ahmedabad, the Chinese president Xi wrote an op-ed in The Hindu: “As the two engines of the Asian economy, we need to become cooperation partners spearheading growth. I believe that the combination of China’s energy plus India’s wisdom will release massive potential.”

Unfortunately, things did not go as scripted.

First an extraordinary event, (a real scoop not noticed by the India media) occurred a day before the President’s arrival: Wei Wei, the Chinese Ambassador to India was suddenly transferred. He was replaced by Le Yucheng, earlier posted in the Ministry of Foreign Affairs in Beijing.

To change the ambassador a few days before his Head of State arrives in the country must be a first in diplomatic annals.

What was behind this abrupt move? We may never know, though it happened at a time when speculations are rife about the fate of the Chinese Ambassador to Iceland, who apparently was too close to the Japanese; he has ‘disappeared’ somewhere in China.

There is probably no link between the 2 issues, but Wei Wei’s sudden ‘departure’ is rather strange.

The second issue which did not go according to the planned program is the worsening of the situation in Southern Ladakh.

Everyone knows that there are different ‘perceptions’ about where the Line of Actual Control (LAC) lies, particularly in this area; but as Xi arrived in Ahmedabad, hundreds of Chinese troops from the People’s Liberation Army (PLA) and the People’s Armed Police Force crossed the LAC and stood a few meters away from the Indian jawans.

It is a totally new claim with no serious basis. The intrusions in Chumur are pure land-grabbing by China; you can call it, ‘expansionism’.

Why this show of force when Xi Jinping, who is also Chairman of the Central Military Commission was trying to do business in India? Was there a better way to sabotage the presidential visit?

Last year, at the time of the Depsang incident, I wrote that Chinese intrusions were probably due to the unfortunate initiatives of some local PLA commanders; I was then told: “It can’t be. The PLA’s generals are a disciplined lot and Chairman Xi is fully in command.”

This came back to my mind when I read in The Business Standard, Shrikant Kondapalli, the JNU professor and expert on China affairs asserting: “this could be a message given by the Chinese troops to its President, Xi Jinping, that no fruitful discussion on the boundary issue be held with the Indian leadership during his official trip.”

Were some very senior PLA generals unhappy about the thaw between India and China? Or perhaps disturbed about Xi’s fight against corruption?

What is strange is that Chumur, located north of Himachal Pradesh, has historically never been claimed by Tibet (and consequently, by China). It is a totally new claim with no serious basis. The intrusions in Chumur are pure land-grabbing by China; you can call it, ‘expansionism’.

Does it mean that Xi Jinping, the Chairman of the Central Military Commission (CMC) does not have full control over his generals?

An indication that everything may not be rosy for Xi is the recent visit of General Fan Changlong, the CMC’s Senior Vice Chairman to Tibet.

Does it mean that Xi Jinping, the Chairman of the Central Military Commission (CMC) does not have full control over his generals?

On August 17, Xinhua reported that General Fan, who had come “to inspect the forces stationed on the snow-covered plateau, the loyal soldiers defending the frontiers,” asked the troops “to thoroughly study and implement President Xi’s series of important speeches about the situation in the Party” (read the corruption cases against former security tsar Zhou Yongkang and others ‘tigers’).

The South China Morning Post later reported that: “proceedings [against Zhou] could start as early as next month. …These will pave the way for a possible public hearing for Zhou, who could become the highest-ranking party official to face trial.”

While in Lhasa, General Fang pointed out that combat training is an important task for the preparation for military struggle; it is the basic starting point. Interestingly, Chinese media reports did not mention which units he visited, how long he stayed in Tibet, where he went.

What was the Commander of Jinan MR doing around is not clear, though having been earlier posted in Tibetan Military District, Zhao certainly understands the ground reality.

Xinhua reported that General Fan told the army to firmly obey the command of President Xi Jinping and the Communist Party of China (CPC) Central Committee.

Are they not always obeying Chairman Xi? This could be an indication that something is rotten in the Middle Kingdom.

In military jargon: ‘let us exchange the bloody LAC maps’.  When he answered, Xi spoke of border agreement only, not about the LAC. It is telling. ‘Exchange of maps’ was not mentioned in the Joint Statement too.

A month earlier, China Military Online had reported that Xu Qiliang, the second CMC’s vice chairman had inspected some garrisons in Xinjiang and Tibet: ” General Xu Qiliang visited the officers and men in frontier areas, and held talks with the leaders of the units garrisoning in Hotan [near the Aksai Chin],Ngari [near Demchok] and Lhasa areas.”

Xu Qiliang also paid a visit to Shenxianwan (north of the Karakoram Pass and the Depsang Plains) at the altitude of 5,380 meters and the Khurnak Fort (opposite the Indian troops posted on the Panggong tso) where he inspected a speed-boats squadron and inquired “about the soldiers’ work, study and life.”

What is the signification of these visits? It is difficult to give a definitive answer, except that the senior-most generals are aware of the situation on the Indian front.

But regarding the recurring intrusions, Narendra Modi has enunciated the response: “I also suggested that clarification of Line of Actual Control would greatly contribute to our efforts to maintain peace and tranquility and requested President Xi to resume the stalled process of clarifying the LAC. We should also seek an early settlement of the boundary question.”

In military jargon: ‘let us exchange the bloody LAC maps’.

When he answered, Xi spoke of border agreement only, not about the LAC. It is telling.

‘Exchange of maps’ was not mentioned in the Joint Statement too.

As mentioned in a previous column, the choice of Nathu-la, located far from the Kailash-Mansarovar area, in place of Demchok in Ladakh, which is the natural port of entry for the pilgrimage, also demonstrates that the PLA/PAP are not keen to normalize the situation on the Ladakh border.

Apart from that, everything went smoothly and hopefully we shall soon travel at high speed in Chinese bullet trains (though I still think the French TGVs are safer and more comfortable).

Back in China, Xi might have some homework to do.

One thought on “Xi in India: a thorny route at home?”