Home  >  Spotlights  > Geopolitics  >  Will Xi Junior have courage for return of Dalai Lama?

Will Xi Junior have courage for return of Dalai Lama? 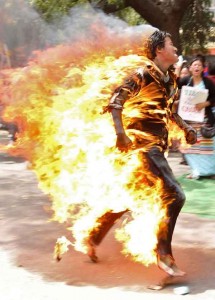 This is the stanza of a poem written by a 17-year-old Tibetan nun, Sangay Dolma before she took the fatal decision: Dolma set herself on fire in front of a Chinese government office at Tsekhog, near Rebkong in the formerly Amdo province of Tibet (now Qinghai). Dolma passed away soon after. On a photograph of herself, she had written, “Tibet Independent Nation”.

The young nun, like millions of Tibetans, dream of a future return of their leader, the Dalai Lama (‘My Lama has returned’). She saw her native land free: Look up, Tibetans, Look at the Snow Mountains. The Land of Snows’ era has begun. And Tibet is free and independent. So far, 95 Tibetans have made the supreme sacrifice by immolating themselves with this prayer on their lips.

Looking at the widespread resentment against the present Beijing regime, one could ask: where is China heading?

That is not all, on November 26, Voice of America (VOA) reported: “Over a thousand students in Chabcha County [in Hainan Tibetan ‘Autonomous’ Prefecture] took to the streets to call for equality of nationalities, freedom of language, investigation of present situations and respect for truth. The protest by Chabcha Tibetan Medical School students lasted for about two hours before Chinese personnel used severe force to break the peaceful demonstration, injuring many students.”

The Tibetan Centre for Human Rights and Democracy in Dharamsala said that the students demonstrated against a ten-point political questionnaire on self-immolations and the conducting of ‘patriotic education’ sessions during which they had to make disparaging remarks against the Dalai Lama.

Looking at the widespread resentment against the present Beijing regime, one could ask: where is China heading? There is a corollary question: Can repression, always more repression, solve the problem? This reminds me the Chinese reaction to the uprising of the Tibetan people in March 1959. The entire population of Lhasa (is it not what the Party calls the ‘masses’?) surrounded the Norbulinka Place to protect the Dalai Lama who had been invited to attend a cultural performance in the PLA’s cantonment and this, without being accompanied by his usual regiment of bodyguards. 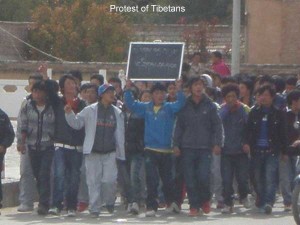 As the Lhaseans protested, Beijing reacted with great brutality. Xinhua published a communique stating: “Violating the will of the Tibetan people and betraying the motherland, the Tibetan Local Government [the Dalai Lama Administration] and the upper-strata reactionary clique colluded with imperialism assembled rebellious bandits and launched armed attacks against the PLA Garrison in Lhasa during the night of March 19. …The valiant units of the PLA stationed in Tibet completely smashed the rebellious bandits in the city of Lhasa on the 22nd. Now the units of the PLA, assisted by patriotic people of all sections, both religions and secular, are mopping up the rebellious bandits in other places in Tibet.”

Sixty-three years later, the resentment in Tibet remains unchanged. Is the Chinese reaction different? How long can Beijing continue ‘mopping’ up? Already on November 9, some 5000 Tibetan schoolchildren had a peaceful protest march near Rongwo Monastery, in Malho (Rebkong) Prefecture. On November 14, an official five-point notification was issued by the Malho People’s Government warning self-immolators and their families as well as those offering condolences and prayers for the deceased. The first point states that government aid will be cut off for three years to the family members of a person who had self-immolated.

Next it calls for ‘thorough investigation’ to determine whether any government officials and staff had visited the homes of self-immolators to offer condolences. The Public Security Bureau officers would ‘strike hard’ on those who do not listen to such guidance. The third point asks the Party officials to provide “advice and guidance to monks and lay Tibetans on the consequences of visiting homes of self-immolators to offer condolences and contributions for prayer rituals”.

…personally meet the Tibetan leader in a Chinese (or Indian) embassy abroad and have a preliminary discussion with him to prepare a road map to stop the immolations and bring about a genuine reconciliation between Tibet and China.

Then, the notification warns that investigation will be conducted “to see whether any person, both monks and lay, had arranged and forced some officials to visit the prayer ceremonies for self-immolators”. These warning are obvious proofs that ‘local’ Tibetan officials often sympathize with the self-immolators? The fifth and final point threatens those who would participate in prayer rituals; they would immediately be fired and punished. Ultimately, as always, the blame is put on the Dalai clique “wearing religious robes, use self-immolations to create instability.”

Can the situation improve after the Xi Jinping’s new regime is in place in March? It is a billion-dollar question.

Let us have a look at the ‘political’ equation in Beijing. A few days before the beginning of the CCP’s 18th Congress, Xinhua reported that Jia Qinglin, the then No 4 in the Standing Committee of the Politburo and Chairman of the National Committee of the Chinese People’s Political Consultative Conference called “for greater development in China’s ethnic Tibetan regions, as well as more efforts to fight the Dalai Lama clique, in order to ensure the regions’ lasting stability.”

Jia then told a press conference that “Tibet-related issues are of paramount importance for the Communist Party of China and the country”. He added: “stability and development should be stressed in Tibetan regions.” Xinhua explained that “China’s Tibetan regions include the Tibet autonomous region and parts of the Qinghai, Gansu, Sichuan and Yunnan provinces.” In another words, Beijing speaks of ‘Historical Tibet’, as defined by the Dalai Lama. 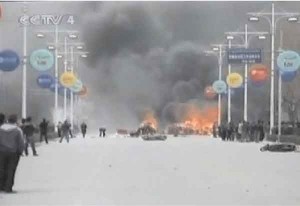 The outgoing member of the Standing Committee of the Politburo further said: “Tibetans’ livelihoods should be improved and the regions’ ecological protection should be emphasized.” He did not mention that the Central Working Coordination Small Group on Tibet (or Leading Small Group) had a meeting just before the Congress. What is a ‘leading small group’ or LSG?

According to Wikipedia it is “an ad hoc supra-ministerial coordinating and consulting body formed to build consensus on issues that cut across the government, party, and military systems when the existing bureaucratic structure is unable to do so. The authorization for the formation of leading groups comes from Chapter IX of the Constitution of the Communist Party of China.”

The online encyclopedia adds: “These groups provide a mechanism for top decision-makers to exchange views–both formally and informally–and to develop recommendations for the Politburo and the State Council. LSGs do not formulate concrete policies, but rather issue guiding principles about the general direction in which bureaucratic activity should move.”

The job of the Small Group on Tibet is to implement the policies of the 5th Tibet Work Forum held in January 2010.

The Group had a meeting on October 18, under the Chairmanship of Jia Qinglin. It was attended amongst others by senior officials such as Ma Kai, Meng Jianzhu, Ling Jihua, and Du Qinglin as well as ‘local’ cadres posted in Tibet.

At that time, Ma, Meng and Du were the Vice Chairmen of the Small Group. After the 18th Party Congress’ leadership change, all these leaders have secured good jobs for themselves. Ma Kai and Meng Jianzhu are members of the reconstituted Politburo, (Meng will take the crucial mantle of Zhang Yongkang as the boss of the Security apparatus).

Du Qinglin was shifted from the United Front Work Department (responsible for Tibet affairs) to the Party Central Secretariat while Ling Jihua will take Du’s seat in the United Front. Though a new Small Group on Tibet needs to be officially reconstituted, these officials will probably continue to influence China’s Tibet policy. Can any improvement be expected in Tibet with the same old faces? Probably not!

Who will replace Jia as the leader in the Politburo’s Standing Committee, responsible for the ‘minorities’ affairs’? It is rumoured that Yu Zhengsheng, former Party Chief in Shanghai may step in Jia’s shoes. The only thing one can say is that he has no earlier experience with ‘minorities’.

But the foremost question is: can President Xi Jinping give a fresh impetus to the Party and reverse its Tibet Policy? In my opinion, the only solution would be that Xi Jinping, whose father Xi Zhongxun knew the Dalai Lama well in the 1950’s and early 1960’s, agrees to personally meet the Tibetan leader in a Chinese (or Indian) embassy abroad and have a preliminary discussion with him to prepare a road map to stop the immolations and bring about a genuine reconciliation between Tibet and China.

Will Xi Junior have the courage to take this step? Will he be allowed by his new Politburo? Does China have any alternative? So many questions without any immediate answer.