Home  >  Spotlights  > Geopolitics  >  Will ISIS get a foot-hold in India?

Will ISIS get a foot-hold in India? 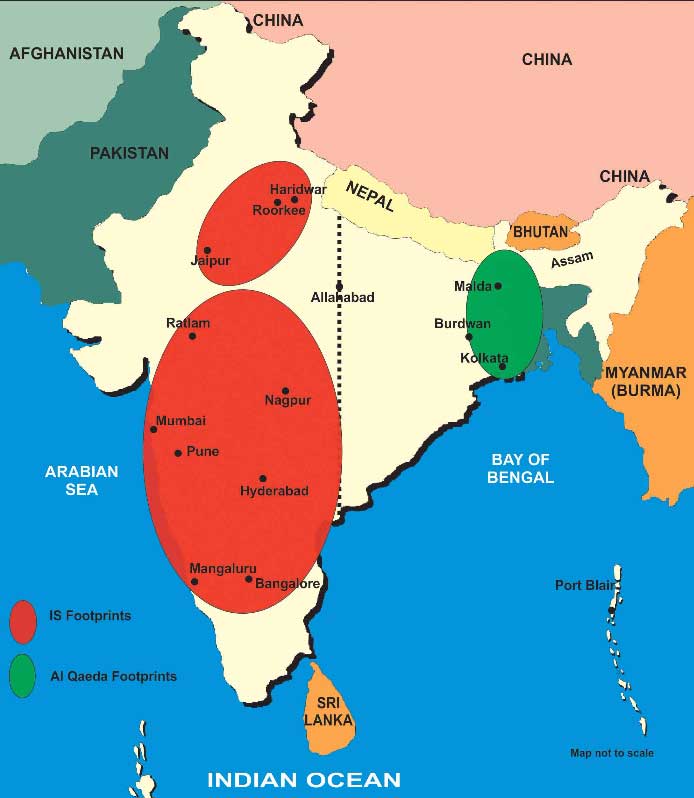 With the world’s second largest Muslim population and flourishing fundamentalist Islamic schools like Deobandis, surprisingly, India has not sent more than 25 fighters to ISIS, so far. In my Huffington Post article titled “Why ISIS can’t have much headway with India Muslims?”,

If ISIS ever gets any following in India then it will be due to its clear, immediate, strong, and focused religious appeal.

I argued that ISIS will not gain ground in India for a plethora of reasons like India’s liberal Sufi Islam, inherently diverse and  tolerant nature of state and society facilitating stronger integration of Muslims in the mainstream society and the presence of strong right wing.

I still, more or less hold to that way. However, after Brussels attack, symbolic of the fast-spreading global reach of ISIS and its ideology, I feel that once again we need to address the alarming question, “Will ISIS get a foot-hold in India?”

If ISIS ever gets any following in India then it will be due to its clear, immediate, strong, and focused religious appeal. Graeme Wood in his essay, “What ISIS Really Wants?”, writes that ISIS follows a distinctive variety of Islam whose beliefs about the path to the Day of Judgment matter to its strategy, and can help the West know its enemy and predict its behavior.

He further informs, “In conversation, they insist that they will not–cannot–waver from governing precepts that were embedded in Islam by the Prophet Muhammad and his earliest followers.

The directness, clarity and the force of its religious appeal invoking all Muslims to be the part of the project that brings back caliphate has always been missing in outfits like Al Qaida, Taliban, Lashkar-e-Toiba whose objectives are a vague concoction of nationalist, religious and sectarian agenda and they are seen as regional groups working as proxies for intelligence agencies.

…the influence of Deobandi School is spreading fast across the country which could be found in the increasing number of Muslim women taking to Burqas, rejection of Sufi practices and the fast-spreading network of Deobandi mosques.

Interestingly, Mahatma Gandhi led the first mass-based and nation-wide non-violent Jihad viz. Khilafat movement in 1919 to restore Caliphate. Though Sykes and Picot made sure that caliphate in the Middle East is reduced to a fable which would regale the posterity, but in India the mass awakening of Muslims on religious lines led to the creation of Pakistan, the first state based on the religious identity of Islam.

M J Akbar in his seminal work “Tinderbox-Past and Future of Pakistan” informs that though Indian Muslims joined the Gandhi’s jihad but they soon got disappointed with his non-violent methods and parted ways arguing that Jihad, as sanctioned in Quran is a violent war.  Given the fact that Indian Muslims joined Mahatma Gandhi’s non-violent Khilafat movement en masse, the fact of their reverence for the authority and concept of Khalifa cannot be denied.

Further, the India has a strong history of the ardent following of the Wahhabism, which is an ideological backbone of ISIS. Patna was a seat of Wahhabism in India and from 1800 to 1900 A.D. the British armies had to engage in most fierce battles with Wahhabi forces in NWFP under the leadership of Syed Ahmad Barelvi (1831). More recently, between 2011-13 INR 1700 crore have been channeled into India for Wahhabi proselytization by Saudi Arabia.

Furthermore, India is also a home to one of the most orthodox school of Islam called Deobandi School, often referred as Indian variant of Wahhabism and it is followed by Taliban. Off late the influence of Deobandi School is spreading fast across the country which could be found in the increasing number of Muslim women taking to Burqas, rejection of Sufi practices and the fast-spreading network of Deobandi mosques.

In such a milieu, ISIS with its projection of powerful Islamic symbols like Dabiq (doomsday prophecies speak of the final battle between Islam and Christianity at Dabiq), can actually attract a huge following in India also. And, the Koranic prophecies like Gajwa-e-Hind, which is about the final conquest of India by the forces of Islam, can be very powerful instruments in getting a following among Indian Muslims.

…the presence of ISI and its extremist proxies like Lashkar and JEM might act as congenial springboards for ISIS to launch itself in India.

The fact of religious appeal being the extraordinary powerful factor vis-à-vis other factors like economic deprivation, in drawing minority youth can be gauged from the fact that so far Indians who joined ISIS came from middle-income and educated backgrounds, for example, the Indian Oil engineer from Jaipur and the students from Hyderabad.

Bruce Hoffman, terrorism expert at Georgetown University, observes in “Foreign Affairs” that there is a strong possibility of the merger of ISIS and Al Qaida in future as the differences between them are on trivial ego-based issues and strong ideological similarities will make it very likely for both of them to come together.

In such scenario, it will be much easier for ISIS to gain a foothold in India because, Al-Qaida already has a  strong nexus with organizations like SIMI and Indian Mujahidin which by virtue of being indigenous, could play a linchpin role in facilitating the ISIS’s entry into India. Further, the presence of ISI and its extremist proxies like Lashkar and JEM might act as congenial springboards for ISIS to launch itself in India.

If we consider the factors like economic deprivation and integration, then also we do not have many reasons to feel happy about. Molanbeek type ghettos where radicalization, deprivation and crime go hand-in-hand are spread across the nation, in almost every city of India.

The rampant poverty, crime, and unemployment make it very easy to find targets for radicalization. Often, the reach and control of law-enforcement machinery in these areas is very poor so it is difficult to detect if any suspicious activity is going on. Along with such ghettos, India also has huge unauthorized markets from where it is very easy to buy explosive materials like hydrogen peroxide and fire-arms.

India is not all that far from ISIS, and she needs a focused and organized counter terrorism strategy.

Porous borders with Nepal, Bangladesh and Myanmar have the potential to make things worse. Incompetent police and state intelligence agencies are no matches to the terrorist groups, who are technologically advanced, skilled, and exposed to the dynamics of transnational terror operations.

Lastly, appeasement of Islamic extremists for political expediency  and the overly-soft and defensive  attitude of media and intellectuals in the politically correct  garb of  multiculturalism and democratic values puts the greatest hindrance in raising general awareness on  terrorism and adversely affects the morale of the security forces.

Hence, it can be argued that India is not all that far from ISIS, and she needs a focused and organized counter terrorism strategy. I would conclude with what Rosa Brooks, Georgetown Professor said that the terrorism is a problem to be managed and in order to do that the first and foremost thing we need to do is to have a nuanced understanding of terrorism and religious extremism. And, then we need a multipronged strategy to address the problem, which I will discuss in my next article.

Abhinav Pandya is a graduate in Public Policy from Cornell University. He has worked in political affairs, refugee rehabilitation, social capital and sustainable development in India and USA. He is interested in political affairs, counter-terrorism, religious extremism, international security, spirituality and comparative religions.

One thought on “Will ISIS get a foot-hold in India?”