Home  >  Spotlights  > Homeland Security  >  When the Defenders become Defenceless: The Irony behind AFSPA

When the Defenders become Defenceless: The Irony behind AFSPA 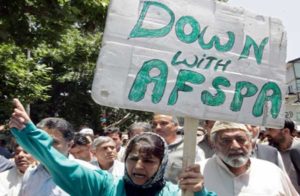 Is it not ironic that the State which wants a soldier to save it from its external and internal vulnerabilities, threats, and challenges, does not seemingly wish to provide an instrument of legal protection to the soldier tasked with the above-mentioned responsibility? That soldier, today, has been left to fight and secure his rights on his own. The issue of 356 army personnel (all ranks) knocking at the door of the Supreme Court of India expecting to get clarification on their legal protection whilst being deployed on internal security duties, which actually is a state of insurgency/ low intensity conflict in most of the areas where the Army has been deployed by the Government of India in consultation with the respective State.

To start with, it is vital to highlight two operational parameters out of a large number of issues that govern a military operation against the insurgents/militants/terrorists operating in areas that have been declared and classified as “Disturbed Areas” under the ARMED FORCES (SPECIAL POWERS) ACT, 1958 ACT NO. 28 OF 1958. The very first condition for it to be operational is a total breakdown of civil administration and its non-existence. Resultantly, there is less likelihood of finding a magistrate to either order or sign the requisition documents to call in the Indian Army as an aid to the civil authorities. And thus, the Army has to act on its own in these areas for which a constitutional provision had to be made. Either way, the situations of encounters develop without much warning and preparatory time, coupled with the rather apathetic and non-proactive approach of the civil administration and the state police.

All these operations are launched based on hard intelligence that is available from ground inputs. Secrecy and speed are of paramount importance for the successful conduct of these operations, since leakage of any information and of any magnitude, jeopardises the entire effort for the conduct of these operations. In this low-intensity war-like backdrop, is it practical to expect the Indian Army to go around looking for sanctions from the civilian administration (including co-opting the police) responsible for law and order or a magistrate with powers to issue arrest warrants?

Therefore, to cater for above contingencies an instrument called AFSPA was enacted in 1958 under an Act of Parliament so as to allow the Army to operate on its own when called in to ‘aid civil authorities’ under the provisions of this Act. This Act has seven clauses which have had their share of minor modifications over the years. In essence, these clauses have remained the same. One may miss the wood for the trees if an attempt is made to go over each of these in detail at this juncture. However, it is important to briefly bring out a few facts which are always wrongly interpreted and grossly misrepresented by human rights activists primarily to arouse strong public sentiment against the Act and the Army.

Special powers of the Armed Forces to the designated ranks, which Clause 4 of AFSPA stipulate: any commissioned officer, warrant officer, non-commissioned officer or any other person of equivalent rank in the armed forces. It is not a sweeping power provided to all soldiers operating in these areas unless acting in self defence (a power granted albeit to all citizens under the Indian Penal Code). Clause 4 further states that the use of weapons by Army is permitted to maintain public order but that too only after due warning to individuals or groups showing capabilities to use force to the extent of arms/explosives in order to violate public order/ laws in force by the state administration. Arrest without a warrant too is related to the capability of those individuals involved in committing such offences as are against the established order of the state.

However, the final caveat on all these arrests is that the individuals need to be handed over to the police within 72 hours or at the earliest possible opportunity so as to be dealt with under the law of the land. If this is not found satisfactory to the critics, Clause 6 states that the Central government’s permission may be sought to try soldiers in case they are found to have failed to act in ‘Good Faith’ as per the provisions of the AFSPA.

Statistics have revealed that on an average, almost 46 Indian soldiers die every year in insurgency/militancy/terrorism affected areas when they risk their lives to act against terrorists, even though with utmost caution and least collateral damage. In nutshell, the Indian soldier does require legal protection to operate in this war-like situation where there are no prescribed, or followed, rules of engagement (ROE) except one – whosoever spots the adversary first, presses the trigger and releases the bullet. Reality checks cannot be based on isolated cases of violations, for which due corrective measures are adopted and punishments meted out by the Army.

On July 8, 2016, the Supreme Court gave out an order that negated the protection against prosecution available to the Armed Forces under AFSPA.[i]  The Supreme Court also upheld its direction for mandatory registration of an FIR against Armed Forces personnel, even in disturbed areas under the Armed Forces Special Power Act (AFSPA) for every encounter death, despite the Centre pleading that this order could jeopardise efforts to maintain peace and security in such disturbed areas. In a later development, the Supreme Court while hearing a Public Interest Litigation (PIL) seeking a probe into 1,528 cases of extra-judicial killings in Manipur, on 14 July 2017, directed CBI investigations into 17 cases out of the total 42, where FIRs had been lodged and asked the CBI to appoint a Special Investigating Team (SIT) to probe into the ‘fake-encounters’. [ii] Subsequently, going by the slow and inadequate response of the SIT, on 12 February 2018, as per the Court’s directive, three representatives from the National Human Rights Commission (NHRC) was also co-opted.

There is a colossal difference between the “Army encounters” that mirror a war-like situation bordering on low-intensity conflict. These can never be compared to “Police encounters” as studies of late seem to suggest. Mainly because, in most of these “studies” or investigations, no Army representative has ever been co-opted to provide a hands-on ground evidence/information. In this case, how can the investigations be termed wholistic, and all-encompassing?

The 400 serving soldiers (the term “soldier” includes JCOs and officers of all ranks) who recently filed a petition in the Supreme Court, following the 356 serving soldiers, highlights the dichotomy of using the Army to raise nationalist passions whenever required, and thereafter, disown the same soldier in times like these.

While the court ruling will take its own time, let us not forget that the Armed Forces of a nation are meant to ward off external aggressions facing the country and not so much for internal security duties – nor is the Army’s prolonged deployment desirable internally. Any degree of insecurity to the soldier will directly result in the same degree of insecurity to the nation from its enemies in the long run.