What Ails our Internal Security?

India has been victim of cross-border jihadi terrorism for more than a decade. Jammu & Kashmir continues to be a boiling pot kind courtesy the proxy war launched by Pakistan and due to spread of religious fundamentalism. 83 districts in the hinterland spread among 9 states referred as “Red Corridor” are engulfed with Naxalism and are engaged in conflict with the State. The North-East continues to simmer with ethnic conflicts and insurgencies. “Intolerance”, Dalit versus Non-Dalit and minority appeasement are being used as tools by the political parties to engineer internal disturbances in the country.

The underworld is not only having adverse influence on our economy but is also involved in assisting terror outfits. Is it not a scary scenario?  Still as a nation we refuse to rise to the challenge, acknowledge presence of elephant in the room and yet do not have a National Security Doctrine and a counter-terror strategy.

Our security is vulnerable to threats both from across the border as well as indigenous home grown conflicts. While “National Security” is defined as the capability of a nation to use its national power for preservation, protection of its integrity and furtherance of its core values, national aims and objectives and is all encompassing, “Internal Security” is a part of the whole. Internal Security can be defined as “security against threats faced by a country within its national borders, caused by inner political turmoil, or provoked, prompted or sponsored by an enemy country, causing insurgency, terrorism or any other subversive acts that target innocent citizens and communities intended to cause violence, destroy or attempt to destroy public and private establishment.”

Thus, a very thin line separates the national and internal security threats requiring professional handling and dedicated response. Why is it that despite having the fourth most powerful military in the world (incidentally Pakistan does not find place in the list of Top 10) and approximately 9 lac strong Central Armed Police Forces, enemy agents and anti-national elements have turned the nation into a tinderbox? There is a need for serious introspection and if needed a thorough overhaul.

Unfortunately, the founding fathers of our Constitution did not use the word “security” and perceived the threat to nation as a function of “Defence of India” and “Public Order”. Accordingly the Union Government was entrusted with the responsibility of the former by including it in the Union List (List-1) and the responsibility to maintain “Public Order” was bestowed on the State Governments by placing “Public Order” and “Police” in the State List (List-3). This in my view is the bane of the problems affecting the security of our nation. Due to partisan politics and in the garb of “Federalism”, there is a continuous rift between the Union and State governments adversely affecting our internal security leading to un-coordinated and weak responses to the internal security threats particularly when they are sponsored by our hostile neighbour.

India faced its first major internal security challenge in early fifties in form of Naga rebellion. The police was found wanting in meeting the threat posed to nation’s integration and the Armed Forces had to be inducted. A few changes in the statute book were made giving birth to Armed Forces Special Power Act (AFSPA). Over a period of time the Central Government experimented with various legislations like MISA, POTA, TADA, UAPA-2008 and NCTC to empower the Union government but were met with stiff resistance from the states on the plea that unlimited powers to Police and Armed Forces can convert the country into a “Totalitarian State.” The net result being a weak internal security apparatus leading to destabilisation, poor governance, social and financial divide, unlimited corruption, separatist movements and sub-regional divide.

Is there a panacea to our ills or we are destined to continue to suffer and perceived as a “Soft” state due to our faulty political system? In my view there is need for radical reforms in our system of governance. Unity of effort, coordination, leveraging technology and centralised control are essential to thwart the challenge of contemporary   internal security threats. Most nations in the world have a dedicated interior ministry responsible for the internal security. The United States also as an aftermath of 9/11 created a Department of Homeland Security which despite continuous threats has been able to avert any serious terrorist attack since September 2011. Rajiv Gandhi also experimented for a while to have Arun Nehru as Minister of Internal Security albeit under the Ministry of Home Affairs (MHA).

After 26/11, another effort was made by then government in the shape of National Counter Terrorism Centre (NCTC) and National Investigating Agency (NIA) but while the former failed to see light of the day the latter was created but without the teeth once again falling victim to partisan politics. Pathankot terror attack, once again highlighted lacunae in border management, coordination, unity of effort, command and control and exposedthe hollowness of our internal security mechanism and glaring gaps in our national security. India also needs to have a nation-wide network of counter terrorism units and organisations under centralised control cutting across state boundaries and beyond partisan politics. In the succeeding paragraphs attempt is being made to suggest radical reforms in internal security management in our country.

First and foremost, “Public Order” needs to be replaced by “Internal Security” and shifted to Concurrent List (List-2) along with Police through a constitutional amendment. For dedicated response and centralised control we need to have a Ministry of Internal Security. There are two options. The present MHA is too large and unwieldy having six departments and 20 divisions with subjects as varying as border management, internal security, official language, awards and freedom fighters’ pension to name a few. Departments not related to internal security can be transferred to the other ministries and MHA rechristened as Ministry of Internal Security (MIS).

The other option is to create a separate MIS by transferring a few departments from MHA and other ministries with the task of acting as nodal ministry for internal security with capacity to secure its sovereign power, government, territory and population from all internal threats including sponsored terrorism. All forces engaged in internal security and counter-terrorism operations including Rashtriya Rifles should operate under the control of MIS. Similarly all intelligence agencies irrespective of their affiliations must report to the MIS through the NCTC.

All internal security forces must have their own dedicated cadre including higher ranks with expertise in their field. IPS officers should only be responsible for law and order and operate under the MHA. The officer heading the NCTC should provide single point advice to the Internal Security Minister. Thus, MIS be made responsible for security of India within the boundaries of the union and for coordination with the states and provided funds for capacity and capability building to ensure fool-proof internal security. Similarly, the Ministry of Defence (MOD) is made responsible for all external threats including the guarding of the national borders.

For this the border management should be brought under the control of the MOD. All forces currently involved in border defence should be merged into one force called “Border Defence Force” and made an auxiliary force of the Army. Border Defence Units should be organised, trained and equipped on the pattern of Indian Army units to ensure interoperability and thus becoming coherent first line of defence, in the true sense. Chief of Defence Staff should be the single point adviser to the Defence Minister in the matters of external security and border management. Armed Forces should not be employed for internal security. They should be trained and equipped to be an exclusive force to safe guard national borders and remain a “Threat in being” for nation’s potential enemies. 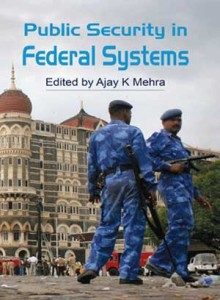 A few other recommended changes pertain to empowerment of investigating and prosecuting agencies. Indian Evidence Act needs to be amended to make admissible before a court of law any confession made before a police officer investigating a terror related case. While there is no denying the fact that investigation and control of crimes under IPC/RPC fall within the purview of States still in the national interest such crimes that have direct link to the terrorist activities and have trans-border and inter-state ramifications need to be brought under the ambit of NIA. NIA needs to be meaningfully empowered. Suggestion made by Governor NN Vohra regarding a dedicated Internal Security Administrative Cadre also merits serious consideration. The role of the State Police and its agencies should be clearly delineated while structuring the NCTC.

The time has now come when we need to break our traditional shackles and carry out a de-novo restructuring of our national security apparatus giving equal weightage to both the external and internal security. There is crying need to have a MIS that should be capable of handling all matters related to internal disturbances, social unrest, insurgencies, terrorist acts and proxy wars within the national boundary. Finally, a few words of caution, MIS without political will and state craft will be ineffective and no amount of reforms will be adequate unless the concept of “accountability” is strictly implemented.

2 thoughts on “What Ails our Internal Security?”