What after Uri attack? 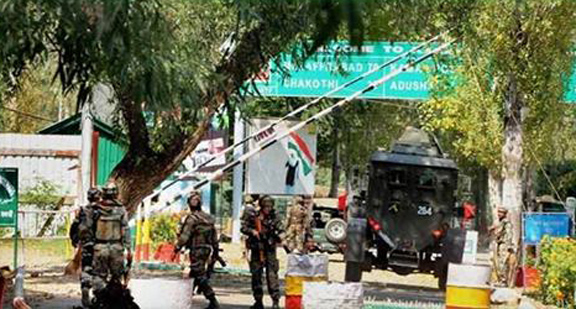 All five permanent members of Security Council have condemned the attack on Uri army camp. However, their language is not the same and condemnation messages are carefully worded. For example, China has issued a subtle warning that the CPEC should not meet with any damage.

Uri attack has happened because Kashmir traitors had begun lambasting Pakistan for her cowardice of not keeping the promise made to the fidayeen of launching massive attack on Kashmir once internal disruption and subversion reached its climax in the valley. Even China, keeping close eye on developments in the valley, was critical of Pakistan for letting Kashmiri traitors down. That is why China, the lone P-5 member, opposed designating Hafiz Saeed of LeT by the Security Council. The epicenter of Kashmir imbroglio has shifted to Beijing after Pakistan found her proxy war in Kashmir was turning a damp squib.

No doubt, the death of 18 soldiers is shocking and agonizing. However, it is not the one that endangers world peace. Moreover, the soldiers are from the Third World. Therefore, in the eyes of western countries, lip service is more than sufficient that India should expect. They will make U-turn if India strikes back. Be clear about it.

Five meetings of top political, military and security brass of the country have been held and Uri attack deliberated upon. One of these was chaired by the Prime Minister. It reflects sense of seriousness and urgency, definitely different from what we have seen in the past.

Pakistan is desperate that India should retaliate militarily. The attack was well timed to synchronize with the UN General Assembly meeting in NY. If India retaliated militarily and massively, Pakistan would find opportunity ripe to shed tears of feigned victimhood so that GA absolves her of terrorist state tag.

Any attack, call it surgical operation, pincer attack, blitzkrieg or whatever will prompt Pakistan for wide and deep retaliation. Pakistan will use the nuclear option without second thought just because she is impatient to get destroyed by India.

In a prospect of full-fledged India-Pakistan war, no world power will take sides. India has to fight it alone. China has no guts to come to physical rescue of her client state. In the process, this will be the only and the rarest of rare opportunities for India to destroy the CPEC by destroying all vital bridges over it particularly those on the Indus and the Jhelum.

Mind you, though many European countries and the US have had the bitter taste of terrorism, none of them wants international action plan against jihadism. Economic interests supervene.

For India Sino-Islamic terror will have to be fought single handed. This fight has to be fought by 125 crore Indians. First they need to wash off “non-violence” dirt from their minds.

While thinking of giving Pakistan a befitting reply, NDA government must, foremost of anything else, take care of the traitors within. The skunk of earth, the brandished proselytized politicos will try every perfidy to catch the Prime Minister on wrong foot and then stage midstream sedition. Don’t forget that sometimes back a Congress leader travelled all the way to Lahore to beseech Pakistanis to throw out Modi.

War on Pakistan will give great spurt to jihadis all over the world cementing their combined efforts, resources and manpower to launch the “Ghazavatul Hind” so strongly recommended by the hadith.  The US and Saudi Arabia will be the foremost among the mourners of the demise of the watchdog of their interests in Asiatic region.

The menace of terrorism needs to be fought first without fighting the war. That is a paradox but certainly achievable.  It is not out of cowardice but out of tactical option. US could never go after Osama if US intelligence had not roped in Pak army and ISI.

India has to work for disintegration of Pakistan. It is achievable. Pakistan herself has given enough fodder to her enemies at home. We need to apply Maoist formula that enemy’s enemy is a friend. Befriending Baluchs, Sindis, Seraikis, Shias, Ahmadis, Gilgatis and Pushtuns of Pakistan is a priority. That is the real combustible material in that country.

India should build the world opinion for demanding that the UN impose sanctions on her as a terrorist State. Worldwide media campaign has to be launched to expose Pakistan as a jihadi and a terrorist state. If the UN dithers, don’t rule out Pakistan’s naval blockade.

Terrorist training camps in and outside PoK have to be razed to ground in a blitzkrieg unparalleled in history. No chance is to be given to Pakistan’s nuclear war machine as the entire enemy structure is to be neutralized in a matter of seconds.

India will strike but the strike has to be calibrated. When, where and how, will be the choice of field commanders.

The Indian Home Ministry should set up a civil-military joint think tank comprising  retired/serving army top brass, retired and serving top foreign service echelons, academics with specialization in the region, ace media persons, all established nationalist opinion builders, and entrust to them the task of suggesting ways and means of dismemberment of the State of Pakistan. Knowledge, experience, technology and practicability should be the instruments for planning.

The Army chief has been asked to draw the plan along these lines. All the three Chiefs will sit down and chalk out the plan. The Cabinet will consider the pros and cons of the plan. Prime Minister will send his emissary to world capitals to apprise them of what India will be obliged to do. India may also broadcast an appeal to the entire Chinese nation to stop their government from supporting terror and jihad. This is what the ‘Ghazavatul Hind” or the Indian Grand Campaign of Islamic hadith is going to be. With this, the Kashmiri rats will rush to their earth holes for hibernation till Doomsday.

3 thoughts on “What after Uri attack?”