Home  >  Spotlights  > Geopolitics  >  Washington’s failed policy towards Islamabad: The worst is yet to come – II

Washington's failed policy towards Islamabad: The worst is yet to come - II 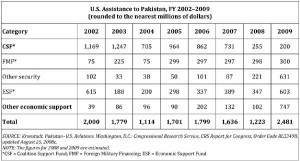 U.S. efforts to foster development in Pakistan have focused on education, health, financial stability and general economic development. In the immediate aftermath of 9/11, the United States supported the financial stabilisation already under way in Pakistan with significant budget support that helped the country pay off some of its outstanding debt. The focus of U.S. aid then shifted to more traditional development areas, including especially health and education. In 2007, the United States began a five-year $100 million program to support the government of Pakistan’s own efforts to improve education in primary and secondary schools. This program emphasised teacher training for primary education, especially in Baluchistan and Sindh. U.S. funds have also gone to improve the public health care system and, in particular, to maternal, child, and reproductive health. The United States also spent $70 million on humanitarian assistance in response to the October 2005 earthquake in Kashmir.

The United States Agency for International Development (USAID) continues to fund reconstruction projects worth $193 million in earthquake-affected areas. Earthquake relief is thought to have improved the U.S. image in Pakistan, but most Pakistanis still have a poor image of the United States. U.S. funds are provided both on a project basis and in the form of cash transfers to the government’s budget. There is some debate over the effectiveness of the conditions placed on the budget support, and there is concern that it may not go to supporting the intended programs. Such concerns have encouraged the United States to target the larger part of its development assistance to specific projects.

Operating conditions in FATA are difficult for aid workers of any origin, but especially for Americans. Widespread corruption increases the chances that U.S. funds will fall into the hands of militants.

The problems of militant groups and the porous Afghan border have led the United States to target an increasing amount of development aid to FATA. In 2006, Pakistan drafted the “FATA Sustainable Development Plan 2006–2015,” which aimed to foster economic development, extend the state, and enhance security in the region. The United States allocated $750 million over five years for this program. USAID also provides technical assistance in FATA as part of this plan, and it administers a range of specific programs to improve education and health care and to foster economic activity.

Some observers have been sceptical about how effective U.S. development aid to FATA can be. Pakistan’s own commitment to development in FATA has been weak; some fear that continued lack of attention to the region on the part of the Pakistani government will make it even more difficult for the United States to successfully implement its own programs. Operating conditions in FATA are difficult for aid workers of any origin, but especially for Americans. Widespread corruption increases the chances that U.S. funds will fall into the hands of militants. The FATA development plan is sometimes presented as a counterpart to the FATA security plan, but the two have, in fact, been developed independently of each other according to the Rand Corporation report cited earlier.

Meanwhile, in the United States, many are frustrated with the aid provided to Pakistan. They point out that Pakistan is at the centre of U.S. hopes to turn around the flagging Afghan war, but persistent anti-American feelings limit the extent of actual Pakistani cooperation. In a telling remark during her visit to Pakistan in July, Secretary of State Hillary Rodham Clinton mused that Americans must wonder “why we’re sending money to a country that doesn’t want it.”

Pakistani analysts are quick to point out that there are many reasons American aid has not created a positive image of America for an ordinary Pakistani. They cite poor coordination with the Pakistani government, a lack of understanding of Pakistan’s needs and a reluctance to produce iconic projects, lest they become targets for terrorists. “American assistance is always of a nature that is not seen or felt,” Tariq Fatemi, a former Pakistani ambassador to the United States told Griff Witte of the Washington Post on 24 August. “How many dams were built? How many highways? Can you touch anything that was built with U.S. assistance?” On the other hand, U.S. officials say aid money is making a positive impact, if not always a widely noticed one.

Continued…: Washington’s failed policy towards Islamabad: The worst is yet to come – III