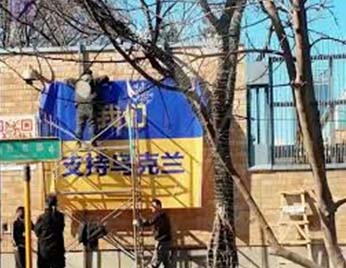 Leaders from around the world have found a new social media platform in their political battlefield over the war in Ukraine – Weibo, China’s equivalent to Twitter. While China’s Weibo users are jubilant for being the focus of “global attention for once.” For the Chinese government and its censoring agencies, the sudden explosion in foreign diplomatic attention on Weibo means a new challenge: how to strike a balance between how much to regulate and how to nurture the new found global attention which is fast becoming “key driver of China’s rising global influence.”

Last week, I wrote a piece on the Ukraine war becoming a new debating battlefield in China.In which, I mentioned that besides displaying “Solidarity Ukraine” signs at their entrances, most Western embassies in Beijing did not play a role in manufacturing public opinion in China on the war in Ukraine. However, thanks to a few friends in Beijing, it was pointed out to me how wrong I was. I was further advised to look up for a raging controversy unfolding in the Chinese media on foreign governments’proactive indulgence in “public diplomacy” in Chinese social media through their embassies’ verified accounts, respectively. As a Chinese digital new platform observed recently: “Any online space frequented by young Chinese, such as Weibo, Bilibili, Douyin, and Xiaohongshu, can be an important arena for public diplomacy, and they all have been used to varying degrees in foreign governments’ attempt to engage with and influence the Chinese public.”[My emphasis]

It must be pointed out, the global headlines recently drew our attention to how China is censoring online Ukraine debate, especially silencing views of citizens protesting against Russia’s invasion of Ukraine. As reported a few days ago, Jin Xing, a former popular talk show host and China’s first openly transgender celebrity told the international press her account on Weibo was suspended last week, after she published two posts, including one that made reference to Putin as a “crazy Russian man” and urged her followers to pray for peace. A day before, a report in the New York Times kept alive the story of how the war in Ukraine has “ignited enormous disagreements…in quips of [Chinese] social media ridiculing Mr Putin.”

Interestingly, not much has been reported in the world press on the “argy-bargy” the   foreign governments have got into in China’s online platforms through their embassies and diplomats on the current war crisis in Ukraine. It all started on the afternoon of February 15, when an official social media account belonging to British Prime Minister Boris Johnson issued the following warning to his 1.25 million followers: “We are on the edge of a precipice, but there is still time for President Putin to step back and think. We are urging everyone to engage in dialogue — the Russian government should avoid making a decision that would be a disastrous mistake for the country.”

Reacting strongly to the British PM taking to Sina Weibo – China’s largest social media platform, the Global Times minced no words in stating: “UK Prime Minister wants to influence Chinese netizens on the recent tensions between Russia and Ukraine.” The state-controlled “hawkish” news daily further reported, saying Prime Minister Johnson’s post received 32,000 comments within 24 hours, but most reactions were filled with sarcasm and criticism of “ridiculous move” of shouting at Putin on Sina Weibo. While other reports claimed “many Chinese social media users were bemused by the British prime minister’s post, preferring to ask him about Sherlock Holmes.” According to a Chinese researcher with the China Academy of Arts, “the bemused reaction to Johnson’s post from the intended audience was not at the message itself, but more on the medium: Chinese microblogging platform Weibo.”

At another level, some foreign media started calling Russia-Ukraine “battlefield” in China’s social media as Weibo Diplomacy. Following the British prime minister’s post, several countries including Ukraine, Russia, France and Germany, among others too shared statements on Weibo. This elicited interesting reactions from some Chinese Weibo users who “enjoyed being the focus of global attention” and joked that “whole world loves to speak Chinese.” Moreover, in the welcomed silence on the part of China’s cyber regulators – it took almost three weeks before the authorities in Beijing woke up and began tightening screws on social media posts condemning Russia or Putin – the hashtag “Solidarity Ukraine” briefly topped the platform’s trending topics list.

Overall, in China, where the internet is heavily censored and most foreign media is restricted, the unfolding of Weibo Diplomacy has thrown up a new challenge to the country’s cyber regulatory authorities. That is, as China’s social media receives greater world attention in global affairs, it would mean China’s rising importance in international affairs. Already foreign NGOs, foreign governments and non-governmental actors are engaged in public diplomacy on Chinese social media. “American lobbying groups have also taken to Chinese platforms to advance the interests of their clients and members. Sometimes these interests overlap with those of the United States government, but sometimes they merely reflect the goals of multinational corporations or business leaders,”a Chinese newspaper quipped.

Finally, putting into perspective the international war of words in Chinese social media, Shanghai International Studies University Professor Yang Cheng said: “Growing Western perception that China and Russia are in the same camp and more countries attaching importance to China, are two possible reasons why world leaders are taking to Chinese social media to share their views.” Their [Western leaders] voices can be heard in the English speaking media, but as China’s role has been growing in global affairs, the world leaders feel greater urgency to explain their viewpoints in the Chinese-speaking world, Yang added.