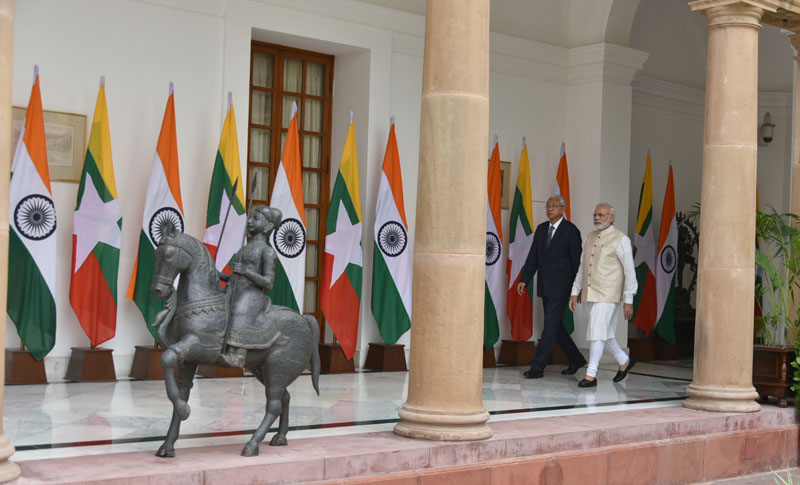 Prime Minister Narendra Modi with the President of Myanmar Htin Kyaw at Hyderabad House, in New Delhi on August 29, 2016.

Myanmar President U Htin Kyaw paid a decisive visit to India at the invitation of President Pranab Mukherjee from 27 to 30 August 2016. This was the first contact between the top leadership of the two countries. The visit underscores the importance that Myanmar attaches to relations with India. It would also be pertinent to remember that President Kyaw is a loyal aide and confidant of Aung San Suu Kyi – the de facto leader of Myanmar.

The reason Kyaw was anointed to the top office of President is because Suu Kyi herself could not assume that position due to a constitutional provision that debars those citizens whose spouse or children hold foreign nationality from occupying the highest office. Since Suu Kyi’s sons hold British citizenship, she could not become President and instead chose her devoted follower U Htin Kyaw to assume this onerous responsibility.

Both sides availed the opportunity to conduct wide-ranging and extensive talks on all facets of bilateral relations. The most important message conveyed to President Kyaw was that by Prime Minister Modi who, in his Statement after the bilateral talks held in Hyderabad House, stated that “at every step of the way, 1.25 billion people of India will stand by you – both as partners and as friends.” This was a message both in the context of bilateral ties and in the regional context of providing balance and counterpoise to the increasing influence of China in Myanmar’s affairs which often makes Myanmar citizens and leaders wary and nervous.

During the comprehensive talks between the delegations led by Modi and Kyaw, the issue of security and stability along the 1640 km long land border shared by the two countries received special attention. External Affairs Minister Sushma Swaraj had also taken up this matter during her one day visit to Naypyidaw on 22 August. She was reassured by President Kyaw himself that Myanmar’s territory will not be allowed to be used for attacks against India.

India was receiving Myanmar’s full cooperation on this issue even when the military junta was in control. With Suu Kyi’s dispensation, this support is expected to continue with the same steadfastness and sincerity. Myanmar’s commitment to India’s security was reiterated during President Kyaw’s visit. Both countries also emphasized the importance of sound border management as an intrinsic element of maintaining border security, peace and stability along the entire length of their common border.

Myanmar fulfils a vital role not only in ensuring and promoting peace and security in northeast India but also in its economic growth and well-being. Two out of the four Agreements signed during President Kyaw’s visit relate to improving connectivity between northeast India and ASEAN through Myanmar. The first is the India-Myanmar-Thailand trilateral highway, which should have been completed and made functional by 2015. But the project has been heavily delayed. It is now expected to be completed only by 2020 since 69 bridges are yet to be constructed.

The second relates to the upgradation of the road segment between Kalewa and Yagyi. Early completion and operationalisation of the Kaladan Multimodal Transit Transport Project by December 2016 was highlighted. Both countries expressed their resolve to strengthen maritime security cooperation in the Bay of Bengal. Myanmar is the fulcrum that will determine the success of the ”Act East Policy” launched by Prime Minister Modi in Naypyidaw in November 2014.

During President Kyaw’s visit, it was decided to strengthen engagement in the economic and commercial spheres, including agriculture, banking, power and energy, and trade in pulses. Both countries agreed to expand cooperation in oil exploration and hydrocarbon pipeline construction by Indian companies.

India offered to share its experience of creating institutions for a vibrant and responsive democracy as also ways to deal with relations between the Centre and the States and Regions as well as ethnic and religious minorities. India expressed support for the national reconciliation and peace process of the Government of Myanmar under the “21st Century Panglong Conference”.

Developmental cooperation including capacity building, education, healthcare, infrastructure and strengthening of institutions in Myanmar were given an impetus during President Kyaw’s visit. Both countries noted with satisfaction the substantial support provided by India in the area of construction of several hospitals, IT, agriculture services, etc. Further, cultural cooperation and academic exchanges were provided significant emphasis during the discussions.

While noting with satisfaction the positive discussions and agreements reached between the two countries, it is pertinent to remember that State Counsellor, Foreign Minister and veritable head of Myanmar Aung San Suu Kyi chose China as the first country for her visit. She paid a 5-day successful visit to China from 17 to 21 August 2016. During the long period that Suu Kyi was incarcerated and under house arrest, she was extremely critical of China’s support for the military junta. But the responsibilities of governance and administration appear to have forced her to revise her viewpoint regarding China. She seems to have recognised the inescapable necessity of mending fences with Beijing and maintain normal, cordial ties.

Maintaining domestic peace and ensuring economic prosperity and growth are the fundamental reasons for Suu Kyi to revise her opinion and to respond positively to China’s overtures. Myanmar shares a 2000 km plus long border with China. The border region between the two countries is inhabited by several ethnic groups who have not entered into a peace agreement with Naypyidaw. China can play a significant role in ensuring that these groups maintain peace and tranquillity along the border and do not derail the domestic development agenda of the NLD government. China’s support for the success of the Panglong Conference on 31 August 2016 to bring peace amongst the embattled ethnic groups is considered vital.

Moving ahead with the bilateral relationship

India was late in reaching out to Suu Kyi after her assumption of power in March 2016. China’s Foreign Minister, Wang Yi, was the first foreign leader to reach Naypyidaw on 5 April, within a week of the NLD Government’s assumption of office. As against this, External Affairs Minister Sushma Swaraj was the first senior Indian leader to visit Naypyidaw for a one-day visit on 22 August, a good four and a half months after the NLD government was sworn in.

India has started out late but can make up for lost time by focussing on the task ahead with determination. Both countries share a rich heritage of civilisational, religious, economic and cultural ties, which have the capacity to provide a strong impetus to the nascent relationship.

Suu Kyi will visit India in October for the BRICS-BIMSTEC Summit during which she will get an opportunity to meet Prime Minister Modi and other world leaders.

Strong and wide ranging relations with India serve Myanmar well, both for its peace, security and economic development as well as to offset the closeness with China which has the possibility of making the Myanmar people and leadership apprehensive and uneasy.

A democratic and popular government in Naypyidaw provides greater opportunities to India to engage in a mutually beneficial partnership. The message President Kyaw took back from New Delhi is that India stands ready to support Myanmar in every possible way on its march to security, reconciliation and prosperity. As Prime Minister Modi noted, ”A bright future for Myanmar is not just your objective. It is also our aspiration.”