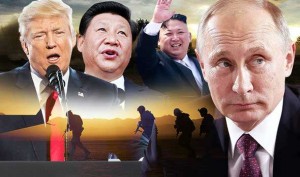 It is conventional wisdom that China’s role would be the most crucial in the process of de-nuclearising North Korea. North Korea and China share strong historical connections along with political and strategic mutual needs. Given how nearly 90 per cent of North Korea’s external trade has been with China alone in the past few years, the salience of this wisdom cannot be exaggerated. For North Korea, China is definitely the most important country, providing a credible and continuous economic and military backup, despite the fact that on occasion, Beijing faces discomfort and annoyance arising from Pyongyang’s provocative and isolationist behaviours including its nuclear and missile programmes.

After coming to power, US President Donald Trump first tried to squeeze North Korea by courting China on the basis of these few discords between Beijing and Pyongyang. On several occasions, Trump profusely praised Chinese President Xi Jinping for his cooperation in dealing with North Korea and appealed for more of it. Trump correctly realised that his policy of ‘maximum pressure’ on North Korea could not succeed without China’s cooperation. There are opinions that the US tried to at least postpone disagreements and contestations with China in most of the contentious issues. China also obliged by placing more restrictions in its economic transactions with North Korea.

However, in early 2018, North Korea surprised Trump when it agreed to hold direct talks with the US to give up its nuclear weapons in exchange for a security guarantee. After few hiccups, the historic summit between the leaders of the US and North Korea finally took place in Singapore on 12 June 2018. Even though both have been maintaining contact with each other, the US and North Korea do not sufficiently trust each other. For the same reason, just a few days before the Singapore summit, Trump declared that his proposed meeting with North Korea’s leader, Kim Jong-un, might not happen–and eventually, the process was brought back on the track thanks to South Korean intervention. China appeared less active in this phase as North Korea, South Korea and the US were apparently making all the moves.

Unlike during the previous occasions, the US’ engagement policy towards North Korea did not involve sufficient communication with China, and Beijing was not given much of a space and role in the process. However, the occasion provided a golden opportunity to North Korea for reaching out to China–and Pyongyang immediately grabbed it. In fact, Kim Jong-un visited China both before his first summit meet with South Korean leader Moon Jae-in in April 2018 and also before his Singapore summit with Donald Trump in June 2018. Overall, the North Korean leader has met Xi Jinping three times in the last six months and some other important high level visits between North Korea and China have also taken place.

Basically, North Korea has cleverly utilised growing frictions between the US and China in 2018 on trade and other strategic issues. In last few months, the US accused China for not doing enough towards resolving the North Korean nuclear and missile issues; raked up the Taiwan issue; and more importantly, imposed trade restrictions on China. In March 2018, the US signed the Taiwan Travel Act; and in August 2018, Taiwan’s President Tsai Ing-wen made stopovers in the two US cities–Los Angeles and Houston–during her trip to Central and South America. By early July 2018, the US and China had imposed tariffs on US$34 billion worth of goods from the other countries, and on 7 September 2018, Trump threatened to add another US$267 billion worth tariffs on goods imported from China. In a way, the US has touched upon two extremely sensitive issues for China–Taiwan and trade–and Beijing must be highly annoyed by Washington’s policy and moves.

Trump anticipates that he may create gap between North Korea and China by being soft towards North Korea but tough on China. The US policy was evident, when on 9 July 2018, Trump tweeted that he is confident ”that Kim Jong Un will honor the contract we signed &, even more importantly, our handshake” but blamed that “China, on the other hand, may be exerting negative pressure on a deal because of our posture on Chinese Trade-Hope Not!”

US Secretary of State Mike Pompeo alleged that ”China has relaxed sanctions against North Korea” and that there have been complications in achieving North Korean de-nuclearisation because of Chinese behaviour. Unfortunately, the US strategy towards deal with North Korea alone does not appear to succeed. The US needs to go back to the conventional wisdom which demands working with China to resolve the North Korean issue. The US needs take a more in-depth, patient, innovative approach to devise a mutually acceptable quid pro quo with China rather than venturing alone.