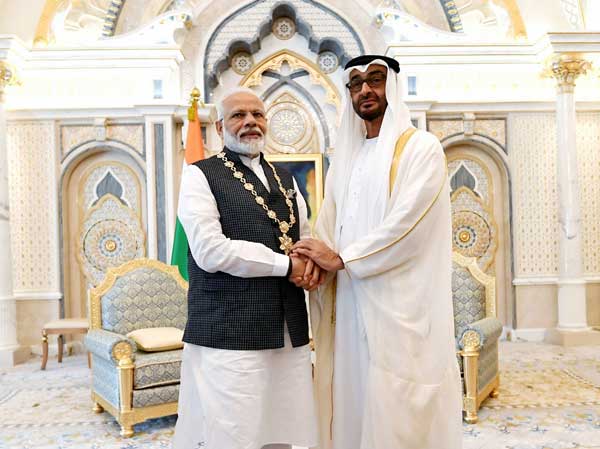 All hell broke loose as the news of Prime Minister Narendra Modi being conferred ‘Order of Zayed’ the United Arab Emirates’ (UAE) highest Civilian Honor reached Pakistan. The Pakistani social media trolls ran #shameonUAE campaign on twitter, vented out their frustration, wrote all kinds of expletives, abuses for Prime Minister Narendra Modi and UAE King; did not even spare their own Government which was subjected to utmost ridicule. Pakistani Govt had to react in some way, and they did. Senate Chairman Sadiq Sanjrani cancelled his trip to the UAE, adding that “it would hurt the feelings of the Kashmiri people”.

The countries like UAE want to pursue secular policies in this era of globalization and have chosen the right course to peace and development by investing in education and healthcare.

Pakistan’s agony did not end here . After completion of his visit to UAE Prime Minister Narendra Modi reached Bahrain where King Hamad bin Isa Al Khalifa conferred its top award ‘The King Hamad Order of the Renaissance’, to him who “humbly” accepted it.

There are certain hard facts. Indian diasporas amount to nearly 30% of UAE’s population that holds and contributes to its economy. The UAE is India’s one of the largest trade partner that amounts to 50 billion dollars per year. India needs energy security and strategic reserves of crude oil. The UAE needs a long term oil trade with a big market like India in the times when shale oil revolution has reduced USA’s interest on gulf. The UAE’s sovereign wealth is approx $792 billions. It needs a country with sustained high growth rate with stable future. India offers a dream picture with around 8% expected growth rate of GDP by the year 2020.

The UAE is an open economy with high trade surplus and per capita income. But UAE in spite of being one of the largest oil producer globally, it has been pursuing a policy of economic diversification. It is working on a strategy is to increase investment in industrial and export oriented sectors, transport, tourism aviation, petrochemical and renewable energy thereby reducing the share of GDP based on of oil and gas output to 25% only. This would sound unbelievable for an ordinary analyst that a gulf country like the UAE, mostly known for oil export, has other sectors to contribute 75% of its economy !

The UAE have a large expatriate work force and ,therefore, have set out an economic diversification that would create more job opportunities not only for their own countrymen but also for the immigrants. The UAE’s look east policy and India’s look west policy have converged here.

The UAE is no longer interested in Pakistani jihadi agenda. This is where Pakistani establishment probably miscalculated…

India had already entered into a ‘strategic partnership’ with UAE in the year 2015 when a joint statement by UAE and India was issued during the visit of Prime Minister Narendra Modi from 16-17th August 2015 . It mentioned that;

“the two nations reject extremism and any link between religion and terrorism. They condemn efforts, including by states, to use religion to justify, support and sponsor terrorism against other countries. They also deplore efforts by countries to give religious and sectarian color to political issue and disputes, including in West and South Asia, and use terrorism to pursue their aims”.

“coordinate efforts to counter radicalization and misuse of religion by groups and countries for inciting hatred, perpetrating and justifying terrorism or pursuing political aims. The two sides will facilitate regular exchanges of religious scholars and intellectuals and organize conferences and seminars to promote the values of peace, tolerance, inclusiveness and welfare that is inherent in all religions. Denounce and oppose terrorism in all forms and manifestations, wherever committed and by whomever, calling on all states to reject and abandon the use of terrorism against other countries, dismantle terrorism infrastructures where they exist, and bring perpetrators of terrorism to justice”.

These are important declarations that reflect all together a new level of relationship between UAE and India. The UAE is no longer interested in Pakistani jihadi agenda. This is where Pakistani establishment probably miscalculated otherwise they would not have made frantic efforts to give religious and sectarian colour to a political and constitutional issue pertaining to State of Jammu & Kashmir in their emotional appeal to Islamic countries in general and UAE in particular,

If we look at the relationship between Pakistan and gulf countries in past decades, we find that Pakistan pocketed billions of dollars from all gulf countries during their nuclear program in the name of Islamic nuclear bomb. These countries were given a false picture of Pakistan Army being the extended army to the gulf countries.

However during Yemen crisis, gulf countries wanted Pakistan to send it troops to Yemen. But Pakistan declined letting down the Arab countries who felt cheated. Pakistan’s Parliament refusal to send troops to supplement Saudi led coalition to fight Houthis in Yemen particularly angered the UAE. As a result, war of words unleashed between Pakistan and UAE in recent past. The UAE’s foreign minister was humiliated by Pak media on charges of blackmailing Pak. The UAE workers were attacked in Kandhar by Pakistani supported Taliban leading to further souring of the relationship between UAE and Pakistan.

It is agonizing for Pakistan to see that UAE has moved on and so have many other Islamic countries. Its over reliance on OIC, UAE and Turkey in campaign against India is not yielding the results, it expects. Its clarion call for jihad for Kashmir is too falling on deaf ears. Pakistan is left with no option but to see the writing on the wall, recalibrate its foreign policy imperatives and question itself as to why it is finding itself isolated even within the Islamic fraternity. Howsoever it may hurt Pakistan, the bottom line is that conferring Prime Minister Narendra Modi the ‘Order of Zayed’ shows the importance the UAE places on India for various counts.

Pakistan has unfortunately been left behind; so much so that even a call in the name of religion is not reaching the ears of so called Muslim brothers.

The Pakistani analysts would like to believe that it is because of India’s being third biggest oil consumer and supplier of a work force that sustains UAE economy. But the truth is more than this simple binary. It is of the fact because even the gulf countries look upon suspiciously and have serious reservations on Pakistan’s role in promoting terrorism in the name of Islam and jihad, and secondly, gulf countries do not buy the argument of being protected by the Pak army and its Islamic bomb, the Pakistani claims of being their protector notwithstanding. These countries have other diplomatic options of securing themselves and they are not dependant on Pakistan.

The countries like UAE want to pursue secular policies in this era of globalization and have chosen the right course to peace and development by investing in education and healthcare. Pakistan has unfortunately been left behind; so much so that even a call in the name of religion is not reaching the ears of so called Muslim brothers.

One thought on “UAE honours Indian Prime Minister: A clear snub to Pakistan”