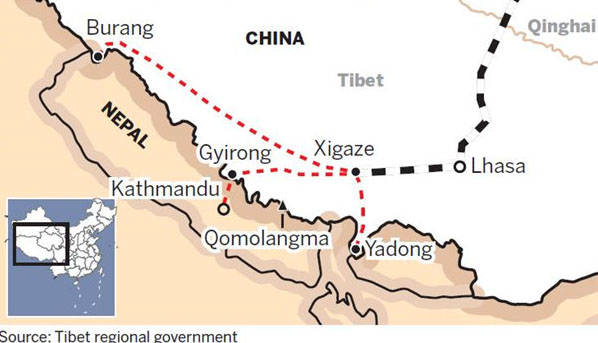 The China Daily reported today that a new ‘Himalayan rail route’ has been ‘endorsed’ by Beijing.

According to the Chinese official publication: “A Himalayan train ride at more than 100 kilometers per hour at the foot of the world’s highest snow-capped mountains and oldest glaciers is no longer just a dream.”

Nothing seems new in this!

But the map accompanying the article (see above) shows the rail line reaching two places near the Indian border, namely Purang (Burang for the Chinese and Taklakot for the Nepalis,) north of Pithoraghar district of Uttarakhand and Yatung (Yadong) in the Chumbi valley, adjacent to Sikkim.

I have often mentioned on this blog the Lhasa-Shigatse-Kyirong railway as well as the ‘colossal’ project of a railway line between Lhasa and Chengdu, via Nyingchi and Southern Tibet.

The China Daily quotes that ‘Chinese railway experts’ as saying: “With more than 19,000 km of high-speed — up to 350 km per hour — railways, China has accumulated the technology and experience to build a rail link between the Tibet Autonomous Region and the South Asian subcontinent.”
Now, the question is why and how ‘South Asian subcontinent’ comes in the picture?

Ma Jiali, a well-known Chinese ‘India expert’ and a researcher at the China Institutes of Contemporary International Relations explains that “a trans-Himalayan railway would be of great economic value as it could later connect China, the largest economy in Asia, with India, the continent’s third-largest economy.”

Has India been consulted?

Probably not; however Beijing goes ahead with the project of connecting India …and Nepal which: “is willing to have a more convenient link to China because it believes that China’s development will offer great opportunities for Nepal,” comments Jia.

The China Daily gives some details: the Himalayan railway would start from Shigatse, Tibet’s second city and move towards Kyirong, at the border with Nepal “and extend into Nepal, although it would not be a high-speed railway.”

This announcement came during a forum organized by the China Tibet logy Research Center in Beijing.

The Railway on the Plateau … and Kathmandu

The China Daily reminds its reader that “In 2006, China built a railway running for more than 1,100 km to connect the highland region of Tibet with the rest of the country” and in 2014, Beijing built a 250-km rail link between Lhasa and Shigatse.

The line will then continue to Kathmandu, “as part of the China-Nepal international railway.”
This has serious strategic implications for India, as Beijing would like the land-locked country to be part of the Belt and Road Initiative, while  “boosting economic, cultural and religious communication with Nepal”at the same time.

Zong Gang, deputy director of the Science and Technology Department at Beijing University of Technology told The China Daily: “The construction of a railway crossing the Himalayan mountains is now economically and technologically feasible.”

On July 1, Lobsang Gyaltsen, the head of the Tibet Autonomous Region’s government in Lhasa announced that the rail link “is the most powerful way to help Tibet open up to South Asian countries.”

A link to India’s Border?

In March, when Premier Li Keqiang had met the then Nepalese Prime Minister K. P. Sharma Oli; the two leaders decided that China and Nepal should further discuss the continuation railway line to Kathmandu and “support companies conducting preliminary research.”

Two Chinese companies have already shown some interest in the project: China CAMC Engineering Co has proposed building a 121-km railway linking Kathmandu and Rasuwagadhi, near Kyirong and the China Railway Construction Corp has applied to Kathmandu for conducting a Kathmandu-Rasuwagadhi railway feasibility study.

The China Daily quotes Zhou Yuhui, a professor at Beijing Jiaotong University who had been on a field visit to the China-Nepal border: “There are rich tourism resources, including virgin forest, canyons and historical relics in Gyirong, which has hardly been developed. …While bringing tourists and businesses to Gyirong, which will help local people to escape poverty, the China-Nepal railway will also help … to make people more willing to integrate into modern life.”

But Beijing would not only link Tibet with Nepal, but India too would be included in Beijing’s new plans (without India being informed).

Ma Jia speaks of connectivity between China and India.

When China celebrated 50 years of the arrival of Qinghai-Tibet and Sichuan-Tibet roads to Lhasa in 2014, Ma Jiali had said the two highways were crucial for the national unity: “I think it’s safe to liken the two highways to blood as they hold Tibet and the inland cities together. So, the running of the two highways, in a sense, has held the central government and Tibet together.”

There is no doubt that in the 1950s, the 2 highways (plus  the Tibet-Xinjiang Highway cutting across the Aksai Chin, a few years later), helped China consolidate its military position on the Tibetan plateau. By the end of the 1950s, Beijing could take on India which had dared to give asylum to the Dalai Lama.
Today, more worrying than the content of the article, is the map attached to it. It shows the train continuing its journey to Purang (Burang), near the tri-junction Nepal-Tibet-India and Yatung (Yadong) in the Chumbi Valley.

The Purang leg will be a further step to connect Tibet and Xinjiang, through a railway line parallel to the Aksai Chin road (via the Indian territory).

The process and work will be made easier with the recent reforms of the People’s Liberation Army and the creation of Western Theater Command.

It is a worrying issue for India: is China really planning to open two branches of its Belt (leading to India)?
Has India been watched carefully and ask questions to Beijing.