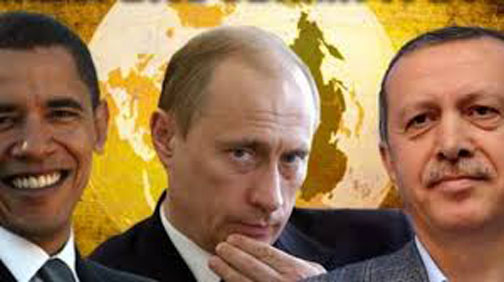 Two Turkish F-16s shot down a Russian Su-24M Fencer fighter-bomber at 9:24 AM local time on 24 November after it purportedly crossed into the Turkish airspace and ignored 10 warnings in five minutes to return to the Syrian airspace.

Based on the assessment of the detected heat signature of the aircraft, the US believes the Russian bomber was hit inside the Syrian airspace by the F-16s, albeit after a brief incursion into Turkish airspace.

The Turkish military released a map showing what it said was the flight path of the aircraft as it crossed into Turkey over Hatay Province, which abuts northern Syria.

Moscow has disputed Ankara’s version of events and said the plane was one-kilometre inside the Syrian border when it was hit. The aircraft subsequently crashed inside Syria, 4 kilometres from the Turkish border.

A Russian helicopter (Mi-8) was also shot at as it took part in the search for the two pilots near the Turkish-Syrian border and a Russian marine was killed in the incident. Russia has termed the incident a “planned provocation.”

The Turkmen tribesmen, who are ethnically linked to Turkey, have been seeking more support from Ankara in their fight against the Syrian regime. Turkey had summoned the Russian ambassador to protest about the Russian airstrikes on the Turkmen few days earlier and was planning to take up the issue at the UN.

Russia’s Foreign Minister has now backed a proposal by French President to close off the Syria-Turkey border to prevent the flow of fighters crossing the frontier. Turkey is very keen to retain access to and control of some of these crossing points into Syria.

A US official told CNN that a calculation shows the Russian aircraft would have been in Turkish airspace for 30 seconds or less as it crossed a roughly 3-kilometre wide section of Turkey that takes only 20 seconds to traverse.

It has also been observed that Turkey has not been clear on whether all the warnings to the Russian aircraft were delivered while it was in their airspace. According to a leaked letter written to the UN Security Council by the Turkish Ambassador, Turkey’s military justified the shooting down of a Russian bomber by claiming that the aircraft had entered Turkish airspace for 17 seconds.

Based on the assessment of the detected heat signature of the aircraft, the US believes the Russian bomber was hit inside the Syrian airspace by the F-16s, albeit after a brief incursion into Turkish airspace.

It can be said in support of Turkey’s position that on October 3 and 4, Russian Su-30SM and Su-24 jets had violated Turkish airspace repeatedly in the same Hatay province and Russia had admitted to the transgression. Also a Russian Su-30SM fighter had actively locked on its radar to the Turkish F-16s sent to intercept it.

From the military point of view, besides vowing to continue launching airstrikes along the Turkish border, Russia’s defence ministry announced that it was suspending its military cooperation with Turkey. Russia has also announced the deployment of its most advanced anti-aircraft missile, the S-400, to Syria.

The S400 system when based at Russia’s Khmeimim airbase near Latakia would easily provide cover up to the Turkish border including the area where the SU-24 was shot down. Other measures put in place by the Russian defence ministry include fighter escorts (Su-30SM Flanker) for bombing missions, and the deployment of the missile cruiser Moskva, which carries S-300s, to an air defence role in coastal waters of Latakia region.

…by shooting down the first Russian aircraft in decades by a NATO country, Turkey has managed to rally all the NATO members behind it; this at a time when the organisation is being increasingly criticised for lack of collective action.

Russia’s Foreign Minister has now backed a proposal by French President to close off the Syria-Turkey border to prevent the flow of fighters crossing the frontier. Turkey is very keen to retain access to and control of some of these crossing points into Syria.

The other retaliatory measures announced so far have been largely symbolic. Russian Foreign Minister cancelled his to Turkey and several Russian tour operators have announced that they were suspending sales to Turkish resorts. Russians accounted for 12 percent of all tourists to Turkey last year.

Russian news agency RIA Novosti reports that Russian deputies have submitted a bill to hold to account anyone who denies the Armenian genocide. This is a rather undisguised dig at Turkey which denies that the 1915 massacres constitute genocide.

Besides the fact that, by this action, Turkey has addressed the internal demand to take some action in support of the Turkmen being targeted by Russia’s airplanes, it has produced two significant outcomes.

One, by shooting down the first Russian aircraft in decades by a NATO country, Turkey has managed to rally all the NATO members behind it; this at a time when the organisation is being increasingly criticised for lack of collective action.

Two, it has spelled out the fault-lines in the Syrian conflict – between the pro-Assad and anti-Assad proxies – clearer than ever.

When Putin labelled Turkey as “accomplices of terrorists” after the incident, he was hinting at complex relationship which includes links between senior IS figures and Turkish officials. In this context, Turkey would be hoping that this tiff with Russia would bring the focus of the western military coalition back on removal of Assad in Syria which, post the 13/11 Paris terror attacks, has shifted predominantly to destruction of IS.

Second, by taking on Russia in this manner, Turkey is looking to reclaim leadership of the Sunni Muslims from Saudi Arabia and possibly, as some analyst believe, has embarked on a campaign to assert itself as a regional power.

Therefore, Turkey, to the detriment of its bilateral relations with Russia, could have presented the US and its Western allies an opportunity to contain Russia’s influence in Syria. Unfortunately, this might come at the cost of undermining the international efforts to create a broad military coalition with a common aim to defeat the IS.