Trends in Nuclear Modernisation and Strategic Choices for India

According to a new report published by Stockholm International Peace Research Institute (SIPRI) on 18 June 2018, the world’s total nuclear arsenal marked a slight decrease. Minuscule reduction in the total number of nuclear warheads came after both US and Russia lowered the numbers by 350 and 250 warheads respectively.[i]

Despite making a slight decrease in the number of warheads, the pace of modernisation still continues by replacement and modernisation of nuclear warheads, missile delivery systems and production facilities. “Making limited reductions to their nuclear forces, both Russia and the USA have long-term programs underway to replace and modernize their nuclear warheads, missile and aircraft delivery systems, and nuclear-weapon production facilities,” SIPRI stated. Further it added, “The USA’s most recent Nuclear Posture Review (NPR), published in February 2018, reaffirmed the modernization programs and approved the development of new nuclear weapons”.

The 3 per cent decrease in the number of nuclear weapons, from 14,935 to 14,465 was due to cutbacks by the US and Russia in keeping with the provisions of the implementation of the 2010 treaty on Measures for the Further Reduction and Limitation of Strategic Offensive Arms (New START). However, Russia and USA hold 92 per cent of the total nuclear weapons altogether. Today, nine states—the United States, Russia, the United Kingdom, France, China, India, Pakistan, Israel, and North Korea—possess nuclear weapons. 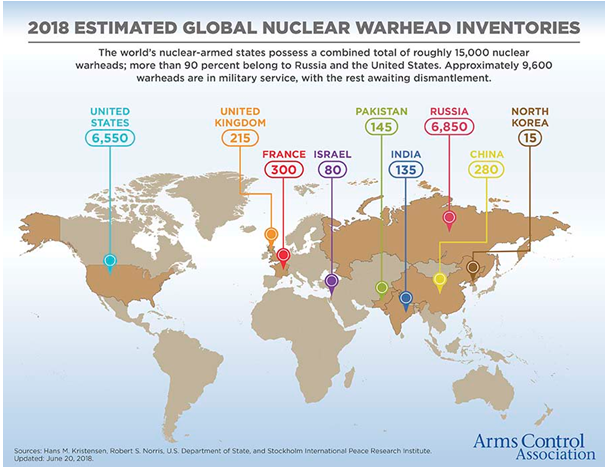 Asia is the only continent where the nuclear arsenal is growing given the fact that it only accounts three percent of the global nuclear arsenal. Contributing factor to steady rise in the number of the nuclear warhead is security situation in Asia. While India continues to face Chinese aggression on its borders, Pakistan fears a probable shift in India’s nuclear strategy towards counterforce targeting strategy from India. Thus, Pakistan continues to prioritize the development and deployment of new nuclear weapons and delivery systems as part of its ‘full spectrum deterrence posture’. While China, as mentioned in its Military strategy 2015, continues to modernize its nuclear arsenal as part of a long-term programme to develop more survivable and robust forces consistent with its nuclear strategy of assured retaliation. [ii] Not emphasising on the number of nuclear forces, China has been working extensively on delivery platforms and related technologies, including: intercontinental ballistic missiles (ICBMs), nuclear-powered ballistic-missile submarines (SSBNs), multiple independently targetable re-entry vehicles (MIRVs), manoeuvrable re-entry vehicles and hypersonic weapons. China’s intercontinental ballistic missile DF-41 is expected to be deployed in 2018, according to a state media. [iii] The DF-41 is expected to have range of 12,000 kilometres and a deviation of some one hundred meters. In addition to land-based nuclear deterrence, China is developing its first credible sea-based deterrent capability in the form of four JIN-class (Type 094) SSBNs, each capable of carrying 12 JL-2 submarine-launched ballistic missiles. The JL-2 missiles are MIRV-capable and have a range of 7,200 kilometres.

Undoubtedly the Chinese nuclear and missile capabilities are certainly ahead of India. Given the fact that one of India’s neighbour has fastest growing nuclear arsenal and the other is rapidly modernising its striking capabilities, modernisation for India is pivotal to ensure its credibility and survivability in Asia. Chinese and Pakistan nuclear nexus whichled to transfer of technology has always remained a reason for concern to India.With a fair amount of defensive strategy and a minimal offensive capability, it is imperative for India to pace modernisation of its nuclear forces. Irrespective of retaliatory choices in a conflict, Indian armed forces must intensify its pace of nuclear modernisation. Emphasis on advancement of missile technology rather than going after numbers can help in making its deterrence more credible. Strengthening survivability of ballistic missile capability with a more robust and proactive strategy can ensure an upper hand in case of any conflict.

China and Pakistan, both combined gives an approximate of around 425 plus nuclear warheads. Given the nuclear miscellany between the two in the past, India continue to face serious challenge from both sides. A robust Ballistic Missile Defense (BMD) capability can help India to fortify its population and industrial centres. It will further allow India to assess adversarial strategies, enhance surveillance on adversaries and act in response while complying with its no-first-use policy at the same time.

Till today, Chinese have been expanding their presence in military-space capabilities by military surveillance and weaponisation of outer space. Chinese new optical and radar imaging spacecraft as well as ocean surveillance and electronic eavesdropping satellites have been monitoring Indian ocean and military bases of the India, Taiwan and United States.[iv] China has also tested Anti-Satellite (ASAT) missile, weaponising itself with capability to destroy adversaries satellite. [v] However, in case of India, it has continued utilisation of peaceful space technology for civilian purposes and it is speculated that these technologies are at par with those countries which possess the capabilities of military surveillance. ASAT capabilities of India is still clearly unknown. India today, needs a more robust C4ISR technology with intensive capabilities of attacking enemy satellites, using ground-based direct ascent missiles to attack space assets, jamming signals sent from enemy satellites, using lasers to incapacitate enemy satellites, plasma attacks and, orbital ballistic missiles. Such capability will act as a strong deterrent in outer space with real time information sharing of adversaries.

The continuously evolving strategic competitions among the nations including India, China, Pakistan and beyond is leading to the rise of more complex war strategies yet stabilising the regions by strong deterrence against each other’s adversaries. Escalation of war to the extent of these technologies is highly unlikely today, but it is imperative for India to continuously evolve and pace its nuclear modernisation to be prepared against its adversaries in case of a conflict. The strategic objective of the Indian armed forces must incorporate near and long term military superiority/deterrence preparing itself for more than single front conflict scenario and thus maintaining internal peace and stability.

Note- The Sweden-based SIPRI, established in 1966, states it is an independent international institute dedicated to research into conflict, armaments, arms control, and disarmament. It provides research, analysis, and data based on open sources.