Home  >  Spotlights  > Military & Aerospace  >  Traditions and Customs of the Service

Traditions and Customs of the Service 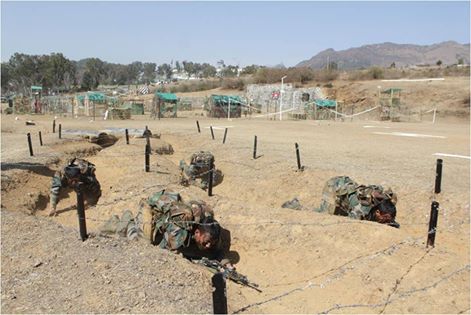 The code of honour that the Army follows is fostered through various customs and traditions which are legally and morally binding on every officer and soldier. Respect for seniors and juniors even when off duty; courtesy to all women regardless of their status; total truthfulness, dauntless moral and physical courage at all times are some of the norms which have been well established through a code of social conduct laid down by traditions and customs of the service. To be a true soldier one has to learn to be a gentleman first. Here, we will describe some of the customs of service to highlight the code of honour which the army follows on and off parade and the institutions or practices which help in fostering this code of honour.

An officers’ mess is a place where young officers and new entrants see and learn the basic courtesies and imbibe the noble traditions of the Indian Army. When an officer enters a mess he leaves his belt and baton outside, which symbolises the sword or other weapons carried in war.

The army is deployed in these areas under trying conditions because insurgents and terrorists take shelter in crowded towns or thick jungles.

The institution of officers’ mess was started sometime in the eighteenth century. The customs and traditions of gentlemanly behaviour were fostered and encouraged through this institution in younger officers. To avoid any undue controversies, politics and women are never discussed in an officers’ mess. Drinking is allowed but is controlled by the strict bar timings which must be followed. A senior officer who is appointed President of the Mess Committee ensures that mess customs are adhered to and decorum is maintained by the members.

A soldier must greet a fellow soldier or show a sign of recognition and respect to a senior. This is necessary to create comradeship and mutual respect among all ranks. This is achieved through saluting or greeting a comrade in arms. A junior salutes first and a senior returns his salute. Saluting dates back to many centuries and is a common feature of all armies of the world. In the old days opening the eye-piece (visor) of a helmet indicated a friendly gesture, as this required taking your hand to your forehead. Later this gesture became a salute. A salute also shows an open palm, indicating symbolically, that no hidden weapon is being carried.

Soldiers, even when not in uniform, are expected to greet each other by some gesture. In a battalion or a regiment this greeting may be ‘Jai Hind’ or ‘Ram-Ram’ or any other form of greeting followed traditionally. An officer always wishes a lady first regardless of the rank of her husband.

Style of saluting in the Army, Navy and Air Force is also a little different. An army man flashes his full palm parallel to the ground while saluting. Whereas a sailor keeps his palm downwards – facing the ground; perhaps not to show his grease-soiled palm to his seniors. An airman inclines his palm at 45 degrees while saluting. Also the sailors and airmen salute bareheaded whereas a solider only salutes when he is wearing a headgear.

Saluting dates back to many centuries and is a common feature of all armies of the world. In the old days opening the eye-piece (visor) of a helmet indicated a friendly gesture, as this required taking your hand to your forehead.

A soldier is expected to dress smartly according to laid down rules and regulations. He must appear smart and well-groomed on and off parade. Personal cleanliness, neatness of living quarters, even tidiness of vehicles is ensured through well regulated drills and procedures. You will seldom find a military vehicle not properly painted or cleaned. Smartness and cleanliness are a part of discipline and tradition of the armed forces all over the world. Our officers and soldiers staying even in snowbound areas maintain smartness and cleanliness as far as possible.

Drill is a part of army life. It instills instant obedience of command and makes a large body of troops act in unison. In the old days elaborate drills were followed on the battlefield in actual combat. Now these drills have been retained for ceremonial purposes. You must have seen soldiers marching in unison on Republic Day or other parades. Their smartness and precise drill movements reflect their dedication and discipline.

The proper way of saluting and marching etc. is also taught to individual and small groups so that good discipline and smartness become a second habit with soldiers.

A soldier learns to take pride in his profession and bears weapons with pride through the discipline inculcated on the parade grounds.

Infantry regiments have their own distinct ‘Battle Cries’. A battle cry is a phrase or a slogan which soldiers shout in unison while attacking an enemy post or defending a post from the enemy attack. It has tremendous inspiring effect on the troops who forget about personal safety and take unbelievable risks in carrying out the mission. History of warfare is replete with examples when a handful of men have fought off determined attacks by enemy despite being outnumbered. Battle cries of infantry regiments are listed in Table. 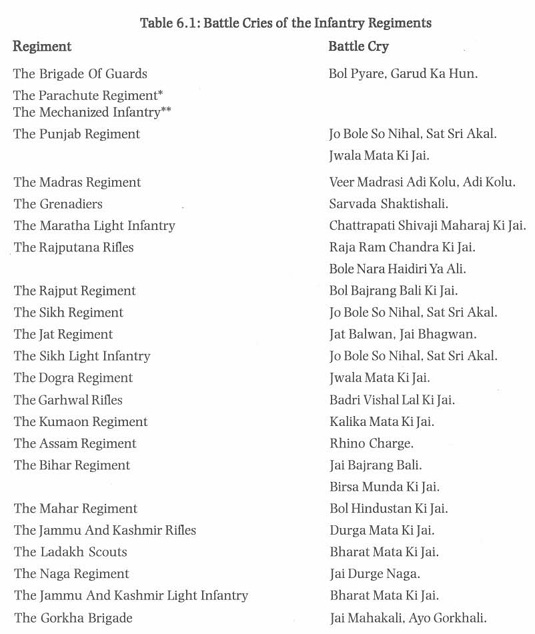 Note:
* The Parachute Regiment believes in carrying out task by stealth, and hence, do not use a battle cry.
** The Mechanized Infantry Regiment has been raised by converting one or two battalions from old infantry regiments and some battalions from the Brigade of Guards. Hence, each battalion uses the battle cry of its parent regiment.

A ‘battle honour’ is an official recognition of a battle in which a unit has participated with credit. The award of a battle honour is a source of pride and inspiration for future generation of soldiers. Battle honours are awarded in the following forms:-

A battle cry is a phrase or a slogan which soldiers shout in unison while attacking an enemy post or defending a post from the enemy attack. It has tremendous inspiring effect on the troops who forget about personal safety and take unbelievable risks in carrying out the mission.

One thought on “Traditions and Customs of the Service”