Time for Sharif to stand up and be counted 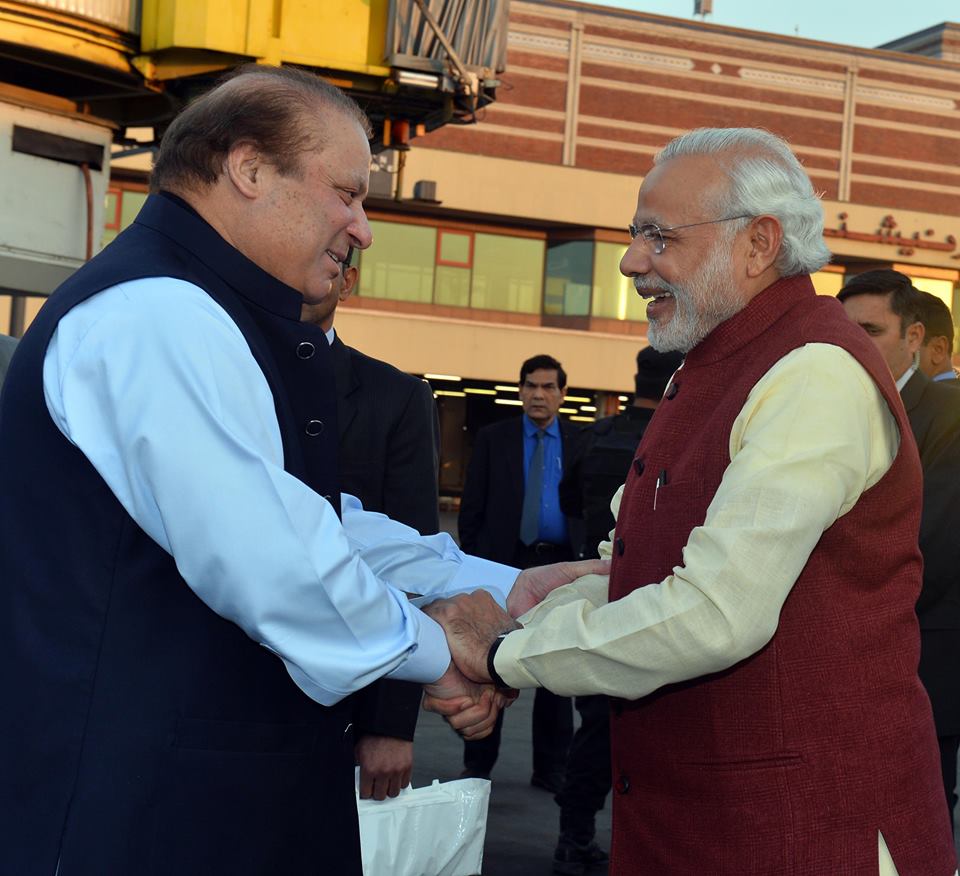 The impromptu visit of Prime Minister Narendra Modi to Pakistan to greet his counterpart Prime Minister Nawaz Sharif on his birthday has taken the world by surprise. In fact it has created a diplomatic history by virtue of its sheer boldness and diversion from convention. One thing that stands out is that the Prime Minister of India has the capacity to change the narrative. He is not bound by the staid bureaucracy and its run of the mill ideas.

In Pakistan, fundamentalist and militant organisations have roundly criticised Sharif for allowing the visit to take place.

Naturally an act of this nature would elicit responses from many quarters, both domestic and international. The opposition in India, led by the Congress, was quick to voice its reservations. What tangible results will accrue in Indo-Pakistan relations from the “flop-flop” policy being followed by the government asked the spokespersons of the party in debates that dominated the electronic media space?

In Pakistan, fundamentalist and militant organisations have roundly criticised Sharif for allowing the visit to take place.

The charge was led by Hafiz Saeed, the chief of the India centric terror organization Lashkar-e-Toiba (LeT). Expressing disappointment, he advised Sharif to desist from sacrificing Kashmir to maintain his personal friendship with the Indian Prime Minister. Opposition parties in Pakistan had a good word to say about the visit. They opined that it would add momentum for better relations.

The BJP has overcome its internal dissentions and spoken in favour of the initiative as one. The party patriarch, LK Advani, has gone public with his wholehearted support. The foreign ministry termed the visit as transformative.

Internationally, the visit was hailed as a statesmanlike gesture by the Indian Prime Minister that would pave the way for improving relations between the neighbours.

Prime Minister Modi has taken this huge step forward on the basis of his own conviction and desire to break the status quo on stalled relations between both countries. He has made a magnanimous, unconventional gesture to break the deadlock.

It is quite evident that both heads of state share a very vibrant personal chemistry that propels them to go beyond the ordinary in building a personal relationship which would benefit their two countries as well.

The rhetoric done away with, it is time to understand the ramifications. By this act, Prime Minister Modi has put the ball in the court of Prime Minister Sharif and now the whole world is watching with keen interest.

The move has the potential to strengthen the position of Nawaz Sharif within his own country vis-avis the Pakistan Army. The question is—will Sharif leverage the situation to strengthen his position? There is a fear about his proverbial vacillation and inherent fear of the army coming in the way of his exploiting the situation.

Whenever it comes to a head on collision with the army it is invariably the prime minister who backs down. The most harrowing thought at the moment is that that this time also things may be no different.

The Pakistan Army may have maintained a studied silence, but its stooges like Saeed are in a proactive mode and the government, by not taking any action, already seems to be going on the back-foot.

The fact that a terrorist like Hafiz Saeed can issue a strong statement within hours of the visit indicates the political mood in Pakistan. The Pakistan Army may have maintained a studied silence, but its stooges like Saeed are in a proactive mode and the government, by not taking any action, already seems to be going on the back-foot. This is not a very good sign.

By the middle of January, foreign secretaries of the two nations are scheduled to meet to discuss the modalities for carrying forward the composite dialogue announced during the recent visit of Indian External Affairs Minister, Sushma Swaraj, to Islamabad. Even though the decision of continuing the dialogue had been taken before this surprise visit by Modi to Lahore, the narrative of the talks will now change.

An increase in cross border firing, infiltration and terror incidents in the Kashmir Valley in the intervening period before the talks, followed by a rigid position on Kashmir during the talks will herald the much dreaded status quo between both countries and will cause severe embarrassment to both prime ministers.

While the Indian media and the Delhi chatterati are in free fall mode in the aftermath of the visit, the Indian soldiers deployed on the border are concerned.

They will have to step up vigil along the border, the Line of Control and in the hinterland of Jammu and Kashmir to fend off any misadventure that the Pakistan Army and its fundamentalist stooges would launch as a damage control exercise.  The prevalent extreme cold conditions are going to make their task even more difficult.

Prime Minister Modi has staked his political stature with this single visit. It is, of course, not the first time that he has taken such dynamic and out of the box decision, but this is definitely bigger than all the political risks he has taken earlier on the basis of his conviction and gut sense.

It is time for Prime Minister Sharif to stand up and be counted. He will have to ensure that his generals do not derail everything by increasing violence in Kashmir. In case he is unable to do so, he will abdicate his stature as prime minster and also demolish the goodwill that has been generated.

If Sharif succeeds in following a just and righteous path, then the talks will progress in accordance with established diplomatic norms with fair and sustained negotiations on all contentious points.

The bureaucrats will be aware that if they take rigid positions, they will be set aside by the two prime ministers, and hence, they will adopt a positive and conciliatory approach. There may not be any immediate gains, but a continued environment of trust and mutual accommodation will reap handsome results. Either way, the gesture by Prime Minister Modi will be seen as path breaking.