Thwarting the Threat of Nuclear Terrorism: India can lead the way 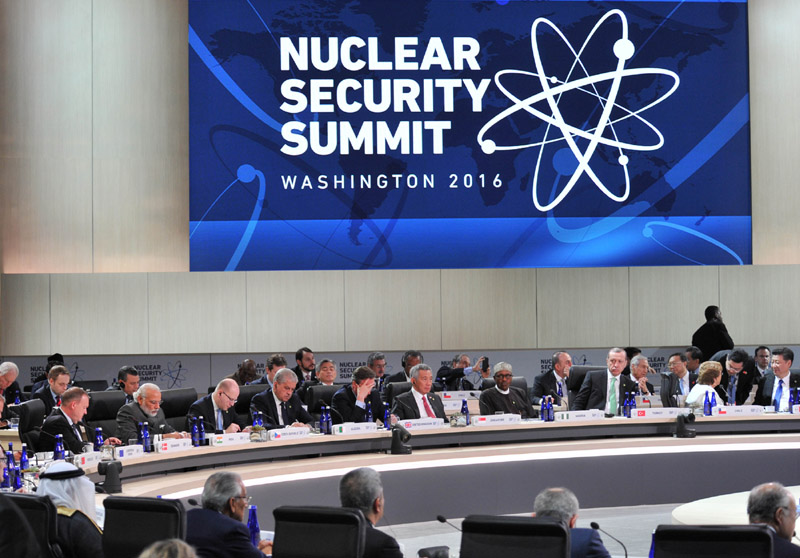 Prime Minister Narendra Modi at the Opening Plenary of the Nuclear Security Summit 2016, in Washington DC on April 01, 2016.

‘Global challenges demand global solutions’ is an oft quoted truism, parroted by many global leaders, but on which there is hardly any display of concerted action. Be it the implementation of the mutually agreed upon measures of the UN or even matters concerning mankind’s survival, much has been left at the level of talks, with hardly anything making it to the ground as substantial action. However, where international issues get unserious treatment, national interests on the other hand manage to spur serious action.

Reeling under serious terror attacks in Paris (December 2015) and now in Brussels (March 2016),  Europe, in particular, and the rest of the Western world, appears, for once, united;  standing up to synergize their resources and endeavors to combat the fast spreading scourge of jihadi terror with its looming nuclear manifestations.

US President Barack Obama, himself a recipient of the 2010 Nobel Prize for promoting global nuclear disarmament, just finished hosting his fourth Nuclear Security Summit (NSS) in Washington attended by as many as 53 nations. That the erstwhile, Cold War super power, Russia, chose to give this very strategic congregation a miss was disappointing; Iran’s absence from it, ostensibly on account of not having been invited for it, dealt a further blow to the aspirations and expectations from the Summit. After all, how can global cooperation to combat nuclear terrorism be effective if the second largest nuclear power, and an emergent one, were not taken on board? But then it is also a fact that since the last couple of years or so, Russia, under Vladimir Putin, has preferred to assertively chart its own course in global geo-political affairs.

Nearer home, Pakistan also backed-out at the last moment to attend the NSS. That in the NSS,  Pakistan would have been named if not shamed, for being the globe’s worst proliferators of nuclear technology and nuclear materials to nations like Iran, Libya, North Korea and Saudi Arabia had the country skipping this meet. The excuse for not attending this global meet was the recent highly unfortunate and dastardly terror attack on the hapless, minority Christians enjoying a rare Easter holiday in Lahore.  Accordingly, the Pakistani PM found  the Lahore terror attack a handy reason to shy away from a summit discussing nuclear security, safety of  highly  lethal fissile materials, nuclear technology and nuclear weapons – all those issues where Pakistan, by universal acceptance, has the worst record globally.

That Europe and USA already and even India, in the immediate future, faces the chilling prospect of nuclear terrorism from the Islamic State, Al Qaeda or their proxies will be stating the obvious. The terrorist attacks in Brussels had, reportedly, two terrorists from the group. If this terror group had succeeded in targeting this or any other nuclear installation in Brussels, the consequences would have been catastrophic. There are 400 nuclear stations, of varying sizes, across the world and thus, nuclear safety and security assumes critical significance warranting sincere and seamless intelligence sharing and security cooperation between nations.

In the NSS at Washington, Prime Minister Narendra Modi made an impassioned appeal to the global community, especially the nuclear powers, to cooperate in the global war on terror, and to “drop the notion that terrorism is someone else’s problem and that ‘his’ terrorist is not ‘my’ terrorist”. He candidly pointed out that terrorists were using 21st century technology but lamented that “our responses were rooted in the past”. PM Modi warned the global community that though “terrorism is globally networked, but we still act only nationally to counter this threat”.

The world has perhaps forgotten, by now, the clarion call given by India’s then youthful PM, Rajiv Gandhi, during a stirring speech at the UN in June 1998 for working towards total global nuclear disarmament. Till the world community arrives at such a hallowed consensus – idealistic, though not impossible – it has to be fully conscious of the apocalyptic threats emerging from nuclear terrorism.

India, on its part, has to be ever watchful of the hazardous shenanigans in neighboring nuclearized Pakistan, with its growing political instability and radicalization including in its establishment. Thus, the scenario, as also pointed out by President Obama at the NSS, of non-state actors stealing nuclear materials or rigging up a ‘dirty bomb’ or getting hold of a small  device like a tactical nuclear weapon cannot be ruled out. Significantly, Pakistan has always brandished its nuclear waywardness and rapidly growing nuclear arsenal to achieve deterrence from India which enjoys superiority in conventional forces over Pakistan. Without naming Pakistan, PM Modi at the NSS in Washington, pithily stated that the nexus of state actors with terrorists and nuclear traffickers posed a grave danger to many nations.

President Obama‘s initiative in convening this NSS has been universally acclaimed. At this summit, PM Modi complimented the US President by expressing that “by putting spotlight on nuclear security, Obama has done great service to global security.’

All civilized nations will agree with the simple summation that with grave dangers lurking across the world, it is time that rationality in nuclear policy and strategies guides the nuclear powers community. It is imperative that all stake-holders cooperate with the genius, resources and sincerity they can muster to thwart nuclear terrorism and prevent a nuclear Armageddon.

India, situated easily in one of the most violent expanses in the world, is afflicted by externally foisted terror since decades and now with also the footprint of global jihadism increasing inexorably towards its western flanks, has to remain ever vigilant. Notwithstanding Pakistan’s myopic anti-India policies and even China’s subtle machinations towards it, India will have to take the lead in  endeavouring to make South Asia a nuclear-terror free zone. Thus, an amalgam of statesmanship, a prudent foreign policy embellished with robust military strength, is the need of the hour. Importantly, India must also work towards achieving genuine cooperation among the global nuclear powers community to prevent a nuclear holocaust.

One thought on “Thwarting the Threat of Nuclear Terrorism: India can lead the way”