New Delhi’s portrayal of the humiliating defeat at the hands of Chinese in 1962  as ‘betrayal’ and ‘surprise’ is untrue. The pacifist Indian leadership that was crying hoarse from rooftops for friendship at any cost remained blind to Communist China’s repeated claims on Tibet and large part of Indian territories. Mao termed Tibet as the palm of a hand with its five fingers as Ladakh, Sikkim, Nepal, Bhutan, and NEFA. He claimed that these were Chinese territories that needed to be ‘liberated’. Tibet was ‘liberated’ by force while New Delhi slept.

The historical characteristics of the Chinese and the statements issued by the Communists from time to time clearly exposed their expansionist ambitions in Asia that spelt direct threat to India’s well being. Despite such overt indications, if we could not prepare ourselves to meet those challenges, the fault lies with us.  Instead of pretending to be surprised or betrayed, it is time we face the truth for the fiasco in 1962 and prepare our military for the serious threat posed by the Chinese.

Pacifist philosophies may be good for the individuals soul but are suicidal for nations security.

To Mao and the Chinese what singularly mattered was achieving the final goal. The means whether fair or foul to win were irrelevant. If New Delhi had deciphered what Mao was advocating in 1946 and studied the historical Chinese characteristics, alarm bells should have clearly rung in the South Block.

Mao repeatedly said from 1950 onwards that Taiwan, Tibet, and Hainan Islands were Chinese territories and they will be re-possessed. The predominant trait in this claim is the Chinese attraction for acquiring new territories. On take over by the Communists, maps depicting large parts of Korea, Indo-China, Mongolia, Burma, Malaysia, Eastern Turkestan, India, Tibet, Nepal, Sikkim, and Bhutan as Chinese territories were produced. Despite such demands, New Delhi always overlooked the basic fact that Communists inherited both, the traditional Chinese expansionism as well as imperialism.

Tibet and China that were part of Mongolian Empire at one point in history now became part of the Chinese Empire under Mao, in reverse order. Strangely, from this it follows that since Tawang or Sikkim which have been closely related to Tibet in the past, needed to be ‘liberated’ and made part of the new Chinese empire. If the leadership of independent India had bothered to study and understand the British mantle that was inherited, Chinese aims would become crystal clear- Mao the great strategist, always announced his goals publicly and never wavered.

Further Mao often quoted a famous Chinese saying, ” …If the east wind does not prevail over the west wind, then east wind will prevail over the east wind.” This clearly indicates another trait of the Han Chinese -their obsession to dominate other nations in their vicinity.  If Nepal in history paid tribute ever as a vassal state to the Chinese Emperor, than whenever the regime in Beijing was powerful, it would ensure Nepal accepts its orbit of influence. With Maoists taking over Nepal, the designs of the Communists in China have succeeded and pacifists in New Delhi stand compromised on our geo-political interests. 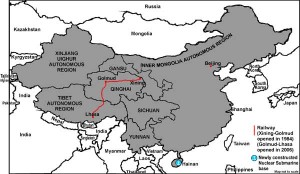 While Indians were bending backwards to force their friendship in the last fifty-eight years, China was busy consolidating its hold on Tibet and other occupied territories. It extended its influence in Asia through economic and military power, unprecedented development of logistic infrastructure and demographic invasion. By 1987 it poured in 75 million Han Chinese into Manchuria, 7 million in Eastern Turkestan (Xinjiang), 8.5 million into Inner Mongolia, and 7.5 million into Tibet. Similarly it bolstered itself against India militarily by building roads up to the borders in Tibet and connecting Sinkiang province by cutting a road through Indian Territory Aksai Chin. Yet we were not alarmed as a nation and continue to swim in the euphoria of five principals of Indo-Chinese friendship termed Panchsheel!’Historically Indian and Chinese influences in Asia have coexisted. However, possibly for the first time in history, India and China were rising almost simultaneously. This produced two contenders for the leadership of Asia. On the chessboard, while Nehru took the initiative to lead Asia- without developing military sinews and powerful international alliances- through The Asian Relations Conference in 1947 and a second Conference on Indonesia in 1949, a year later, Mao’s army executed liberation of Tibet in one masterstroke.

Mao termed Tibet as the palm of a hand with its five fingers as Ladakh, Sikkim, Nepal, Bhutan, and NEFA. He claimed that these were Chinese territories that needed to be ‘liberated’.

Mao, thus demonstrated to the world that China was the actual leader of Asia and India merely a paper tiger, good for holding conferences but incapable of defending a small country in its vicinity. He also understood strategic importance of Tibet, which provided the base in Himalayas, from where a large part of Asia could be engulfed in its sphere of influence.

Despite invasion of Tibet, New Delhi did not understand the significance of the Chinese communists growing up as a military organization, unlike other communist movements. Their core competency lay in the PLA and military virtues were promoted throughout the cadres. If China today dares to claim Arunachal and piece of Sikkim, it is primarily based on its military prowess. On the other hand, the fine Indian military machine built by the British continues to be degraded and demoralized by the Indian civil leadership- its like axing the branch one sits on.

Traditionally Chinese leadership leans on teachings of Master Sun Tzu. Mao in particular was highly influenced by Sun Tzu, who said, ” …To fight and conquer in all your battles is not supreme excellence; supreme excellence consists in breaking the enemy’s resistance without fighting.”

Therefore, a willing proxy was found in Pakistan. For the first time in history, nuclear weapons and missile technology were transferred to countervail and further boost its hatred against India. Of course, we all know how preoccupied Pakistan has kept our national security managers and resources, while Chinese developed a free run in Asia.

China, over a period of time, has cleverly managed to deploy two authoritarian streams of threats against India to break its will and the territorial integrity. Foremost is the Communist threat that originates from Beijing and the second is the Islamic fundamentalist threat from its proxies.

Similarly Maoists in Nepal supported clandestinely by the Chinese are in cahoots with the Indian Maoists who now control 40 percent of India’s territory. If you think that’s not smart enough for warriors of Sun Tzu, than take a look at the borders from North to East -Nepal, Pakistan, Bangladesh, Myanmar are under the spell of Beijing, shrinking India’s influence in its own vicinity without recourse to war. Its matter of time before Chinese upstage Bhutan and Sri Lanka may go the Chinese way due to our inaptitude.

China, over a period of time, has cleverly managed to deploy two authoritarian streams of threats against India to break its will and the territorial integrity. Foremost is the Communist threat that originates from Beijing and the second is the Islamic fundamentalist threat from its proxies. Besides these two, there are other threats like Nepal Maoists or getting the Indo-US Nuclear deal blocked by their comrades in India.

Today for China to threaten Arunachal Pradesh and demand a slice of Sikkim after assured of its vice-like grip on India is a natural progression, even as New Delhi continues its slumber.

In 1999 the Dalai Lama in hindsight admitted, ”When Tibet was free, we took our freedom for granted…In former times Tibetans were a war-like nation whose influence spread far and wide. With the advent of Buddhism our military prowess declined…” The Dalai Lama could easily have said the same for India.

Pacifist philosophies may be good for the individual’s soul but are suicidal for nation’s security.

One thought on “Threat from China”