“This Much and No More” Message for Disruptive Forces in Kashmir 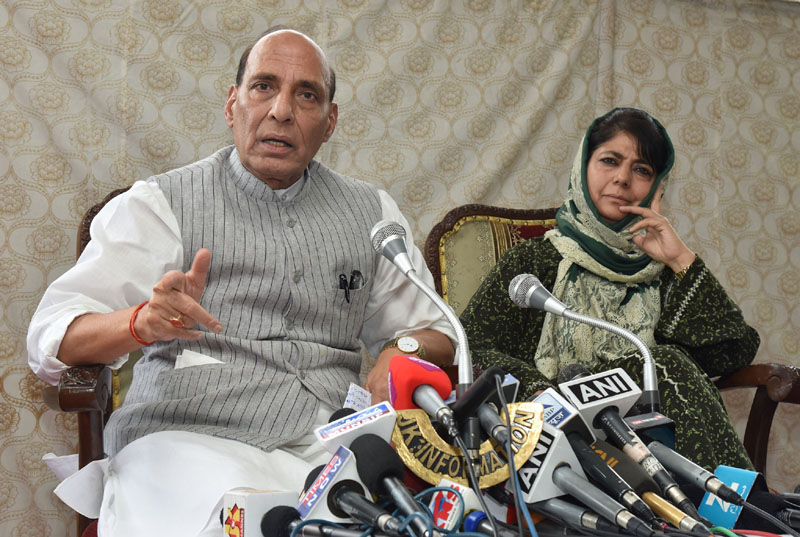 The Union Home Minister Rajnath Singh and the Chief Minister of Jammu and Kashmir Mehbooba Mufti addressing a press conference, in Srinagar on August 25, 2016.

In the early hours of June, 4, 1989, the Peoples Liberation Army (PLA) of China moved into the iconic Tiananmen Square at Beijing to quell a “Movement for Democracy.” The demonstrators there were mostly students – young boys and girls. In no time thousands of the protestors lay dead due to firing by the troops with assault rifles. Even tanks were pressed in service to quell the movement.

In Kashmir, the recent round of protests spearheaded by boys  even younger than the Chinese students in Tiananmen Square, have led to the unfortunate death of only 50 persons including civilians and security force personnel this is a clear indication of the restraint that is being exercised in dealing with the situation.

The unnatural death of even one Indian citizen or any human being across the world is a matter of great sorrow.

This comparison is being made to drive home the point that no government in the world, whether it is a democracy, dictatorship, authoritarian, monarchy or even an anarchy like Pakistan, would ever show as much patience and resilience as has been shown by the Government of India and the Government of Jammu and Kashmir in Kashmir, in the face of grave and sustained provocation by unruly mobs who are holding the region to ransom for no reason whatsoever.

There is also no uniformed force in the world which would take as much beating, injury, risk and above all humiliation as is being heaped by wild, cynical and sadistic boys in Kashmir on the security forces operating there.

In no country of the world the media would sensationalise a serious national situation as is prevalent in Kashmir in the manner that the Indian media is doing. In fact, it is because of constant media attention that the foreign forces financing and controlling the unrest are continuing to keep the matter alive.

A press conference was held jointly by Home Minister Rajnath Singh and Chief Minister Mehbooba Mufti at Srinagar on August, 25. Both leaders in an exemplary exhibition of courage openly place their positions in front of the media and the world.

Mehbooba Mufti stated that the unrest was being caused by only five percent of the people of the valley and the 95 percent majority was suffering immensely as a consequence.

Home Misniter Rajnath Singh addressed all apprehensions and questions that had been raised about the ongoing turmoil over the last few weeks.  He dispelled all notions of the central government not being sensitive to the situation in Kashmir; he opened doors for talks with anybody and everybody within the framework of “Insaniyat, Jhamooriyat and Kashmiriyat.”  He gave a solemn assurance that the use of pellet guns is under review and a decision would be taken in a few days time.

Despite such a mature, reconciliatory approach the two leaders were accosted with a brash, sensationalist, irrelevant and uncoordinated barrage by the media in the question answer session. All reporters were speaking together, excitedly and incoherently. The questions were designed to heckle the leaders and provoke them into saying something which would give more some more “Masala” (sensationalist material) for exploitation.

Undoubtedly, many sitting in the press conference were stooges of the very foreign forces that are responsible for the trouble in the Kashmir valley and had come with directions to disrupt the press meet or take back abrasive bytes that would keep their unholy media campaign alive.

Whatever the government may say or do, it meets with only with cynicism, skepticism and criticism from some sections of the media and political spectrum that is gaining advantage from the turmoil.

Prime Minister Narendra Modi chose to maintain a dignified silence while motivating the Government of Jammu and Kashmir from behind the scenes. A huge hue and cry was created about his “insensitivity” to what was happening in Kashmir; when he did speak a deluge of media and politicians tore his very correct statement to shreds. It was then that the sagacity behind his initial decision to remain quiet became apparent to all right thinking people.

Senior army officers, in a most well meaning manner, gave an appeal for holding of dialogue by all stake holders. Lt. Gen. DS Hooda, Commander of the Northern Command said, “My appeal is for calm. We have to sit down, put our heads together and see if we can find a way out of this situation. So everybody, who is in anyway involved in J&K, needs to introspect and see what we can do to stop it. It is not person or one organisation which can do it (alone).”

Similar sentiments were echoed by General Dalbir Singh, Chief of Army Staff, during his visit to the Kashmir valley a few days later.

The Hurriyat was quick to politicise these well meaning statements. Mirwaiz Umar Farooq responded almost simultaneously by saying that the statement made by the two senior army officers clearly denoted that the Indian army is in control of the Kashmir Valley and that the centre calls the narrative in Kashmir.

This is absolutely ludicrous. Despite all the mayhem and the losses being suffered by the police and paramilitary forces the government has not called out the Indian army even for a flag march in the last fifty days. The army has been only in counter infiltration mode along the Line of Control (LOC).

The enemies of the nation are resorting to baseless propaganda to discredit the forces and keep the pot boiling in Kashmir and the young boys pelting stones are falling prey to this misinformation.

It is very clear to the country and the world that the leadership in the centre and the state has left no stone unturned in trying to convince the stone pelters to eschew violence. The political initiative to control the situation, however, can be stretched only to a point. National interest does not allow further movement in this direction.

In case the propaganda does not stop and the stone pelting does not end, the government would be well advised to escalate the response in the security as well as the political domai. There may be more loss of life and limb but national interest is paramount and those playing in the hands of foreign forces will have to pay the price.  India would, of course, hesitate to go the Chinese way of suppression but what needs to be done needs to be done.