Third Naval Base at Karwar

During the 1970s, the conceptual requirement for a ‘Third Naval Base’ on the West Coast, in addition to Bombay and Cochin, crystallised. The requirements were:

The Choice of Karwar

The initial projection was to acquire 20,400 acres of land, with an additional 5,000 acres for future development. The bulk was forest land followed by private and revenue land.

Karwar was located 80 kms south of Goa and 320 kms north of Mangalore. Its location gave it the benefit of being free from cyclonic devastation. Many small islands, including Anjadip, offered protection against natural elements from the north, west and southwest. It had deep waters. The four-fathom line (24 feet) ran extremely close to the shore all along the coast. The range of tide was 2.5 metres (7 feet) during spring tides and 1.2 metres (4.5 feet) during neap tides.

Two perennial rivers, the Kalinadi River to the north of Karwar Head and the Gangavalli River to the south, would provide potable water, uninterrupted water supply and had hydel potential. The Kalinadi Hydel Power Project was expected to generate a total of 1316 MW of power in its three phases.

The Karnataka State Government was developing Karwar commercial port in three stages to create an all weather port to handle ships up to 60,000 ton DWT for ore and other general cargo traffic.

National Highway 17 was being widened and strengthened to take 20-ton cargo trucks. The West Coast north-south Konkan Railway was to pass through Karwar. The Third Naval Base was included in the 1980–85 Defence Plan.

The initial projection was to acquire 20,400 acres of land, with an additional 5,000 acres for future development. The bulk was forest land followed by private and revenue land. The Karnataka Government agreed to give the forest and revenue land free of cost but stipulated that private land owners should be fully compensated, including bearing the cost of constructing rehabilitation centres with all essential amenities for villagers dwelling in the areas. 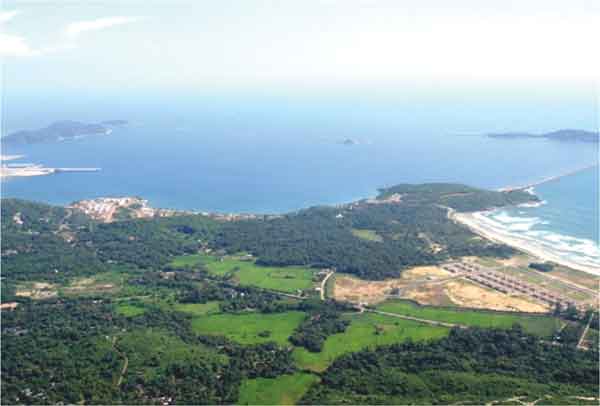 By 1983, the total land requirement was brought down by a re-survey, eliminating inaccuracies in mapping and omitting the forest areas that had earlier been included for security considerations. During the initial period, land acquisition was restricted to 12,354 acres, of which 8,220 acres were to be acquired immediately and the balance later.

Of these 8,220 acres, 5,765 acres were forest land, 2,445 acres were private land and the balance revenue land. The 13 villages located in the private land had to be rehabilitated before the land was acquired.

In 1985, sanction was accorded for Phase I of the project. Due to the enormity of the project and the fact that no Indian firm had undertaken planning and construction of such a major naval base, the Government approved inviting global tenders for consultancy. It was decided also to select a suitable Indian firm to be associated with this work.

The commissioning of Karwar’s naval base, INS Kadamba, on 31 May 2005 marked a milestone achievement in the completion of Phase I.

On 24 October 1986, Prime Minister Rajiv Gandhi, laid the foundation stone for the Third Naval Base and christened it as ‘Project Seabird’.

The first step was to select a suitable Indian consultant to prepare the broad requirements for inviting global tenders and draw up the Detailed Project Definition.

The base has a sea front of 26 kms and a total area of 11,200 acres. With its capability for lifting vessels of 10,000 tons displacement, the Ship Lift and Transfer System can lift all the ships and submarines of the Navy except for aircraft carriers and tankers.

A Committee of Secretaries was constituted to select an Indian firm as consultant. From amongst the various firms that were pre-qualified, the Committee recommended Engineers India Ltd as the prime consultant for the Project. This was approved by the Government.

Along with Engineers India Ltd, a global tender was floated for inviting consultants for planning and designing Phase I of the base. A total of forty-two firms and consortiums responded from all over the world, of which five were short-listed. In consultation with Engineers India Ltd, M/s Regional Engineering Development Consultants of Australia (Redecon) and M/s Netherlands Engineering Consultants of Netherlands (Nedeco) were selected as the foreign consultants.

Prior to finalising the Master Plan and the Detailed Project Report, all the necessary geo-technical investigations, marine environment investigations, model testing of breakwaters, etc were carried out. The Central Water and Power Research Station Pune conducted the wave and motion studies of the harbour and its configuration; these helped to evolve the design and configuration of the breakwaters to obtain optimal tranquility conditions inside the harbour. The studies for model testing included investigations of prevailing wave, tide and wind conditions, sediment flow, soil testing, etc. 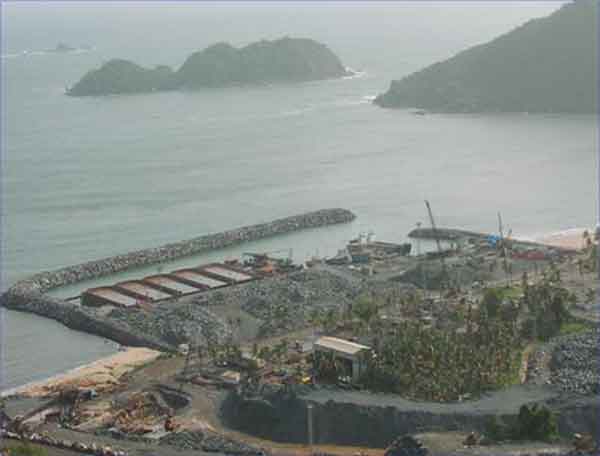 Due to the 1991 financial crisis and the shortage of resources the project could not progress further between 1990 and 1994. This pause was utilised to prune down Phase I of the project. In 1995, Government approved the Revised Phase I.

Selection of the Construction Consortium

Since the expertise for constructing breakwaters was not available within the country, global tenders were invited for constructing the marine works, which comprised both dredging and construction of breakwaters. The remaining facilities were to be constructed by a suitable Indian agency, with the exception of the ship lift. The latter was to be undertaken by a foreign firm, as the technology for its construction was not available within the country.

Approval was accorded for the engagement of M/s Redecon and Nedeco as the consultants/engineers for supervising the construction of marine works.

Redecon and Nedeco prepared tender documents for the execution of the marine works. The consortium of Hochtief of Germany, Ballast Nadam of Netherlands and the Larsen & Toubro of India was selected on the basis of lowest tender.

The Project Management Board approved this tender in April 1998, subject to the condition that the “core area” comprising the three villages of Chendia, Arga and Binaga had been vacated prior to acceptance of tender. The tenders could not be accepted immediately because the Karnataka Government had not been able to vacate the core area.

The rehabilitation of the Project-affected families turned out to be a major task. The Karnataka Government had given the forest and revenue lands free of cost. The Central Government had to provide the funds for the rehabilitation of the villagers, provide compensation for private land and for the creation of suitable “rehabilitation centres”. The vacation of land was to be done by the Karwar District authorities. The initial estimate was vacation of 13 villages with about 2900 families. While sanctioning the project in 1985, a sum of Rs 9 crores had been earmarked for this purpose. Due to the delay in execution of the project, only part of the money was paid as compensation to some project-affected families.

Temporary works started of quarrying and construction of roads. All three villages were finally vacated by September 2000 and works commenced in October 2000 with the commencement of dredging for the breakwaters.

In June 1998, the Karnataka Government was again requested to arrange vacation of the villages in a time bound manner. At this juncture, the Karnataka Government projected an additional requirement of Rs 90 crores. After high-level meetings, the rehabilitation package was revised to Rs. 90 crores in August 1998. This included Rs 2 crores towards a stipend of Rs 1000/- per month per eligible student for pursuing Industrial Technical Institute (ITI) vocational training for a period of two years. It was hoped that ITI training would make these young men employable in the new Dockyard’s workshops.

On commencement of the vacation of the core area, tenders for marine works were accepted; contracts were signed in October 1999. Temporary works started of quarrying and construction of roads. All three villages were finally vacated by September 2000 and works commenced in October 2000 with the commencement of dredging for the breakwaters. 49 hectares of land were reclaimed and 5.14 kms of breakwaters were constructed.

Completion of Phase I

The commissioning of Karwar’s naval base, INS Kadamba, on 31 May 2005 marked a milestone achievement in the completion of Phase I. The shiplift’s commissioning and construction of civilian dwelling units got delayed due to reasons beyond control. These would be ready by 2006 and 2008 respectively. The first naval ship entered harbour on 14 November 2004 and berthed alongside the 420 metre jetty on Navy Day, 04 December 2005.

The base has a sea front of 26 kms and a total area of 11,200 acres. With its capability for lifting vessels of 10,000 tons displacement, the Ship Lift and Transfer System can lift all the ships and submarines of the Navy except for aircraft carriers and tankers.

Relocation of Men, Material and Ships from Bombay to Karwar

Since it would take time to establish special to type maintenance and repair facilities, the present intention is to base only non-fleet ships like OPVs, minesweepers and survey ships at Karwar. The workshops would be ‘generic’ rather than ‘specific for classes of ship’. As facilities develop, Karwar would start being used by other classes of ships.

3 thoughts on “Third Naval Base at Karwar”