Home  >  Spotlights  > Defence Industry  >  The unmanned future is at risk 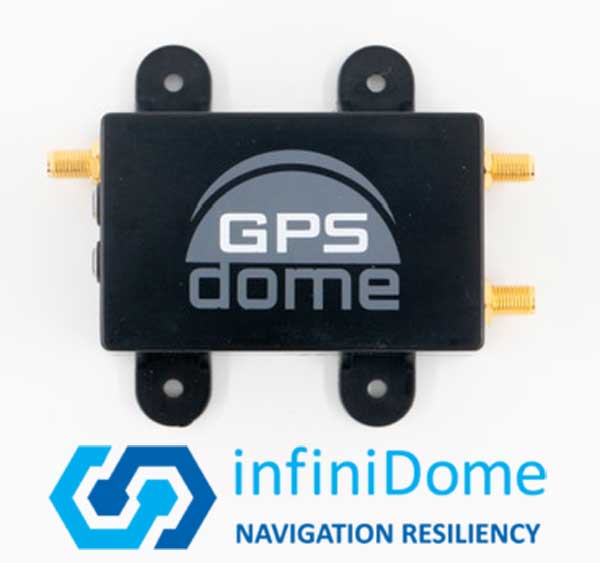 Drones once roamed free, relying on GPS signals that were rarely interfered with. But with the availability of very cheap GPS signal jammers, which can bring down a drone with the flick of a button, this has rapidly changed. Of course, stronger motivations are usually present. For instance, along borders between not-so-friendly countries, signals are sometimes transmitted to send border surveillance drones astray. This affects not only those surveillance drones, but anyone dependent on GPS signals in the area: such as civilian drones, agricultural drones, tractors, and any other platforms using GPS, including passenger planes.

The threat of jamming is not going to subside anytime soon. In fact, we are seeing an increase in jamming events globally. Along the U.S.-Mexico border, drug cartels are using jammers on U.S. border surveillance drones to hide their operations from the U.S. government. Along the Shanghai port in China, pirates may be the cause of ship and plane navigation confusion through the use of jammers. We can see aggressive and well-documented jamming in the Ukraine due to the current situation, with attacks from Russian forces taking down any plane, drone and even critical infrastructure asset in proximity. These are just a few examples to illustrate how important it is to add layers of resiliency to position, navigation and timing systems so as to bring safety to both civilians and military operations.

infiniDome’s GPSdome has proven its ability to protect against jamming under a real-life jamming scenario. The Israel-Syria border has been experiencing frequent jamming from Russian forces positioned in Syria. The jamming is impacting critical border surveillance operations in the Golan Heights, so infiniDome conducted their testing there. GPSdome was able to protect a U-Blox M8N GNSS receiver, widely used by drones and vehicles, from the real-life Russian jamming emitted from Syria. By performing multiple tests and measurements along the Israel-Syria border, infiniDome has shown that the receiver protected by our GPSdome anti-jamming module was able to continuously receive GPS signals during a jamming attack, allowing for uninterrupted navigation. In contrast, an identical GNSS receiver without the GPSdome was completely jammed, stopping the output of navigation data (NMEA) under the same conditions.

Moscow has had a large and growing military presence in Syria since 2015, when it became involved in the country’s civil war. Its presence has introduced complexity to Israel’s drone patrol missions and other military and commercial operations along Syria’s border due to Russian GPS jamming. In 2019, Israel publicly condemned Russian jamming attacks from Syria, which were also affecting commercial air traffic at the country’s main airport in the center of the country. This jamming activity has resumed in 2022.

To understand the problem of jamming, it’s important to delve into the vulnerabilities of GNSS receivers, used by drones and other platforms to perform the critical task of navigation. GNSS receivers use GPS signals (as well as GLONASS, Galileo and other constellations – hence the name “GNSS” – Global Navigation Satellite System) transmitted from satellites orbiting at 20,000 km above the Earth’s surface. The signals are incredibly weak (~-125dBm) when they reach the GNSS receiver on a drone (or a car, military tank or your phone).

All one must do to interfere with these signals is to overpower them, which can be easily accomplished today with a simple jammer that can be bought online for a few dollars. Recently, infiniDome conducted testing and measurements in the Golan Heights along the Israel-Syria border. The goal for the tests was to “hunt down” jamming events, record them, see how they affect an unprotected receiver, and then compare this to how they affect a protected receiver with GPSdome by testing two identical U-Blox M8N receivers side by side.

The GPSdome anti-jammer is a retrofit module which can be easily integrated to protect any GNSS-based system. It combines patterns from two omni-directional antennas to create a null in the direction of the jamming signal, thus attenuating its power, making any GPS receiver about 50 times more resilient to jamming. In a video of the tests, a GNSS receiver protected by GPSdome can be seen maintaining the GPS signal along the border, enabling uninterrupted navigation. In contrast, the unprotected GNSS receiver loses the GPS signal during the attack, which can easily result in the drone becoming completely jammed, aggressively drifting and eventually crashing. 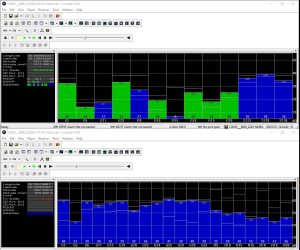 (Click to enlarge) Two screenshots of recordings during the event: The first (top) is of the GNSS receiver (U-Blox M8N) protected with the GPSdome, ensuring continuous navigation. The second (bottom) is unprotected and shows how the M8N was completely blocked for the entire route.

The jamming attack was analyzed and appears not to have been a “brute force” attack, but rather a slightly more sophisticated signal, causing the receivers to “see” satellites but not be able to sync their signals and track them. The receiver protected by the GPSdome (shown below) was able to distinguish between the real GNSS signals and the jamming signals.

In addition, GPSdome was able to attenuate the jamming signals sufficiently to be able to continue tracking the real GNSS signals while at the same time reporting the attack via its dedicated alert output. 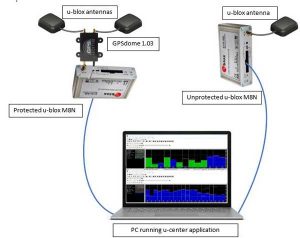 GPSdome is the first ever dual-use GPS protection solution to meet even the most stringent SWaP requirements (Size, Weight and Power) of class-1 drones with a miniature size (74 x 47 x 25mm), low weight (150g), and efficient power consumption (max power consumption: <0.8W). As GPSdome is both lightweight and easy to integrate (see integration diagram below), it can effectively provide much-needed resilience to drones and UAVs from widely-available jammers, enabling drone operators to carry out missions safely and reliably.