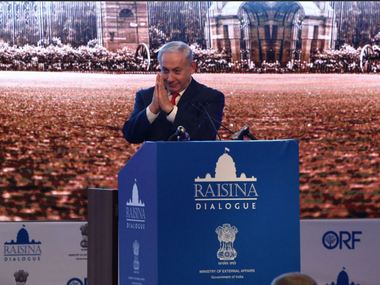 The much awaited third annual Raisina Dialogue at New Delhi has finally concluded. The core theme of this elite foreign policy conference this year was “Managing Disruptive Transitions: Ideas, Institutions and Idioms”. Over two and half days of discussions, deliberations and interactions between scholars of repute from 16-18 January, addressed many pressing and challenging issues existent in the field of international relations.

The high point of the conference was the inaugural speech made by Israeli PM Benjamin Netanyahu who was on 6 day visit to India. This was the first time in the history of Raisina Dialogue when a head of a state was addressing the audience. Netanyahu’s speech covered the issue of ‘hard’ and ‘soft’ power and how Israel, despite being a resource scarce country managed to reach a position globally where it is counted as a power to reckon with. Israeli PM made his likings clear, that he liked ‘hard power’.

His speech on the set the stage for the next two days in which the focus remained on issues like terrorism, the emergence of Indo-Pacific in the place of Asia-Pacific, the rising threat of China in South Asia and the Indian Ocean Region etc. But the big statement was made by the Indian army chief Gen Bipin Rawat that the media shouldn’t give spaces to the activities of terrorists, extremists and separatists as it results boosting their intentions and actions. He defined terrorists as “anybody who uses violence to as a means to an end and causes disruption to the civilian life and property, within their own nation or outside the boundaries of their own nation, should ideally be called a terrorist”.

One noteworthy thing about this year’s Raisina Dialogue is that about one-third of the panelists this year were women. This fact was highlighted proudly by India’s external affairs minister, Sushma Swaraj during her speech. The Dialogue in the last three years has taken an institutional shape as it has provided a good platform for people interested and working in the field of international relations and security to come together and interact amongst themselves.

Being a multilateral conference, the Raisina Dialogue brings together global leaders in policy, business, media, civil society, defence and most importantly foreign policy. Apart from being a good platform for the professions working in the field of foreign policy, the Raisina Dialogue provides a good opportunity to the budding foreign policy experts and young students as they get a chance to interact and raise pertinent questions on various issues. This year too, most of the questions were raised by Raisina young fellows who came from countries from all over the world.

The big focus of the dialogue remained on the use of the term ‘Indo-Pacific region’. To discuss the challenges and opportunities in the region, a whole panel was dedicated on the topic “Unchartered Waters: In Search for Order in the Indo-Pacific”, where the navy chiefs of all four ‘Quad’ countries i.e. US, India, Japan and Australia came on a platform together to discuss the challenges of new emerging global order where Indian-Ocean Region will increasingly become the most prominent area not in the field of maritime security and global trade but in general, the global order.

The issue of China neglecting the international laws in South and East China was discussed and it was referred as a ‘disruptive force’ in the international system.Another significant figure participating in the dialogue was Dr. David Malone from United Nations University who is also the writer of the famous book on Indian Foreign Policy, Does the Elephant Dance? Talking about the changing global order, he said, “Chaos breeds reactions and these reactions in turn breed new realities”.

This Raisina Dialogue saw India’s Foreign Secretary Dr S. Jayashankar participating very candidly and answering the questions in a very straightforward manner. On a rather uneasy question from a Raisina fellow about why there was no mention from anyone regarding India’s state sponsored terrorism in Balochistan, the foreign secretary refuted it strongly by saying that he talks about ‘facts’ and not ‘fiction’.

A lot of discussion in the dialogue was about India’s growing power, its close proximity with US and whether it can emerge as a counter-balance to China in coming years. The 21st century was referred by many panelists as an ‘Asian Century’. Apart from this the issue of ‘Rohingya Refugee Crisis’ was discussed by the Bangladeshi Foreign Minister Abul Hassan Mahmood Ali. The Minister informed the audience about the strained relations between Bangladesh and Myanmar which arose due to Rohingya Refugee Crisis.

The only big surprise of the Dialogue was that the Indian Prime Minister didn’t speak in the Raisina Dialogue. Being the prime minister, his speech would have added ‘weight’ to this year’s dialogue at large as many international relations observers were awaiting to hear him out.

Overall, the Raisina Dialoue was a grand success in terms of the quality of discussions, questions raised, issues addressed and scholarly interactions. The Dialogue also brought forward representatives from various think-tanks across New Delhi and one could observe a considerable growth in the number of foreign policy think tanks in New Delhi.

To conclude, this year’s Raisina Dialogue has raised the expectation of the participants from this annual event as people expect it to grow year after year with a proactive support from Ministry of External Affairs which has been hosting the Dialogue since its inception.