The pitfalls in evolution of Indian Army-I 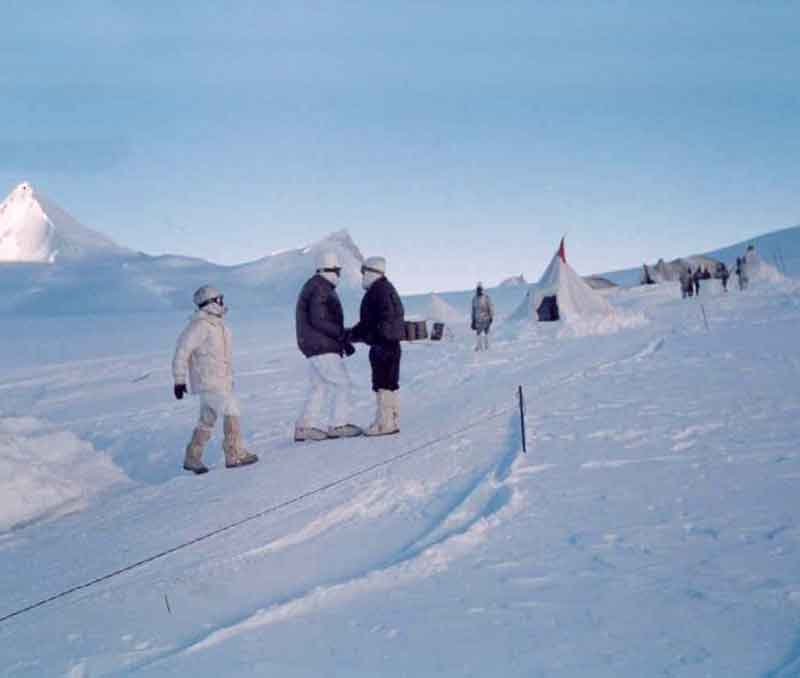 The foundation of the Indian Army was laid by the British by combining in 1748 the “watch and ward” elements the East India Company employed to protect its trading centres. Initially, these elements were organized into battalions, but as trading interests acquired political overtones they grew into commands in the form of presidency units called the Bombay, Madras and Bengal armies.

These armies comprised British and Indian elements, and the role of the Indian battalions was in the beginning to support the British units in spheres of local administration. But as Britain’s expansionist policies needed more and more armed manpower, hard to obtain in the mother country, they reconciled themselves to giving fighting shape to the Indian armies by raising infantry, cavalry and artillery units according to imperial standards.

Between 1799 and 1857, the Indian Army thus organised was fully exploited to further British colonial interests, first by fighting other European powers like the French and the Portuguese with a foothold in the country, and later to crush Indian resistance. Applying the statecraft of divide and rule, the British defeated Tippu Sultan, captured the Karnatak, overran the Maratha Empire, and finally subdued Punjab, the stronghold of the Sikhs and the last region of India to go under. 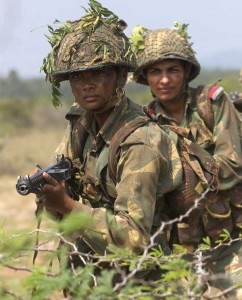 Throughout this process, Indian was pitted against Indian to further British ambitions. The Indian units of the company’s forces were primarily officered by Britons, and there was a strict policy of segregation between British and native units. Indian personnel were generally treated as an inferior component. It is therefore shameful that some units of the Indian Army even today proudly display battle honours of that time, even though the winning of these battles perpetuated British rule in India and reduced Indians to a century and a half of slaver.The glaring disparities and inequality of treatment, and perhaps an inborn revulsion and self-hatred for fighting against their own people, sparked isolated incidents of revolt, of which what is commonly known as the Great Indian Mutiny of 1857 was the most significant. The British got the message all right as they promptly set about reorganizing their armies in India. The measures adopted included denying artillery to Indians and greater surveillance and checks of other arms.

At the end of the Afghan War of 1878 the British had reached the limits of their territorial conquests and the time had come to consolidate their gains. Military strongholds were accordingly established in the form of cantonments throughout the country to keep an eye on the populace. Some of the earlier ones were at Pune, Kanpur, Jabalpur, Jhansi, Bangalore and Ambala. The three presidency armies were amalgamated to create a homogeneous Indian Army in 1902. Reorganisation of this army to make it a front-rank fighting force on par with European armies was carried out between the years 1903 to 1914 under the direction of Lord Kitchener. The main purpose was to use Indian manpower to safeguard the ever-expanding British interests in the Middle and Far East.

Between 1799 and 1857, the Indian Army thus organised was fully exploited to further British colonial interests, first by fighting other European powers like the French and the Portuguese with a foothold in the country, and later to crush Indian resistance.

In 1914, at the start of World War I, the Indian Army had a strength of 155,000. But as casualties mounted because of the heavy attrition rate of trench warfare more and more volunteer manpower from India was inducted to face German guns in France and elsewhere. At the end of the war the strength of the Indian Army had swelled to 573,000. Casualties suffered were very heavy but remained unpublicized, with a purpose. On the credit side, Indian troops won laurels for their valour in battle by securing 21 Victoria Crosses, the highest British award for bravery in combat. They also gained experience through fighting in every theatre of the war, and better still of fighting side by side with the leading European armies of the time. The Indian soldier won acclaim for his hardihood, ability to subsist on very little, night vision and steadfastness in battle.

The successful conclusion of the 1914-18 war in favour of the Allies and the fall of the Ottoman Empire in the Middle East increased British commitments in that region and in the Far East. Exploiting the quality and abundance of manpower available in India, the British strove to shape the Indian Army into an effective instrument of power, but the worldwide economic depression of the 1930s did not allow much scope for improvement. Weaponry and tactical concepts were submerged by British conservatism and thrift.

Clamour for Indianisation of the armed forces was raised in public forums by politically conscious Indians in the late 1920s. Bowing to public demand, a beginning was made by opening the Indian Military Academy at Dehra Dun to train young Indians for the officer cadre. The Indian Artillery came into being in 1935. The process of Indianisation was hastened by the outbreak of the Second World War. Exploiting India’s vast reservoir of manpower, the British raised an army of considerable strength.

Indian personnel were generally treated as an inferior component.

As the war progressed, the Indian Army came to be ranked as the finest fighting machine of the Allies and won honours both in the western and eastern theatres of war. In the six years from 1939 to 1945, it fought in Burma, the Dutch East Indies, Eritrea, Greece, Hong Kong, Iraq, Italy, Malaya, North Africa, Singapore, Somaliland, Syria. It should be remembered that although Indian troops participated in the two world conflagrations and earlier colonial wars only under the British flag and British leadership the credit for their performance in them should rightfully be theirs.

At the end of the Second World War the Indian Army had a fighting strength of half a million, which was under order of demobilisation for want of a clearer evaluation in Whitehall of the British postwar requirements in Asia. Then came independence, leading to the division of the existing army on a two is to one basis. India’s share came to some 280,000 personnel of all categories, including the Gorkha Rifles under a treaty concluded between India and Nepal in November 1947. The holocaust of partition in Punjab and widespread communal disturbances forbade consideration of long-term planning for the armed forces. This was soon followed by the invasion of Kashmir in October 1947, and India’s decision to come to Maharaja Hari Singh’s aid fully involved the Indian Army, fighting for the first time under Indian leadership, until the ceasefire on 31 December 1948.

Mahatma Gandhi, reflecting the feelings of many of his followers, advocated disbanding the army, an instrument of violence, in one of his prayer meetings. But the military operations in Kashmir, the takeover of the princely states of Hyderabad and Junagadh and the subsequent counterinsurgency operations in the communist stronghold of Telengana brought home the need to maintain the existing strength of the army till the return of normalcy.

The three presidency armies were amalgamated to create a homogeneous Indian Army in 1902.

To meet the temporary requirement of additional manpower, a large number of recently disbanded personnel were recalled and some contingents of state forces were absorbed on loan. A Territorial Army Act was enacted in 1948 to augment armed manpower in times of emergency. This act was blindly modelled on the British pattern without assessment of actual needs in the changed political context of independence. A National Cadet Corps (NCC) to train officer material was also instituted as a successor to the University Officers Training Corps (UOTC).

The return to normalcy after the ceasefire in Kashmir in early 1949 induced the Government to consider the question of size and composition of the peacetime army. This consideration was constantly hampered by politicians who had suffered sometimes at the hands of the army in the freedom struggle, and consequently still harboured resentment against it, and by the civil servants, who to display their supremacy over the defence services suddenly blossomed into armchair strategists with vague conceptions of the problems at hand, and above all by the army hierarchy, which displayed utter bankruptcy of thought and vision required to cope with such problems of far-reaching consequence.

As a result, the politician opted for the development of “the visible instruments of power” in the Indian Air Force and the Indian Navy, which took away most of the funds available for defence at the cost of the army. The then Defence Secretary, HM Patel, stated after visiting Canada as the head of an Indian military mission that he was “highly impressed” by the Canadian military system and advocated “a highly mechanized and mobile force” of some 150,000 men capable of rapid expansion in a crisis. This force could be backed by a large reserve of Territorial Army and paramilitary forces. Obviously, Mr Patel did not understand the geopolitical needs of the new India, and fortunately for the army fastmoving events proved him wrong.

On the credit side, Indian troops won laurels for their valour in battle by securing 21 Victoria Crosses, the highest British award for bravery in combat.

The emergence of Communist China in 1950 and its declared intention to re-establish Peking’s hegemony over Tibet, the Korean War and the consequent massive intervention by China, and the Communist insurrections in India and Southeast Asia engendered a different outlook in Indian thinking. Relations with Pakistan continued to deteriorate in this period, leading to communal riots in West Bengal and in East Pakistan, accompanied by inflammatory speeches by both sides.

In one speech, Prime Minister Liaqat Ali Khan of Pakistan brandished a clenched fist and threatened war with India. This brought the armed forces of the two countries to the international border both in the east and the west. A crisis was eventually averted, but it led President Rajendra Prasad, a confirmed Gandhian, to announce in Parliament that the government could not risk “putting the country in jeopardy at a time when evil forces were endangering its security, both within and outside.”