Home  >  Spotlights  > Geopolitics  >  The Maritime Dimension of the India-Pakistan Conflict 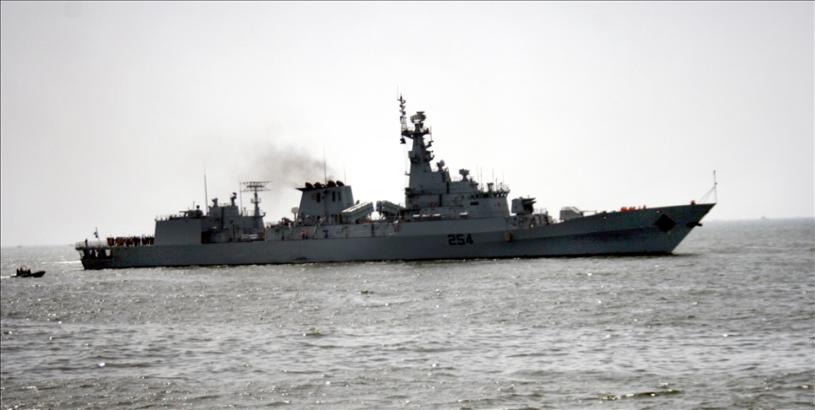 In a bid to counter India, China recently delivered its most advanced warship to Pakistan. It is designed and built by China State Shipbuilding Corp Ltd (CSSC). It was commissioned in the Pakistan Navy at a ceremony held at Shanghai. The Type 054A/P frigate is named PNS Tughril. Pakistan’s Ambassador to China said that the commissioning of PNS Tughril ensures a balance of power in the Indian Ocean.

This frigate is the largest warship China has ever exported. PNS Tughril is one of the four warships of Type 054 that China is currently building for Pakistan.

Since the warship is commissioned in the Pakistan Navy, it is pertinent to consider the maritime dimension of the India-Pakistan conflict. Also, this dimension remains a lesser focused area since continental challenges have dominated India-Pakistan relations. The role of the maritime domain must be considered from traditional security threats, non-traditional security threats and geopolitics of the Indian Ocean Region.

The commissioning of China’s most advanced warship into the Pakistan Navy has drawn comparisons with India. While the Type 054A/P frigate would enhance Pakistan’s naval strength, it still cannot match India. In a conventional war, India would prevail over Pakistan. It is evident from the comparison of the naval strength of both the countries from the following table.

Besides, another lesser highlighted area in India-Pakistan conflicts is the role of the Indian Navy in wars against Pakistan. The Navy, along with the Army and the Air Force, had played an important role in ensuring India’s victories against Pakistan in 1971 and 1999.

During the 1971 war, the Indian Navy carried out Operation Trident and Operation Python to attack Karachi harbour. On December 4, while carrying out Operation Trident, three missile boats of the Indian Navy – Nirghat, Veer and Nipat – attacked and sank Pakistan Navy’s Destroyer Khaiber, Minesweeper Muhafiz and MV Venus Challenger. These boats also destroyed Kiamari oil fields. On December 8, Operation Python was carried out in which a missile boat – Vinash – supported by INS Trishul and INS Talwar attacked Karachi. In this attack, PNS Dacca was destroyed and Keamari oil fields were damaged.

During the Kargil War of 1999, the Indian Navy launched Operation Talwar and blockaded Karachi, thereby pressurizing Pakistan into not expanding the war theatre beyond Kargil. This blockade resulted in Pakistan shifting its naval assets away from Karachi fearing damage and destruction.

Like the Army and Air Force, the Indian Navy has been a key factor in India’s military superiority over Pakistan in all the conventional wars.

Inability to win conventional wars with India owing to lack of strength, capability and strategy, Pakistan has been following a policy of thousand cuts against India. It implies waging a covert war instead of a direct one. This policy includes support to cross-border terrorism and attacks on India’s armed forces as well as civilians.

This indirect warfare is a part of the non-traditional security threats that India is facing from Pakistan. The maritime domain is also a medium used by Pakistan to carry out its covert strategy.

It was through the sea that the terrorists, who carried out the 26/11 terror attack on Mumbai, landed in India. This attack exposed the gaps in India’s maritime security as the terrorists could not be intercepted. Prior to this, Pakistan had transported explosives to India via sea for carrying out the 1993 attacks in Mumbai. A vulnerable state of maritime security not only puts Indian citizens’ lives at risk but is also a threat to India’s foreign trade for which the sea is the primary transit route.

Pakistan also uses the sea route for drug trafficking. Recently, the Gujarat Anti-Terrorist Squad (ATS) seized 120 kg of heroin worth Rs. 600 crores in Morbi. This consignment was recovered from a Pakistani boat and was sent by Zahid Bashir Baloch, a resident of Pakistan.

Pakistan is one of the major transit points used by drug lords from Afghanistan and Central Asia to transport drugs to South and Southeast Asia, the Middle East and even Europe. With the Taliban taking over Afghanistan, drug trafficking could witness a rise in the region. As a result, narco-terrorism would get a boost. In this regard, India would need to strengthen its vigil on the maritime activities of Pakistan.

By delivering its most advanced warship to Pakistan, China is attempting to ramp up its presence in the Indian Ocean Region. Around 80 percent of China’s imported oil is transported through the Indian Ocean and Malacca Strait. With the Quad gaining momentum, PNS Tughril would be China’s counterbalance to India and the Quad in the western Indian Ocean. This warship would strengthen China’s presence at the Gwadar Port in Pakistan. In addition to the Type 054A/P frigates, Pakistan is acquiring eight Hangor-class submarines from China.

Turkey is also stepping up its naval cooperation with Pakistan. Pakistan signed a contract with Turkey for four MILGEM-class corvettes in 2018. The first of the four corvettes was launched in Istanbul in August this year.

With geopolitical rivalry in the Indian Ocean Region intensifying, countries like China and Turkey are exploiting Pakistan’s troubled relations with India to push forward their own strategic interests. However, given the economic status and limited strategic capability, Pakistan is a mere instrument in the hands of major powers.

Despite the acceleration in defence cooperation, Pakistan’s military strength remains inferior to India’s. Also, India being a more lucrative market, the US, Russia and the European countries are increasing their defence engagements with India. This leads to Islamabad’s growing dependence on Beijing as the principal defence supplier.

Ultimately, Pakistan may be consigned to being just a footnote in the larger context of the geopolitical rivalry between India and China in the Indian Ocean Region. But to neutralize any challenge from Pakistan, India must maintain equal focus on the maritime domain as much as the continental domain to effectively counter the increasing non-traditional security threats.

is a Political Analyst based in Vadodara.