The March to Dacca - I 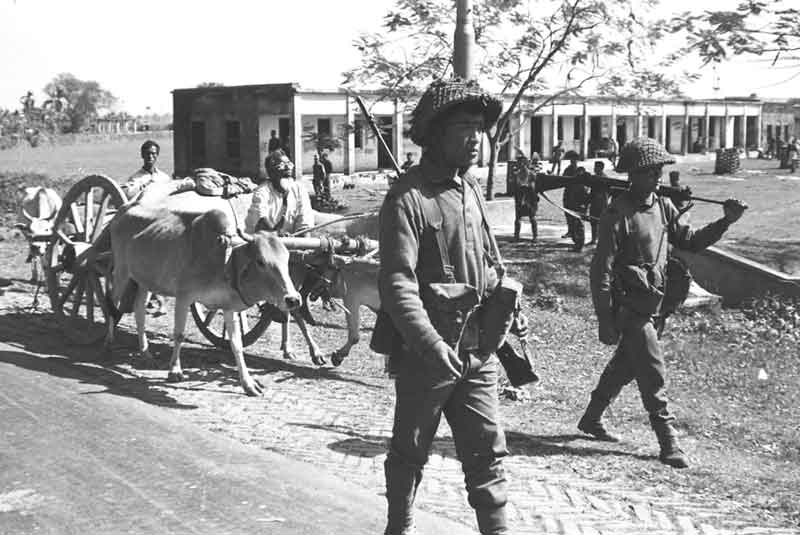 On 9 December, Sagat Singh had secured the waterline of the Meghna in the general area of Ashuganj and was poised for an advance to Dacca. All the approaches to Dacca lay across the Meghna, which was about 4,000 yards wide in this area. A 2,950 feet long bridge crossed it at Ashuganj, but two of its spans had been destroyed by the retiring Pakistanis. Engineer resources of the magnitude required to span the river obstacle were not immediately available, and were not likely to be so early enough to keep up the momentum of the advance. 57 Mountain Division, established on the waterline, was ordered to push across the river by all means locally available and build up sufficient strength on the other bank to be able to move ahead to Dacca.

On the night of 9/10 December, the helicopter force in the theatre, numbering some 14 MI-4s in all, were brought into service, and for the next 36 hours an air bridge was established, flying some 110 sorties. The Ml-4 has a limited load capacity and can carry hardly a section of infantry with full loads at a time. 311 Mountain Brigade Group was the first formation to be lifted. One landed in the Raipura area. It secured Methi Kanda railway station by the evening of 9 December. 19 Punjab crossed the river and worked its way along to dominate the Pakistani pocket still holding out at Bhairab Bazar. 4 Guards advanced simultaneously to Narsingdi and secured it on 11 December.

The buildup across the Meghna was proceeding almost in a vacuum, but its rate was painfully slow. The main reason for the slow progress was lack of transport.

With Narsingdi in Sagat Singh’s hand, the Bhairab-Bazaar-pocket contained and his north flank fully secured, the stage was set to break out towards Dacca, especially when no resistance was encountered anywhere. The buildup across the Meghna was proceeding almost in a vacuum, but its rate was painfully slow. The main reason for the slow progress was lack of transport. The capacity of Ml-4 helicopters and country boats was limited, and the river gap formidably large, and this added to the turnround timings. Even PT-76 amphibian tanks, which could be used to ferry troops and equipment, had to be towed across by country craft as they got overheated after an hour’s operation. The fast current and the Meghna’s width would take anything up to three hours to negotiate. By 11 December, Headquarters 311 Mountain Brigade, with four infantry battalions, one troop of PT-76 tanks, one mountain artillery regiment less one battery, one battery of 120-mm mortars, four medium guns and only two Kraz tractors, had crossed. When the units organised themselves, they were pushed to make contact with the Pakistani opposition. At times, troops were leapfrogged by helicopters along the line of advance to achieve speed.

Broadly, 311 Mountain Brigade advanced along the Narsingdi-Demra axis. Having secured Narsingdi on 11 December, it contacted Demra on 14 December and found it held by about a company strength supported by a couple of tanks. 2 Bangladesh Battalion crossed the Satlakhya river in the north and secured Rupganj the same day. Another battalion also crossed in the general area of Puligaon on the night of 13/14 December. 71 Mountain Brigade Group, advancing along the Narsingdi-Pubail-Tungi axis, secured Pubail on 14 December and contacted the Tungi defences the same evening. At this stage, further advance by 57 Mountain Division was halted on the orders of the Army Commander to avoid a clash with 101 Communication Zone Area troops advancing from the north and reportedly already in contact with the Dacca fortress defences.

Wishing to give hot pursuit to the withdrawing Pakistani garrisons, Nagra decided to use Klers brigade with the new grouping.

As adequate river craft could not be mustered, 301 Mountain Brigade was ordered to concentrate after the capture of Chandpurat Daudkandi for an advance on Narayanganj by helicopter and with whatever river craft could be found there. Brigade headquarters and two battalions without supporting arms and heavier weapons were lifted by helicopter from Daudkandi to Baidya Bazaar on the night of 14/15 December. The remainder of the group moved by river and road. This brigade reached the eastern bank of the Satlakhya only on 15 December, but before they could cross the ceasefire had become effective.

Crossing the Meghna and advancing to the Satlakhya by 57 Mountain Division under Gen Gonsalves was a great feat of logistics and movement achieved with rare ingenuity and enterprise. Heli-lift operations of such magnitude, using an aging fleet of MI-4 helicopters, was tried out for the first time in India although not visualised in the operational plans. Credit for this must go to Sagat, and to Gonsalves, for its bold and enterprising execution.

13 Rajputana Rifles, one of Klers battalions, was to stay back at Jamalpur to look after crossing arrangements and provide a firm base. Siddiqis Freedom Fighters, already operating in the Madhupur forest in the Tangail area, had created havoc along the routes of Pakistani withdrawal.

Because the crossing units lacked basic transport, Gonsalves used anything which moved on wheels, from a cycle rickshaw to a bullock cart, to carry his troops and equipment. Brig Jangi Bawa, his artillery commander, did even better by mounting his guns on railway flats and firing them from these mobile platforms which were propelled by ever-willing local civilian labourers. He later managed to infiltrate some heavy mortars and medium guns across the Satlakhya and the Balu to shell Dacca from the night of 13/14 December onwards.

Despite Gonsalves’ best efforts, he was not able to create a balanced force to tackle prepared defences based on built-up fortifications and manned by spirited troops. He was woefully short of suitable types of tanks and anti-tank weaponry. A couple of Pakistani tanks were noticed in the defences at Demra and this made his troops cautious. Thus the position was not taken till it surrendered on its own after the ceasefire. Artillery support for even a deliberate battalion attack was short, and there was speculation what the outcome might have been if Niazi had the resources to make a stand at Dacca, a natural fortress covered by the formidable river obstacles of the Budhi Ganga in the west and the Satlakhya and Balu in the east. Sagat’s build-up for assaulting Dacca would have taken some days, and by that time Niazi might have received outside political or military help as the Pakistani leaders promised. His mistake lay in not making proper preparations to man the Dacca defences.

The fall of Jamalpur and Mymensingh in the northern sector acted as a spur to the plans for the advance on Dacca. Nagra issued orders for their execution on 11 December. He calculated that his advance was likely to be opposed by a battalion group or set fighting delaying actions at Madhupur, Tangail, Kalaikar and at Jaydebpur based on the Turag river. His advance was to be carried out broadly in three phases with two brigade groups, each brigade leapfrogging alternately. 95 Mountain Brigade Group, now comprising I Maratha Light Infantry, 6 Sikh Light Infantry and 2 Para Battalion after a drop in the general area of Tangail, and all available artillery under Kler, were to capture Tangail in the first phase.

It would have been preferable to use a fresh unit, 167 Infantry Brigade, which had by then become available, but it would have taken the formation much time to cross the Brahmaputra because river craft and ferry arrangements were lacking. Wishing to give hot pursuit to the withdrawing Pakistani garrisons, Nagra decided to use Kler’s brigade with the new grouping. In the next phase Brig Irani, in command of 167 Infantry Brigade Group, was to advance from Tangail and capture Jaydebpur. Finally, depending on the prevailing situation, the entire force under Nagra, including Sant Singh’s group, was to invest Dacca. 13 Rajputana Rifles, one of Kler’s battalions, was to stay back at Jamalpur to look after crossing arrangements and provide a firm base. Siddiqi’s Freedom Fighters, already operating in the Madhupur forest in the Tangail area, had created havoc along the routes of Pakistani withdrawal. They had destroyed some 18 bridges and mined the bypasses. This force was asked to intensify the disruption of the Pakistani withdrawal by laying ambushes on their lines of retreat.

The Siddigi group harassed their movements throughout with an extensive network of ambushes and mines. This forced some Pakistani troops to disperse in the 11 Madhupur forest and the countryside.

2 Para Battalion was paradropped about 1600 hours on 11 December in Tangail withthe aim of capturing the bridge over the Johajang at Poongli and interrupting and destroying the Pakistani troops retreating from Jamalpur and Mymensingh, and in the process facilitating the advance of the main Indian force towards Dacca. The drop and para action of this battalion has been described in great detail elsewhere in this narrative while discussing the airborne Indian forces. Suffice to say that in the context of the advance to Dac-.a 2 Para Battalion achieved its objective of capturing the Poongli bridge and the ferry site by 2000 hours the same day, and ambushed a Pakistani mortar battery convoy about midnight. But it transpired later that the main column of the Mymensingh and Jamalpur garrisons had passed through before the para roadblock became effective.

After the surrender of Jamalpur in the early hours of the morning of 11 December and the discovery that Mymensingh had been evacuated about the same time, it was imperative that the advance should be resumed expeditiously if the garrison withdrawing from Mymensingh was to be trapped. The routes of retreat from Mymensingh joined the main road from Jamalpur at Madhupur and Tangail, a distance of approximately 30 and 50 miles respectively. It may be safely assumed that sufficient motor transport was available to Qadir to enable his garrison at Mymensingh to pass through Tangail before the para battalion’s block became effective. 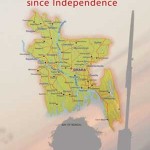 The mortar battery column which was trapped was perhaps a straggler which took too long to get away. Inthe event, Kler’s brigade group did not get going till 0300 hours on 12 December, 21 hours after Qadir’s likely start from Mymensingh, and the para roadblock at Poongli became effective at 2000 hours on 11 December, thus giving a clear 14 hours for the Withdrawing Pakistanis to get away, but not without some interference. The Siddigi group harassed their movements throughout with an extensive network of ambushes and mines. This forced some Pakistani troops to disperse in the 11 Madhupur forest and the countryside. Some of these parties were captured when travelling on foot along the Mymensingh-Dacca railway line and elsewhere. But, on the whole, Qadir was successful in extricating the bulk of his Mymensingh garrison intact.It has already been brought out that Kler’s brigade had moved on manpack basis. After the capture Jamalpur, it had to be replenished. Sufficient transport was recovered and some buses and other civilian vehicles mustered on 11 December. One battery of 66 Mountain Regiment was ferried across, and rations and ammunition were replenished by airdrop. 1 Maratha Light Infantry Group was made ready to resume the advance at 0300 hours on 12 December. This would therefore explain the timelag of 21 hours.If Nagra had planned to trap the withdrawing Pakistanis he should have foreseen such delays and advanced the paradrop accordingly.