Here is an eye witness account of that night by Capt S.K. Tikoo (Retd), who along with his family experienced the orchestrated happenings, first hand.1

“January 19, 1990. Twenty two years have already passed since that dreadful day which turned into a never-ending night, when dawn that ends the darkness of the previous night so very naturally, seemed to be a distant dream. When you think of those agonizing and tormenting hours of that night even today, your heart misses a beat and if you do not come out of that nightmarish experience immediately, there is every possibility of going into convulsions that could lead to a catastrophe. Such is the impact and the imprint of that day on our lives that you have to carry those scary and torturous memories with you till you are alive.

Chilai- Kalan (the most severe period of winter) was at its worst. It had not snowed for quite some time and the sub-zero temperature was sending a chill down our spine. On top of it, there was mounting tension in the air. Selective killings of Kashmiri Pandits had already started and we were still awaiting some miracle to take place that could restore some semblance of normalcy. I, unlike other days, came home early at around 6 P.M. As usual, I parked my car on the main road near the then Kani Kadal Fire-Station,  just across the shop of the milk-maid, famous for her paneer(cheese) and then walked through the nine serpentine kochas (narrow lanes) leading to my home, situated on the eastern  bank of Kuta Kohl, once a roaring tributary of Vitasta. All the houses on our side belonged to Pandits with the sole exception of the house belonging to Munnawar Sheikh, a well respected trader of Kashmir Arts.

It was pitch-dark by the time we reached there; no street lights, no lights even in the residential houses on either side of the road. Atmosphere was very eerie; as if the entire city had been taken over by ghosts.

The same was true on the western bank of Kuta Kohl, though in reverse; everyone on this bank was a Muslim with the sole exception of a house belonging to Moti Lal Bhan, who as a teacher had achieved a celebrity status in his profession.

It will be interesting to recall my personal experiences of the horrible day preceding the deadly night of the 19th January 1990. Mohan Chiragi, an eminent journalist, against heavy odds, had taken it on himself to bring out the Srinagar edition of the leading Urdu national Newspaper Quami awaz, which was already being published from New Delhi, Lucknow and Patna. The paper was an instant success, and its office in the Khidmat House on the bund at Abi Guzar, Srinagar, was a meeting point for all those who still had the courage to talk differently; against the militancy.

The security of the staff of nearly 30 persons, all Kashmiri Muslims, consisting of reporters, correspondents, copyists, katibs, photographers and those on administrative duties, had to be taken care of. Working till late at night, these employees were keen to have me with them, and it suited both Chiragi and me. Though they were all carrying out their duties as dedicated newsmen, yet you could not rule out the possibility of someone leading them astray, if left alone. And why were the staffers keen that I stay with them till they closed down for the day; usually10.30 or 11 pm – a deathly time those days? I was, in fact, their insurance. Tahir Mohi-ud-Din (now editor of very popular Urdu Weekly Chataan published from Srinagar) was the News Editor and he had to be left at his residence in Natipora.

He was scared of crossing the Ram Bagh Bridge, where the security forces would subject anyone at that late hour, to a thorough search, which meant that the person had to stay out in the cold for quite some time, no matter what profession one belonged to.Morfat Qadiri, son of that legendry journalist, Qadiri Saheb, had to be dropped at Narsingh Garh. There were others who had to be dropped en- route at Tanki Pora, Dalhasanyar and Bana Mohalla.

The real ‘fun’ would begin at Tankipora-Zaindar Mohalla, I thought. Incidentally, I discovered that the Jeep we were travelling in was displaying Haz min fazal-i-rabi2 in bold letters on its front bonnet. This legend was not there a few days back. Besides, Quami Awaz written on its wind screen had been very discreetly obliterated. Coming back to Zaindar Mohalla. It was pitch-dark by the time we reached there; no street lights, no lights even in the residential houses on either side of the road. Atmosphere was very eerie; as if the entire city had been taken over by ghosts.

Imagine the plight of those of Kashmiri Pandits going through this torture night after night. Nowhere did we ever see a policeman or any other security personnel en-route.

As we moved on, the head lights suddenly lighted-up some creepy movement far ahead of us. The passengers in the jeep said in one voice, Bisam-i-Allah and Allah-o-Akbar. The driver immediately use the dipper thrice to signal to the now visible crowd, maybe 50 yards ahead of us, that we were a friendly lot. We slowed down as the hostile crowd of some twenty to thirty young boys surrounded us immediately. Two or three of them were displaying AK-47 rifles and a few were having pistols in their hands. Soura-i- Yaseen was continuously recited by the staffers. Staragely, none seemed to be worried about me, despite the fact that they wanted me to take care of them, even when confronted by armed militants.

We identified ourselves as journalists representing Kashmir Times (considered their own newspaper by the militants). However, they singled me out and wanted me to step out of the jeep. I was absolutely unperturbed, though the rest of my fellow passengers almost collapsed expecting to see the last of me. There was further shock in store for my fellow passengers when they saw and heard me shouting at the leader of this blood-thirsty crowd, “Haya Ashqa (O! Ashiq)…………..” Before I could complete the sentence, he came running towards me trying to hide his AK-47 Rifle, and responded, “Papa, Tse kya chhukh yeti karan (Papa, how are you here)? I knew Ashq; a young, twenty year old six footer, with an athletic build, since 1984, when he was a member of the youth wing of the Awami National Conference led by G.M. Shah. He immediately ordered his crowd to get lost and allowed us to go.

However, he soon changed his mind. Within a fraction of a second, the crowd re-assembled and we were told that we could restart our journey only when we could not hear them anymore. With the engine of the jeep resting, the silence of the grave yard was broken all of a sudden by the bone-chilling chorus-singing by the militants, led by Ashiq himself, moving in 4- abreast column towards Haba Kadal (for obvious reasons, being a Kashmiri Pandit locality).

(Wake up! It is already dawn:

Russia has already been defeated. Now India is under attack

And it is the turn of Kashmir.

Those who were unlettered and illiterate in the crowd, (they formed the majority) would reply:

(Wake up! wake up! it will be utter chaos in the morning). 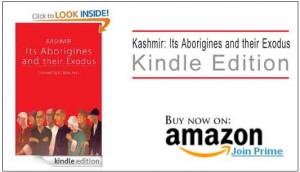 Imagine the plight of those of us (Kashmiri Pandits) going through this torture night after night. Nowhere did we ever see a policeman or any other security personnel en-route.