The Journey of Kashmir From Independence till Pre-Terrorism 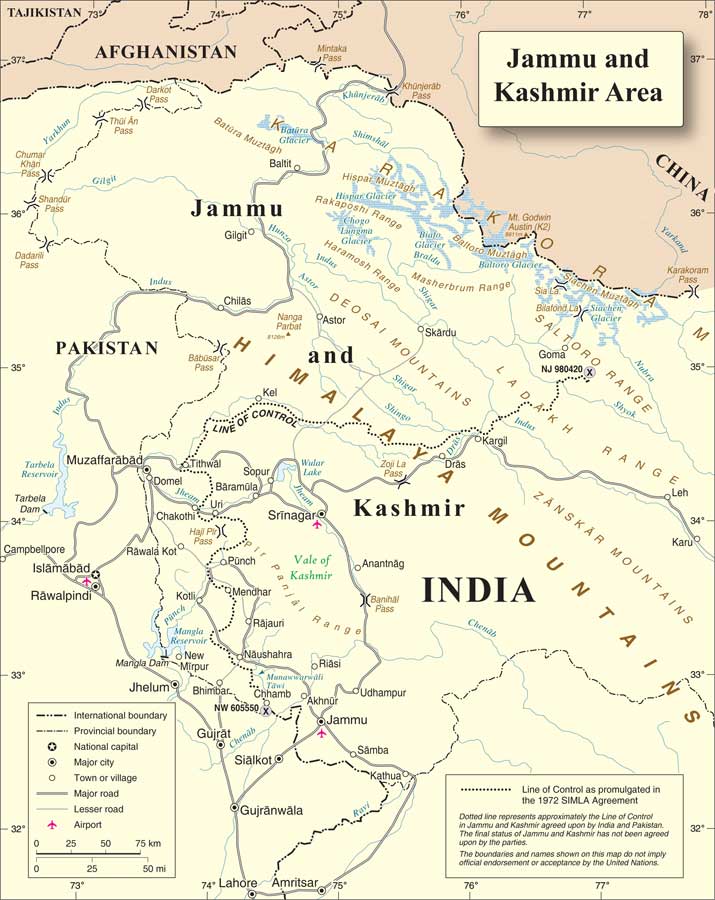 This second part of the “Kashmir-Know It Yourself Kit” covers the timelines from Independence to the Pre-Terrorism days. Shakespeare’s words “True hope is swift, and flies with swallow’s wings. Kings it makes gods, and meaner creatures kings “, rang still so true in this period, in spite of the calm before the storm that was to eventually come.

1947-49. Post-independence and formation of India & Pakistan, Kashmir   remained non-committal about joining either of the countries. Raiders invaded Kashmir in Oct 1947 and the Maharaja signed the instrument of accession in return for India’s assistance to evict them. Thus, commenced the first war over Kashmir between the two nations. India takes the Kashmir problem to the United Nations (UN) Security Council. On 01 Jan 1949, a ceasefire between Indian and Pakistani forces leaves India in control of most of the valley, as well as Jammu and Ladakh, while Pakistan gains control of part of Kashmir including Pakistan Occupied Kashmir (POK) and Northern territories. On 05 Jan 1949, UNCIP (United Nations Commission for India and Pakistan) resolution states that the question of the accession of the State of Jammu and Kashmir to India or Pakistan will be decided through a free and impartial plebiscite. Both countries accept the principle and Pakistan secures the withdrawal of Pakistani intruders followed by withdrawal of Pakistani and Indian forces, as a basis for the formulation of a Truce agreement whose details are to be arrived in future, followed by a plebiscite; however, both countries fail to arrive at a Truce agreement due to differences in interpretation. On 17 Oct 1949, the Indian Constituent Assembly adopts Article 370 of the Constitution, ensuring a special status and internal autonomy for Jammu and Kashmir, with Indian jurisdiction in Kashmir limited to the three areas agreed in the Instrument of Accession (IOA), namely, defence, foreign affairs and communications.

1950-55. First post-independence elections are held in J&K in 1951. The UN passes a resolution to the effect that such elections do not substitute a plebiscite. Sheikh Abdullah wins, mostly unopposed. There are widespread charges of election rigging which continue to plague all the subsequent elections.[i]

Sheikh Abdullah drifts from a position of endorsing accession to India in 1947 to insisting on the self-determination of Kashmiris in 1952. In July 1952, he signs the Delhi Agreement with the Central government on Centre-State relationships, providing for autonomy of the State within India and of regions within the State. Article 370 is confirmed and the State is allowed to have its own flag. The domination of Kashmir Valley (which has a 95% Muslim majority and accounts for more than 50% of the total population of Indian J&K) and Abdullah’s land reforms create discontent in Jammu and Ladakh. An agitation is launched in the Hindu-majority Jammu region against the Delhi Agreement, in favour of full accession with the Indian Union; the movement is withdrawn later, due to pressure from the Center. Secessionist sentiments in the Valley and communalism in Jammu feed each other. In 1953, the governments of India and Pakistan agree to appoint a Plebiscite Administrator by the end of April 1954. Abdullah procrastinates in confirming the accession of Kashmir to India. In August 1953, Abdullah is dismissed and arrested. Bakshi Ghulam Mohammed is installed in power, who then gets the accession formally ratified in 1954. India would resist plebiscite efforts from then on. Kashmiri activists continue to insist on the promised self-determination.[ii]

In Oct 1956, the state Constituent Assembly adopts a constitution for the state declaring it an integral part of the Indian Union. However in January 1957, UN passes another resolution stating that such actions would not constitute a final disposition of the State. India’s Home Minister declares that J&K is an integral part of India and there can be no question of a plebiscite to determine its status afresh. In April 1959, permit system for entry to the State is abolished. In October 1959, the State Constitution is amended to extend jurisdiction of Union Election Commission to the State and bring its High Court at par with those in the rest of India. Post the 1962 Indo-China war, in addition to illegal occupation of Aksai Chin, 5180 sq kms are taken over by China at Shaksgam in Northern Areas of Kashmir under Pakistan control. Mass upsurge occurs in Kashmir Valley when the holy relic is found missing from the Hazratbal Shrine in Dec 1963; the lost relic is recovered on 04 Jan 1964. Sheikh Abdullah is released in April 1964. He reinitiates talks with Pakistan, in an effort to resolve the Kashmir problem, taking into account the wishes of Kashmiris at the behest of Pandit Nehru. Nehru passes away on 27 May 1964 and the talks get stranded. Protest demonstrations occur in Kashmir Valley in December against Articles 356 and 357 of the Indian Constitution being extended to the state, by virtue of which the Centre can assume the government of the State and exercise its legislative powers. The special status accorded to the State under Article 370, continues to get eroded over years.[iii]

In May 1965, Sheikh Abdullah is arrested on his return to India from Mecca on account of his meeting with the Chinese Prime Minister at Algiers. Angry protests occur in Kashmir Valley; The Plebiscite Front initiates a satyagraha for Abdullah’s release and many workers are arrested. Pakistan takes advantage of the discontent in the Valley and launches “Operation Gibraltar”. An Indo-Pakistan war breaks out which ends in a ceasefire on 23 September. In January 1966, Tashkent Declaration is signed by both countries agreeing to revert to pre-1965 position. Pakistan supported guerrilla groups in Kashmir increase their activities after the ceasefire. Kashmiri nationalists Amanullah Khan and Maqbool Butt form another Plebiscite Front with an armed wing called the Jammu and Kashmir National Liberation Front (NLF) in POK, with the objective of freeing Kashmir. Butt crosses into the Valley in June 1966 and engages in clashes with the Indian army. He is arrested and sentenced to death in 1968 but escapes to POK with help from the local people.[iv]

Third Indo-Pak war breaks out in Dec 1971 resulting in a humiliating defeat for Pakistan and formation of independent Bangladesh. India and Pakistan sign the Simla Agreement in July 1972, which has a clause that the final settlement of Kashmir will be decided bilaterally in the future. The cease-fire line in Kashmir becomes the ‘Line of Control’ (LC) and that both sides agree to respect the same. Pakistanis hold India responsible for the dismemberment of their country. In November 1974, Kashmir Accord is signed by G.Parthasarathy for Indira Gandhi and Mirza Afzal Beg for Sheikh Abdullah, who is out of power at that time. The Accord retains Kashmir’s special status, but the state is termed as a ‘constituent unit of the Union of India’. Opposition parties and Pakistan condemn the Accord. Abdullah is installed back in power. Later in 1977, he would speak in favour of protecting the autonomy and special status of Kashmir.[v]

Maqbool Butt is arrested on his return to the Valley in 1976, Amanullah Khan moves to England and NLF becomes Jammu and Kashmir liberation Front (JKLF). The USSR invades Afghanistan in 1979. The US and Pakistan are involved in training, recruiting, arming, and unleashing the Mujahedin on Afghanistan. The mujahedin so recruited would take on the agenda of establishing Islamic rule in Kashmir from the late 1980’s. Indian and Pakistani armies engage in clashes in Siachen Glacier, a no-man’s land at an altitude of 20,000 ft with extreme weather conditions in 1984, where the cease-fire line had been left undefined by 1972 Simla Agreement. Siachen is perceived to be of strategic importance for access to the Northern Areas as well as the rich water reserves in the form of Glaciers, and the spasmodic clashes would continue through later years, costing thousands of lives and billions of dollars.[vi]

The loss of the Soviet forces at the hands of the US supported Mujahideen gave a false sense of resultant adventurism to the ISI handlers. They believed that time was ripe for Kashmir to be taken by employing the now un-employed Mujahideen. The US too turned a blind-eye to the evil plans of their “most trusted Ally” of the times.