The Issue of Religious Extremism 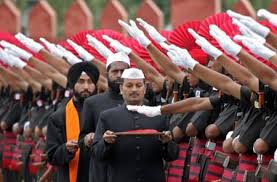 Religion is an organized collection of beliefs, cultural systems and worldviews that relate mankind to the supernatural and spirituality. Most religions have numerous signs and symbols as well as sacred histories that are intended to give meaning to life and explain the origin of life and the universe. It is nearly impossible to determine accurately, in strength, the total number of faiths and religions that exist today. However, the 21st century has seen the rise of “major” religions such as Hinduism, Christianity, Islam, Judaism, Buddhism etc. and “other” religions such as Confucianism, Taoism, Shinto and Zoroastrianism.

The reasons for the existence of religious extremism are quite a few. Firstly, ignorance and lack of knowledge and of education lead many a youth and young women towards inaction. The minds of these young people are almost closed to modern ideas and developments.

Religions and other faiths bring hope and consolation to billions of people, and hold great potential for peace and reconciliation. They have also, however, been the source of tension and conflict. This complexity of defining “religion” and “belief,” is illustrated by the continuously developing history of the protection of freedom of religion or belief in the context of international human rights.

Religion and the UN

The United Nations recognized the importance of freedom of religion in the “1948 Universal Declaration of Human Rights”. Article 18 of the declaration states that “Everyone shall have the right to freedom of thought, conscience and religion. This right shall include freedom to have a religion or whatever belief of his or her choice.”

In 1966 the UN passed the “International Covenant on Civil and Political Rights” further enhancing its prior statement to address the manifestation of religion or belief. Article 18 of this Covenant includes four paragraphs, which are as follows:

…religious extremism is not advocated, preached or sanctioned by any religion in its pure form.

What is Religious Extremism?

Religious extremism means the holding of extreme religious view by the followers of a particular religion or sect against other religions or sects.

The reasons for the existence of religious extremism are quite a few. Firstly, ignorance and lack of knowledge and of education lead many a youth and young women towards inaction. The minds of these young people are almost closed to modern ideas and developments.

Secondly, religious extremism develops rapidly in an atmosphere of hatred, distrust and enmity. One religious class or sect hates another simply because there is a difference of beliefs or ideas between them. One religious group distrusts another because they distrust or question each other’s intentions. Prolonged hatred and distrust result in deep-rooted enmity. Sadly and regrettably, some extremists developed intense hatred against each other, which culminates into unprecedented violence.

Thirdly, perhaps the worst form of religious extremism is reflected in terrorist acts across the country. Religious extremists easily organize themselves into armed groups and bands and provide, military training for terrorist acts and guerrilla warfare. Furthermore, there can be national religious extremism that can cause religious wars between one nation or country and another. Such wars were common in olden times when the Crusades were fought between the Christians and Muslims. The fights between the two religious communities among the Christians that is, the Roman Catholics and Protestants and among the Muslim sects and groups side by side caused tremendous human suffering.

In the past two decades, religion has been at the centre of most violent conflicts around the world, thereby gaining notoriety as one of the prime security challenges confronting the world.

In fact, religious extremism is not advocated, preached or sanctioned by any religion in its pure form. Buddhism is a religion of peace and humility. Christianity is a religion of social goodness and progress. Islam preaches universal brotherhood equality and justice. In their first pure form, world religions did not have any room or scope for class or group differences. God Almighty sent his Prophets and revealed his Holy Books to convey the same messages to all mankind and to make the people solidly united. The later creation of religious groups and sects, with the resultant disputes, was against the spirit and principles of true religion. It is our foremost duty to create unity and oneness in our ranks religiously.

The Difference between an Extremist and a Fundamentalist

A fundamentalist is someone who believes in a specific interpretation of their holy text and strictly adheres to its tenets. A fundamentalist will believe that their bible represents the absolute truth in terms of matters moral as well as literal historical accuracy. Many fundamentalists are characterized as intolerant of those with views in opposition of their own or those with secular beliefs.

An extremist is someone who takes their religious beliefs to a fanatical level causing them to behave in ways that are not understood by the general public. An extremist may believe in using coercion, fear, or violence as means to bring about a religious change. Often religious extremism is seen in opposition to a person, people, or government that is acting against the fundamental beliefs of a religion. Especially in the Middle East, religious extremism can be closely tied to extreme nationalism.

Violence Caused Due to Religious Extremism

Religion could serve, and has indeed served as an instrument of social harmony in many civilizations. Paradoxically, however, it has also served as a motivation for violence, hence its indication in some literature as a ‘double-edged sword’. In the past two decades, religion has been at the centre of most violent conflicts around the world, thereby gaining notoriety as one of the prime security challenges confronting the world. Some examples from history that are indicative of religious violence are mentioned below:

One thought on “The Issue of Religious Extremism”