Home  >  Spotlights  > Geopolitics  >  The IS challenge: Europe needs to get its act together

The IS challenge: Europe needs to get its act together 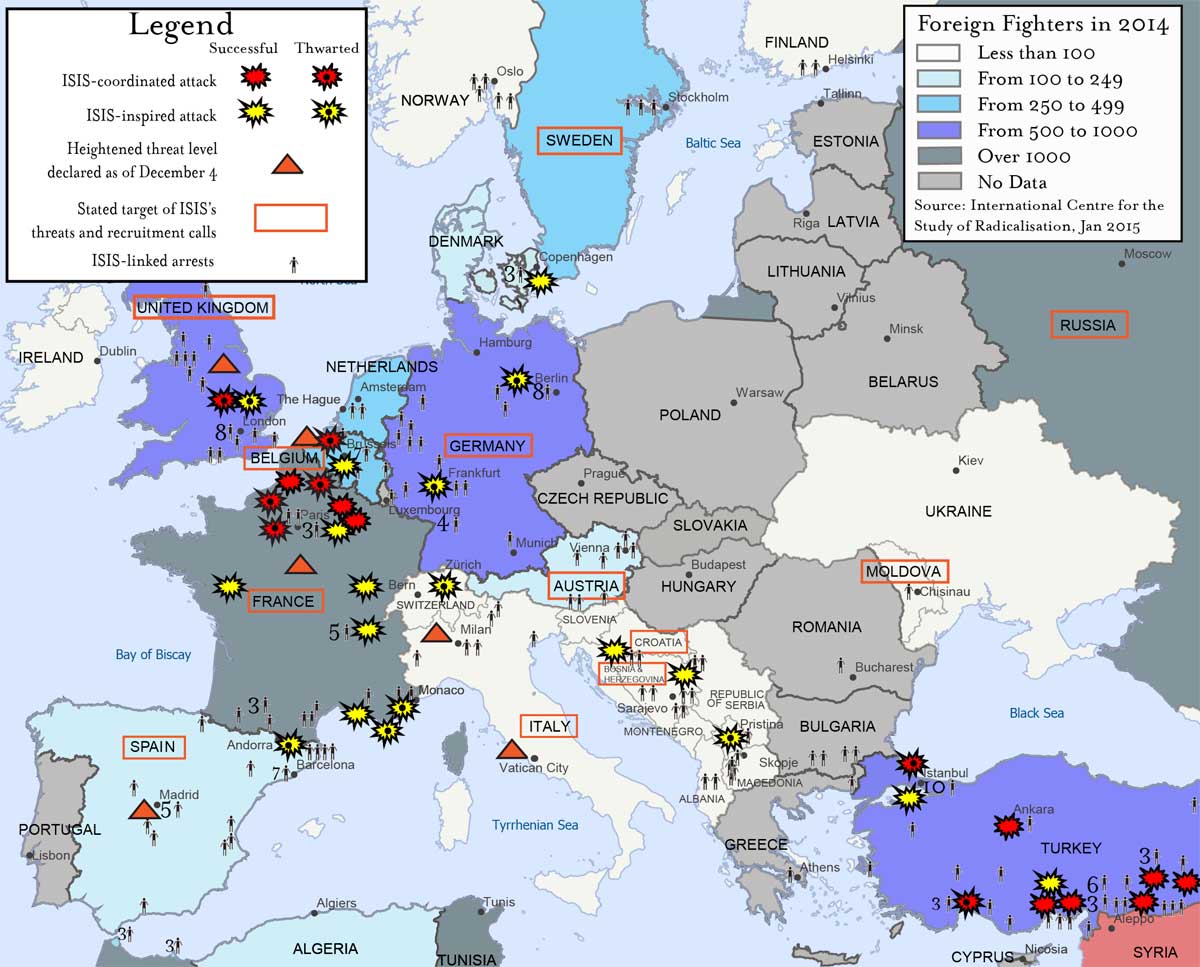 Islamic State (IS) which has already overtaken Al-Qaeda is currently the most treacherous, wealthiest and better organized terrorist organization in the international arena. While the continuous bombarding in the IS-controlled region may have weakened the terrorist outfit, but the resolve of Abu Bakr al-Baghdadi and his cohorts of retribution has not lessened and the danger of carrying out terrorist activities in Europe has enhanced manifold. Analysts mention that future attacks will be more sophisticated and devastating.

IS has emerged as a fulcrum of terrorism against Europe and America, hence several independent terror outfits as well as alienated people of the society have joined the outfit to settle their real or imaginary grievances.

The US-led ‘Operation Inherent Resolve’, as well as restrictions on international funding to IS, has had adverse impact on its recruitment drive as now it is not spending lavishly on its cadres. According to an estimate, the United States and other countries made more than 10,000 air raids in the IS-controlled areas in which more than 20,000 IS supporters were exterminated and the outfit lost 35 percent of its territory.

IS earns money through prowling, extortion, donations and by selling petroleum products from the occupied oil fields. According to a rough estimate, in the past, IS was earning more than 1.8 million Pounds (app. 2.59 million USD) from the captured oil fields every day, but now the oil prices are considerably low and the combined forces have recaptured few oil fields from IS. Hence, its revenue is reduced to an alarmingly low level.

There are also reports that because of air strikes, financial restrictions imposed by several countries the financial condition of the outfit has deteriorated considerably and the organization is compelled to sell the important body organs of prisoners as well as injured cadres of IS.

Nonetheless, the fanatics are still joining the outfit from several parts of the world and IS can target some places in Europe to prove their strength and viability. The bomb blasts in Paris and Brussels have proved the capability of the outfit in carrying out terrorist attacks in Europe and other places.

The IS is sending its cadres to Europe as refugees through migrant boats. As very large numbers of refugees are entering Europe from disturbed areas, it is very difficult for security agencies to verify the antecedents of all those who are landing on their shores.

The European Union should constitute a joint task force to deal with the threat of IS.

IS has emerged as a fulcrum of terrorism against Europe and America, hence several independent terror outfits as well as alienated people of the society have joined the outfit to settle their real or imaginary grievances.

IS which has an efficient, secret and protected communication system has also cultivated sleeper cells as well as support agents in Europe and these support agents would assist the action agents in carrying out terrorist activities.

The European Union (EU) should constitute a joint task force to deal with the threat of IS. The task force would be more effectual and can mobilize resources early, as a single entity it can take and implement decisions more effectively. It can overcome the language barrier and can utilize intelligence more efficiently. The task force can be financed by EU and its object should be to check the terrorist activities of IS and eradicate its influence from Europe.

The European counties should emphasize on their citizens that IS is losing ground and who so ever will go to join the terrorist outfit will be exterminated in air strikes or will be slaughtered by IS under the pretext of spy.

The government should involve colleges, student organizations, NGOs and politicians to counter the threat of spread of radical ideology before it subvert the democratic institutions, social fabric and rule of law.

The condition of Muslims in Europe is pitiable and they are treated as second-class citizens. The European countries must realize that alienation, poverty and racial discrimination generate extremism and the younger people are inclined to join the terror outfits. Hence, on the one hand, where the government should try to curb the discrimination, on the other hand, there should be stringent punishment for engendering hatred in the society.

The IS is utilizing social media and internet to lure young people in the west to join the terrorist outfit by sending-out impressive messages as well as combat lessons on the internet. Hence, the intelligence agencies of these countries should also employ high-quality professionals to counter IS propaganda in social sights; the data analysts should recover details about the finance and should try to collect intelligence through technical means.

Several thousand jihadists who will return from Syria and Iraq once the IS is (hopefully) decimated would be a great danger to Europe as they are trained terrorists and may use Vehicle Borne Improvised Explosive Devices (VBIED) to carry out terrorist activities. The security agencies should formulate a plan to handle the extremists returning from Syria and Iraq and should also start counter-radicalization and de-radicalization campaign.

The general masses, especially Muslims, should be educated about the rising danger of Islamic terrorism and safeguard the youths from becoming the prey of malicious propaganda about the establishment of Islamic Caliphate in any part of the world.

The government should involve colleges, student organizations, NGOs and politicians to counter the threat of spread of radical ideology before it subvert the democratic institutions, social fabric and rule of law.

The obliteration of IS is not enough. There is a danger that after the annihilation of IS, there would be small Islamic terrorist groups that would emerge…

There are reports that various imams are distributing extremist literature to Muslim prisoners as well as to select persons in mosques. These imams are also collecting funds to assist terrorists. The government should take stringent measures to punish such imams or other religious fanatics.

The obliteration of IS is not enough. There is a danger that after the annihilation of IS, there would be small Islamic terrorist groups that would emerge and that these leaderless factions would get involved in reckless killings just to demonstrate their strength and influence.

In fact, there is a need of eradication of all Islamic terrorist outfits and this is feasible only if various countries assisting these terror organisations stop being so munificent towards such thugs for meeting their short-term, petty ambitions. While a few (known) countries are rendering financial assistance, Pakistan and military-controlled Inter Service Intelligence (ISI) is giving arms, ammunition, training and financial assistance to several terrorist organizations. The United States as well as European countries must prevent countries and organizations to render assistance to terrorists.

The US decision of deputing additional troops and 8 Apache attack helicopters against IS to recapture Mosul town is important as retake of second most important city by Iraqi troops would be a great jolt to the terrorist outfit.