The Rules of the Game:The current century began in an intensely violent manner and there are no signs of a let up. Two and a half deadly wars are being fought in our neighbourhood and threaten to spread further and may even affect India in the years ahead.

These are the results of great power politics, ambitions and economic needs. It is therefore interesting to go through some of the statements by Western strategists and political analysts from time to time. 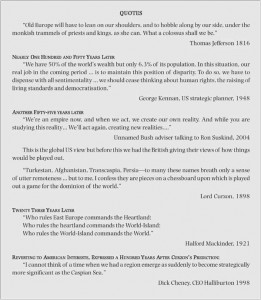 There is a common thread running through them – that seeks total dominance over the rest of the world.

Under the previous order of world affairs, private multinational oil companies controlled a large percentage of the resources of energy and their development.

The current trend is towards ownership of assets by national oil companies.

Oil is no longer just traded on the spot market in New York or London, but countries like China and India with their rapidly growing economies are now buying assets in the country of origin in long term bilateral or trilateral arrangements.

Iran is now selling 70% of its oil and gas in euros; it has also sold oil to China in yuan. It has constructed a brand new oil bourse on the Kish island in the Persian Gulf and is expected to trade in Euros. Europeans are buying Iranian gas and there are possibilities of a three-way agreement between the Iranians, Gazprom of Russia and the Austrians.

This is also done to replace the old system of production sharing arrangements where the investing company had the upper hand in acquiring the profits.

Main Players and their Assets

Wars in Afghanistan and Iraq were not prompted by terrorist attacks in New York and Washington, nor waged to spread democracy in West Asia or enhance security at home. Instead, they were conceived and planned in secret long before September 11, 2001 and were undertaken to control petroleum reserves.

Even though they control only 9% of the fields, companies like Exxonmobil had a turnover of 450 billion dollars in 2006.

China National Petroleum Corporation, ONGC Petrobras and Statoil Norway control 16% of the reserves. Fastest growing are the Chinese companies like Sinopec and CNOOC operated in six countries in 1999 and today in 40.

Since the beginning of oil age, the world has consumed 950 bbl of oil, 30 % of this in the last ten years.