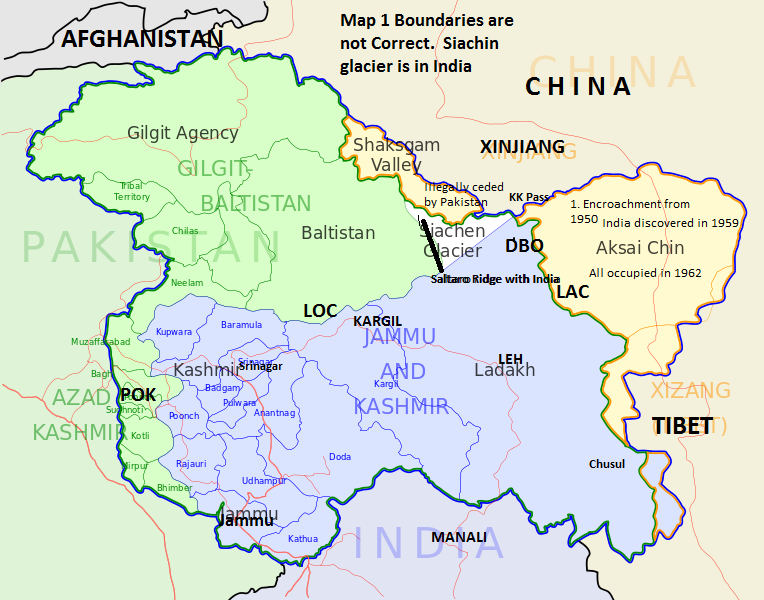 Distorted Pak map: Erstwhile Jammu & Kashmir showing illegal occupation of Pakistan Occupied Kashmir and Gilgit Baltistan by Pakistan and Shaksgam and Akshai Chin by China The map is not accurate for boundaries, particularly the alignment of the line shown to Karakorum pass, leaving Siachin glacier in Pak occupied territory.

Network and landline connections in Jammu and Kashmir, that have remained restricted in parts since 05 August this year, have been restored in full. All post paid mobile services are functional now. Since most people in the state have post-paid connections, it implies that telephonic connectivity stands restored.

It is reiterated that on August, 05, the Parliament of the Nation passed legislations to reorganise the state of Jammu and Kashmir into two Unions Territories and to modify certain temporary provisions of Article 370 of the Constitution that were causing a hindrance in the seamless integration of the state with the Indian Union.

“When curfew is lifted there will be a blood bath,” said Pakistan’s Prime Minister, Imran Khan, in the course of his address to the United Nations General Assembly (UNGA). He parroted this phrase and other hate filled rhetoric with monotonous regularity all though his stay in the United States. That Pakistan was poised to respond with belligerence to counter the progressive changes in the state became quite evident by the behaviour of the country’s prime minister on foreign shores. Against this backdrop, the decision of the government to impose certain restrictions was very well conceived and mature. The temporary restriction y successfully contained activities of foreign sponsored anti-national elements that, as was apparent, were determined to engineer subversion, violence and disruption.

The fall out of this very mature decision is that the changeover is progressing in a very peaceful manner despite inimical countries trying their very best to orchestrate the “bloodbath” that they have been predicting so confidently. The negative reaction that Pakistan had planned was thus marginalised.

The restrictions have since been eased in a gradual manner since August, 16 and by the first week of September most restrictions were removed.  Even after the restrictions were removed Kashmir faced what is termed as an “internal curfew” which was the result of pressure being exerted by terrorists and other thugs and gangsters in the payroll of Pakistan to keep businesses closed. These elements went from place to place threatening the people of dire consequences if the “voluntary curfew” was opened. Kashmiris’ are adept at handling situations of this nature; brisk business is being done by shopkeepers by opening up before and after working hours and services like schools have been sending out assignments etc. in a work from home system. Ultimately, this plan by Pakistan also failed as miserably as its diplomatic initiative had failed.

It is important to realise that all nations would have carried out a deep study of Article 370, in legal and governance terms. If its removal had the potential of causing harm to the people or curbing their liberties the same would have been reflected very strongly by the international community. The world is quiet since it is convinced that seamless integration of Jammu and Kashmir with the Indian Union is in the interest of the people and there is no possibility of the Indian government ordering “genocide” as is being repeatedly said by Pakistan. The manner in which the restriction have been removed also indicates the commitment of the government and the country to not cause inconvenience to the people any more that what is absolutely necessary. The lifting of restrictions will further convince the world that the reorganisation and restructuring is going well.

As the new structure comes in place, the government is likely to move with its ambitious plans to rehabilitate the region. There will be well directed initiatives towards youth empowerment and economic uplift. The message to the people is “You root for peace and democracy; the nation will work with you towards employment, development and prosperity.” Such a message which rates quality of life above all else is definitely in tune with modern day aspirations across the globe. The youth of Jammu and Kashmir will definitely relate to the same.

The next big step will be putting in effect the new dispensations of two Union Territories which is slated for 31, October. There is a need to remain alert and vigilant since Pakistan is unlikely to give way easily and is bound to create massive hurdles. The recent attempt to smuggle in large caches of arms into Indian Punjab with the help of Drones was meant for Kashmir. It is indicative of the desperation that Pakistan is witnessing at the moment because of its inability to respond effectively. That it will do something drastic and destructive is not out of the realm of reality.

On a lighter note it can be said that the people of the state have proved that it is possible to live well without use of the modern communication technology that dominates our lives and is not very good for us. The world will not fall apart if we do not use modern appliances, we will in fact, emerge reenergised from the digital detoxification. Parents across the country should now restrict their children from use of mobiles etc for specified periods. Adults should also restrict the use of their mobiles akin to the practice of fasting.

The people on Jammu and Kashmir need to strengthen roots of democracy in their state; they need to integrate with their nation and onwards with the world. They need to optimise the resources that their nation is providing for their uplift and development. This aid is not a favour; it is a necessity to facilitate them in getting over the troubled era of foreign sponsored terrorism; they do not need to show gratitude, they simply need to put it to good use. It is hoped that the people of the region will continue with the cooperation that they have been extending over the last two and a half months and the new dynamic changes will become effective seamlessly. Such a situation would be the final nail in the coffin of immoral Pakistani manipulations.