The Dilemma of Xi Jinping 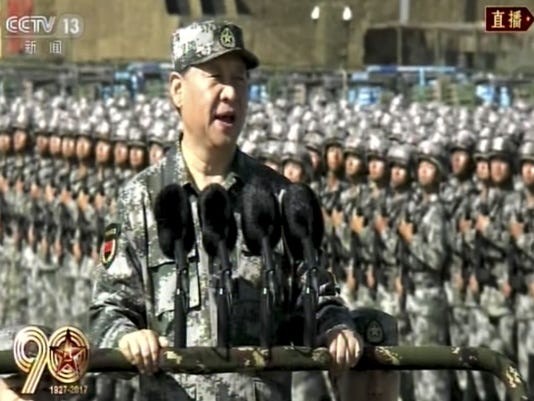 Colonel Zhang Shuili, spokesperson of China’s Western Theatre Command (WTC) briefed media on September 8 that Indian Army illegally crossed the Line of Actual Control (LAC) in Shenpao Mountain (Chinese have a name for any feature or place on earth) near the south bank of Pangong Lake in Ladakh on September 7, Indian troops fired warning shots and troops on their (Chinese) side opened fire in retaliation. He then spewed the standard line that India should “immediately stop dangerous actions immediately withdraw cross-line personnel, strictly restrain front-line troops, and strictly investigate and punish personnel who fired shots to ensure that similar incidents do not occur again”.

What actually happened on September 7 is not difficult to understand. Beijing received a rude awakening on night of August 29-30 that its troops trained to fight World War IV with iron rods, stones, clubs with steel spikes and barbed–wire batons will first need to fight World War III. WTC possibly appreciated that its stealthy intrusions to occupy Black Top and Helmet Top in ChushulHeights will meet a sleepy response from the Indians as was the case in May 2020 at other points in Eastern Ladakh. But the PLA were shocked to see that Indians had their warning system in place and troops of India’s Special Frontier Force (SFF) had raced ahead to occupy these features that dominates PLA encampment to Bejing’s chagrin. India’s subsequent occupation of the ridgeline South of Pangong Tso (that looks down at Chinese positions at Finger 4 to Finger 8 on the north bank of Pangong Tso) as also occupation of Trishul and Rechen La covering the Spangur Gap has upset PLA’s intrusion plans.

India suffered the loss of Company Leader NyimaTenzing of SFF who perhaps fell to a mine of 1962 vintage but inside sources in China fear more than a dozen (16?) PLA troopers went ‘missing’. That is why PLA requests for Brigade Commander-level talks and abduction of five youth in Arunachal Pradesh. Incidentally, WTC reference to “border troops” is misnomer. Bordertroops are anyway under command the PLA but these intrusions activities are obviously by regular PLA considering specially trained troops were brought in to attack and brutalize our troops during the Galwan clash on night of June 15-16. PLA, border guards or whatever troops, they all have political commissars breathing down their necks and reporting to the Communist Party of China (CPC). There is considerable commotion in social media over employment of the SFF – very professional and hardy troops of Tibetan origin. Many possibly heard of them for the first time. But SFF troops were employed during the 1971 Indo-Pak War against East Pakistan, have been periodically deployed on the Saltoro Range in Siachen Glacier area and were deployed and ‘used’ in operations in Ladakh during the 1999 Kargil Conflict also.

When Xi Jinping ordered PLA to make pill boxes on Finger 4 on the north bank of Pangong Tsoabove the Indian post, Xi’s obviously wanted to wrest the complete Pangong Tso lake from India, opening fresh avenues for future operations including along axis Pangong Tso–Tangse–Chang La-Leh. These plans have been effectively dented through the redeployment done by India. There is little doubt that Xi would have kicked WTC for failing to stealthily occupy Chushul Heights on the August 29-30 and subsequent failed attempts at intrusions.

General Zhao Zongqi, commander of PLA’s WTC is Xi’s blue-eyed having occupied Doklam Plateau after the India-China standoff was called off in 2017. But given that WTC has brought in two Divisions plus to invade Eastern Ladakh, one wonders why he did not go for Chushul heights and the ridgeline on south bank of Pangong Tsosimultaneous to blocking Indians beyond Finger 4 and intrusions in Galwan, Gogra/Hot Springs and Depsang in the month of May itself? Was this a strategic oversight or was he confident he could do this later. In both cases Xi would be angry. It is in the backdrop of this frustration that PLA would have tried another intrusion on September 7 and beat a hasty retreat when warning shots were fired by our troops.

Xi’s dilemma in Eastern Ladakh now is how to progress operations further. PLA would have been ordered to continue probing in areas south of Pangong Tso but he knows it is a non-starter. That is why Xi’s decision to open up Pangong Tso to international tourists with all the fanfare. In other abovementioned areas, further advance by PLA is stonewalled by heavy Indian deployment. Forging a breakthrough implies outbreak of hostilities perhaps leading to limited war, repercussions of which can reverberate at seas of the Indo-Pacific. Can China take this risk with the uncertainty over flare up into an international conflict?

The CPC has no value for lives. 45 million Chinese died in Mao’s Great Leap Forward (1958-1962), followed by the Cultural Revolution (1966-1976) that killed some 20 million Chinese. China has to its disgraceful ‘credit’ killing of about one million Tibetans, Tiananmen Square massacre, thousands of Uyghurs in Auschwitz-like concentration camps and zero individual freedom for Chinese citizens. In addition to PLA, Xi has assumed command of all police and para-military forces. But it is not erstwhile China where thousands/millions killed will not be questioned. That is why Xi has made deliberate effort to hide Chinese deaths because of the China Virus. A limited war with India can result in thousands killed given the lethality of present era weapon systems. Beside India may parade some of the PLA gone “missing” which would be embarrassing for Xi. On the other hand, if conflict goes international, the casualty figures would be many times more. Conflict at international level will hardly spare China’s overseas bases and BRI projects.

Xi Jinping’s problems at home are multiplying. Among hiccups in his pet Belt and Road Initiative (BRI) in various countries, the ‘Pizza Scandal’ in Pakistan involving former General Asim SaleemBajwa, Prime Minister Imran Khan’s aide and chairman of China-Pakistan Economic Corridor (CPEC) has forced Xi to put off his visit to Pakistan. With downslide in economy and impending food shortages, Xi is spreading the word at home for China’s economy to be more self-sustaining in a post-pandemic world of uncertainty, weakened demand and hostility. Therefore Xi would logically go for status quo in Eastern Ladakh and look for India becoming amenable to accept the same with China keeping territorial gains it has made in Pangong Tso (east of Finger 4 along the north bank), Gogra-Hot Springs and the considerable intrusion in Depsang. India would logically continue to demand reversion to April 2020 status. This means PLA will have to continue deploying considerable forces least thinning out could attract a push back by India. The alternative to Xi is to open another front elsewhere, which may evoke a similar response from India like in Chushulheights/south of Pangong Tso. The second alternative for Xi is to force a limited wardepending on how much he is deranged. India naturally is prepared for all eventualities.

With continuing bureaucratic inhibitions, no official Indian statement has made a mention of SFF employment in current operations. Same was the case during 1999 even as India Today had then published a write up on the SFF. We must be really stupid to think that China is unaware of the SFF. We must employ these excellent troops optimally in pro-active manner. Similarly, the Ladakh Scouts should not be held back but should be in the forefront where the ITBP is. This should also be the norm in the central and eastern sectors.

3 thoughts on “The Dilemma of Xi Jinping”