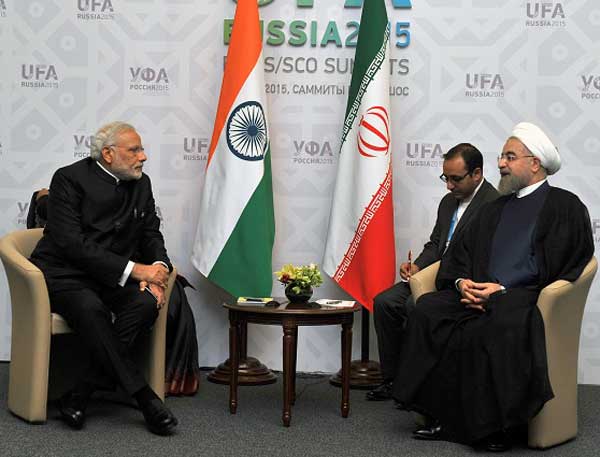 India and Iran share a cultural relationship since Neolithic age. However due to certain extraneous factors the relationship has become complicated if not very complex. Republic of India and Imperial state of Iran established diplomatic relations on 15 Mar 1950. Relations suffered during cold war period as non-aligned India was more inclined towards erstwhile USSR and Iran was in USA camp.

India is world’s 4th largest oil importer and going to be 3rd shortly whereas Iran is 2nd largest oil exporter to India supplying approximately 4,25,000 barrels of crude oil per day.

After the Islamic revolution of 1979 the relations between two countries improved though India did not support the revolution. Iran’s continued support for Pakistan and India’s support for Iraq during Iran-Iraq war were stumbling blocks. Both countries supported Northern alliance in 1990 against Taliban regime and supported anti-Taliban government led by Ashraf Ghani. Both countries signed a defense co-operation agreement in 2002. They share common strategic interests but differ on some key foreign policy issues.

The relationship also suffered due to Iran detaining Indian ship carrying Iraqi crude oil and due to attack on Israeli diplomat in 2012 in New Delhi in which fingers were pointing for Iranian involvement.

India is world’s 4th largest oil importer and going to be 3rd shortly whereas Iran is 2nd largest oil exporter to India supplying approximately 4,25,000 barrels of crude oil per day. India is largest foreign investor in Iran’s oil and gas industry. India exports diesel to Iran. Attempts to get natural gas through Iran-Pakistan-India gas pipeline have not borne fruits. India at present is not taking natural gas from Iran. India’s energy relationship with Iran hasn’t been without fissures. India doubts Iran’s reliability and stability as supplier. Iran is known to have renegotiated deals, giving better terms to Chinese companies and in short a hard negotiator.

Infrastructure . Highway between Zaranj and Delaram is being built with financial support from India. The Chabahar port is jointly financed by India and Iran. Chabahar will give access to oil and gas resources from Iran and central states this port will neutralize Chinese monopoly of Gwadar port in Pakistan. Chabahar can also be used for bi-lateral trade with Iran and central states.

Iran and Israel are having military rival relations and Israel is one of India’s main defense supplier.

Some of the social, cultural and historic ties which both countries share are that Iran regards itself as head of Shia sect and India has 10 to 15% shia population. India has also got considerable Zorastrians or Parsi population. Another factor is considerable number of Iranian students who come to India for studies. With removal of economic sanctions from Iran there is tremendous scope for development of bi- lateral trade other than oil which is marginal at present. The recent visit of Iranian Foreign minister Javed Zarif can be termed as new chapter in bi-lateral ties.

The intricacies of bi-lateral ties can be judged from the fact that before FM of Iran’s visit the King of Bahrain, Saudi crown Prince, FM of Oman and Chairman of Kuwaiti National Security visited India. Iran and Israel are having military rival relations and Israel is one of India’s main defense supplier. In agriculture and tourism also India depends on close ties with Israel. Qatar is India’s largest natural gas supplier and India also gets crude oil from Saudi Arabia and other Gulf co-operative states. This region has large population of Indians and their remittance to their homes is a large sum which can’t be ignored. Another factor to be considered is large Sunni population in India which is around 120 million. India has to maintain an intricate balance between its own vast and varied Muslim population. Thus it can be seen that there are counter pressures and counter-counter pressures on Indo-Iranian ties.

The trade with Iran should not be limited to oil and diesel only but should diversify to both countries needs and requirements.

India can explore Iranian markets for machinery both light and heavy, consumer goods including fast moving consumer goods, IT and computer items, electric and electronic goods ,apparels and textiles, pharmaceuticals and medicines and consumer services. After removal of economic sanctions from Iran there is unlimited opportunity to develop bi-lateral ties between both countries. India is now correctly thinking of having SEZs and economic and Industrial clusters close to ports and potential ports. Though there has been substantial progress in negotiations, projection of Indian goods and services and follow-up of cases the same urgency is needed in trade with Iran.

I personally feel that India should acquire SEZ near Chabahar port and should make it a hub for trade with Iran and other central countries. The trade with Iran should not be limited to oil and diesel only but should diversify to both countries needs and requirements. The conflicting view- points will remain between bi-lateral relations but can be overlooked for better trade and commercial ties.