The Challenge Posed by China’s Military Posture in Tibet 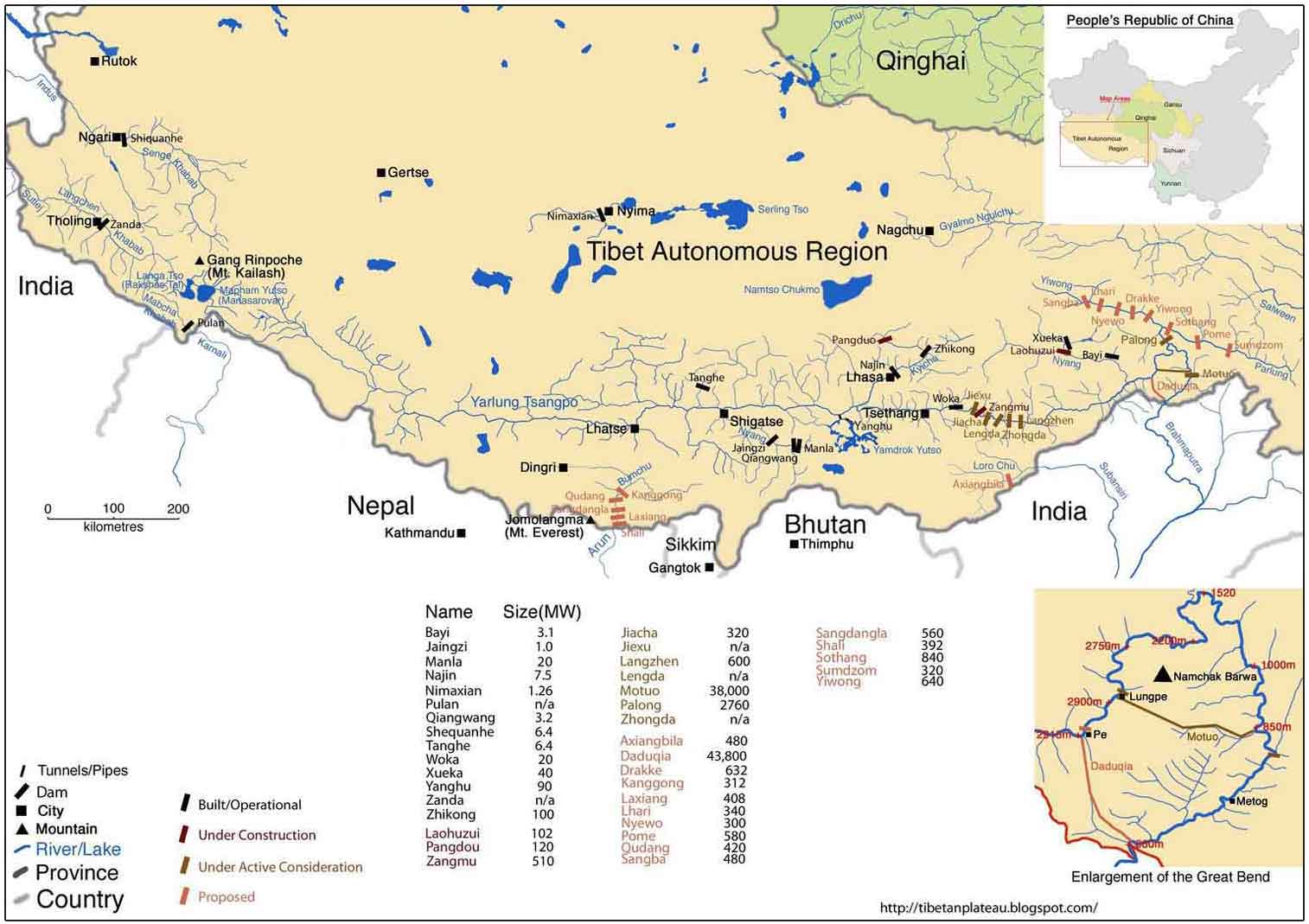 Hydropower Project on the Yarlung Tsangpo (Upper Reaches of the Brahmaputra) in Tibet. Map © http://tibetanplateau.blogspot.in/

China is in forceful occupation of approximately 38,000 square kilometres of Indian territory in Aksai Chin in the west and claims a further 90,000 square kilometres of Indian territories in the east, a claim that was reiterated with vehemence by Beijing as recently as in June 1998. This territorial dispute resulted in the deployment of military forces by both India and China in direct confrontation along 3,488 kilometres of what is called the Line of Actual Control (LAC),1 in place of a mutually recognised international border between them. To add fuel to fire, the alignment of the LAC is also disputed, causing considerable tension between the two countries.

Despite the two countries having signed the Agreement on Maintenance of Peace and Tranquillity along the LAC in 1993, Chinese incursions across the LAC continue to be a regular feature and have continued to date.2 If anything, the frequency of these intrusions registered an upswing after the demise of Deng Xiaoping, in February 1997, with exponential increments thereafter when India conducted nuclear tests in May 1998. “Chinese troops have crossed over into Indian territory over 500 times since January, 2010. But much more than the sheer number of these ‘transgressions’ – the government refuses to call them ‘intrusions’ – the increasingly aggressive behaviour of the 2.5-million-strong People’s Liberation Army [PLA] along the LAC that remains a major worry.”3

India cannot sweep this under the carpet, cannot reduce the threat manifest in the fact that the PLA has:

In an address to the U.S. House International Relations Committee, Benjamin Gilman, the chairman, stated that the greatest threat to peace in Asia was not the tensions between India and Pakistan but emanates from China, on India’s northern border. “Ever since occupying Tibet in 1950, the PLA has worked feverishly to build networks of all-weather roads, crisscrossing . . . Tibet. Two other major roads lead to Pakistan and Nepal. . . . The new road system allowed China to move large military formations swiftly along the entire length of the Indian border, affording Chinese generals the ability to concentrate mutually supporting armies almost anywhere along the frontier. A chain of permanent bases, many with huge underground storage sites and heavy fixed fortifications, linked to rear echelons by good roads . . . along the length of the border with India.”6

Of its seven military regions, Lanzhou and Chengdu Military Regions are responsible for the security of western China. Lanzhou and Chengdu Military Regions account for the deployment of two army groups and the Xinjiang Military Districts in the former and two army groups and the Tibet Military District in the latter.7 Western Tibet that covers Aksai Chin falls under the Lanzhou military command. The Tibet Military District covers central, northern and eastern Tibet with two infantry brigades and an infantry regiment. These military resources account for 30 per cent of the forces in the Lanzhou and Chengdu Military Regions based on the border between India and Tibet and the remainder in central Tibet and the northwest.8 The four armies based in western China could be employed to support operations from Tibet against India through flanking attacks through Myanmar or reinforce an offensive from the north. In addition, there are 17 secret radar stations and 14 military airfields, 8 missile bases, at least 8 intercontinental ballistic missiles (ICBMs) and 20 intermediate-range missiles.

The four armies based in western China could be employed to support operations from Tibet against India through flanking attacks through Myanmar or reinforce an offensive from the north.

The nature of these military assets is undergoing fundamental changes as a consequence of the on-going military modernisation programme. They are improving their firepower, communications and mobility. Reports from Western sources suggest that “In addition, China’s western armies received . . . the newest and most advanced arms and equipment.”9

To support its military strategy, China has built a network of intelligence-gathering stations along the southern edge of the Tibetan plateau to effectively monitor Indian air space, electronic communications and troop movements.10

The 14 major air bases it has constructed on the Tibetan Plateau, along with innumerable satellite airstrips, provides the PLA air force the potential to dominate the airspace over Tibet and gives it a capability, for the first time, to execute combat operations over Indian Himalayas. The defence minister stated in Parliament on 6 March 2011, “PLA is also rapidly upgrading several other airstrips in TAR as well as south China to add to five air bases from where Chinese Sukhoi -27UBK and Sukhoi- 30 MKK fighters have practiced operations in recent times.”11

Given its acquisition of mid-air refuelling capabilities and the increased runway lengths of upgraded air bases, China is fast increasing its prospects to prosecute deep penetration air attacks against major Indian cities in the hinterland.12

The second leg of the Chinese strategy to prevail against India is directed to gaining military linkages and economic influence amongst India’s South Asian neighbours.13

Myanmar, which was recognised by both the British and the Japanese as “the back door to India,” has in the past three decades been targeted by China to steadily increase its political, military and economic influence. It bought its way into favour with the Myanmar’s military government by facilitating a peace agreement with the Communist Party of Burma, a particularly difficult secessionist group, selling it nearly $2 billion of arms, providing cheap consumer goods, rebuilding strategic surface communications and upgrading port facilities to enhance maritime activities – a strategy that has given it considerable strategic leverage, including a hinterland to the Indian Ocean from where it can prosecute its seaward strategy. This strategy encountered some hiccups in the “Golden Triangle” astride the border with Yunan Province in 2009 when the Junta Government perceived that the Chinese were using ethnic armies as pawns to hedge their bets.14

To support its military strategy, China has built a network of intelligence-gathering stations along the southern edge of the Tibetan plateau to effectively monitor Indian air space, electronic communications and troop movements.

The pincer movement to isolate India from South Asian militaries is completed by the massive arms supplies to Pakistan and assistance of technological, material and human resources to enhance its fledgling defence industrial establishment.

The PLA navy is directly responsible for the strategy for creating naval bases at Munaung, Hainggyi, Katan Islands, Coco Islands, Mergui and Zadaikey Islands, along Myanmar’s coastline;16 provisioning Pakistan’s navy with ship-borne cruise missiles [type 802] and LY60N surface-tosurface missiles17; the creation and management of China’s subsurface strategic nuclear forces, which Admiral Zhang Liaozhong defined as “the chief objective of this century”; and, finally preparing the PLAN to emerge into the Indian Ocean armed with aircraft carriers and a new generation of nuclear-powered submarines by 2000.18 China has already developed and launched both these platforms in keeping with General Xu Guangyu’s conception. The first aircraft carrier, Liaoning (Varyag), was commissioned into the PLAN on 25 September 2012,19 having a capacity for 30 J-15 fighter planes.20 “But Beijing will need at least three to six more ‘proper’ aircraft carriers, while the navy’s importance within China’s forces as a whole needs to be considerably enhanced.”21

“The Pentagon report said another carrier, one made from components made in China, may already be under construction and ready to sail in 2015.22 The congressional study goes on to state that China has also launched three nuclear submarines of its own design that are capable of firing nuclear-armed intercontinental missiles.23

Yet another area that needs the careful attention of the Indian government is that of China’s extant and emerging nuclear strategic and tactical capabilities that have major implications for the Sino-Indian equation and the latter’s long-term security interests.

Not only is China a long-established NWS with a carefully thoughtout nuclear strategy, but it continues to make significant increments in its nuclear weapons arsenal, is creating a subsurface nuclear [SSBN] capability that gives it the potential to deploy nuclear weapons in the Indian Ocean, has tested and produced tactical nuclear weapons, has introduced a nuclear war fighting doctrine in the PLA for use against qualitatively superior conventional forces, has demonstrated ominous trends by integrating missile warfare with nuclear and conventional capabilities into its concept of war,24 and has a no-first-use strategy directed towards non-nuclearweapon states (NNWS) party to the NPT, thus excluding India from this dubious assurance.25

There is sufficient evidence to indicate that China has at least 25 nuclear-tipped medium-range ballistic missiles based in Tibet, along with an undisclosed number of nuclear-configured short-range tactical missiles. These deployments are singularly India-specific as they have the range to strike major Indian cities or engage military formations in the Himalayas.