The Assassination of Rajiv Gandhi 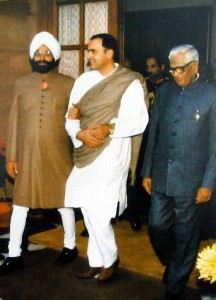 Once Rajiv Gandhi ceased to be the Prime Minister after his party lost the elections in November, 1989, and became the Leader of the Opposition, he was no longer entitled to protection by the SPG. However, he continued to be the most threatened political leader of the country and the threat to his security was much higher than that to even V.P.Singh, the new Prime Minister. Even though Rajiv Gandhi himself, who was a proud man, never raised the issue of his security, his party was greatly concerned over it and repeatedly took it up with the PMO and the Cabinet Secretary as well as with V.P.Singh himself.

The Government made the pretense of doing everything necessary and possible for the protection of Rajiv Gandhi—keeping in view the suggestions of the Congress (I)— without taking the one step that would have assured his protection—–namely, amending the SPG Act to make the SPG responsible for the protection of past Prime Ministers too. Congress (I) would have definitely supported such an amendment. For reasons, which were not clear to me, the V.P.Singh Government avoided doing this.

The SPG Act was amended after the assassination of Rajiv Gandhi to make the SPG responsible for the protection of all past Prime Ministers too and their families. Had this been done before his assassination, this great tragedy could have been averted.

It was my view that even if there was any political difficulty in having the SPG Act amended, ways could be found to continue to extend the SPG protection to him through an executive decision of the Prime Minister. The only problem that would have arisen was with the Finance, which might not have approved the expenditure incurred on his protection by the SPG since he was legally not entitled to it.

At every stage, attempts were made to embarrass Rajiv Gandhi and the Congress (I). When his party urged that the SPG protection be extended to him, it was told that while this would not be possible, the Government could transfer to the Delhi Police SPG officers in whom he had personal confidence so that they could continue to provide close-proximity protection to him. The whole thing was mischievously made to appear by the V.P.Singh Government as a question of personal loyalty to Rajiv Gandhi and not of institutional competence. The Congress (I) wanted SPG protection for Rajiv Gandhi not because he liked some SPG officers, but because it had better expertise and competence than the Police.

Since he was no longer entitled to the use of Government aircraft, he started traveling by the flights of the Indian Airlines, but attempts were made to deny him even the courtesy of traveling upto the tarmac in his car and directly getting into the aircraft. At the meetings of the co-ordination committee, which I used to attend on behalf of the R&AW, the requests and concerns of the Congress (I) regarding his security were treated more with sarcasm than seriousness.

Surprisingly, matters were not set right when Chandra Shekhar succeeded V.P.Singh as the Prime Minister. He was dependent on the parliamentary support of the Congress (I) for remaining in office and would have done whatever the Congress (I) wanted him to do. But, the Congress (I) did not raise with him the question of the inadequacy of the security provided to Rajiv Gandhi with the same persistence with which it took up the issue with V.P.Singh.

The intelligence agencies knew that Rajiv Gandhi was top on the hit list of the Khalistani terrorists. Even when Rajiv Gandhi was the Prime Minister, the R&AW had drawn attention to the likelihood of a threat to his security from the Sri Lankan Tamil extremist organizations. It repeated this warning after he became the Leader of the Opposition. These warnings did not receive the attention they deserved because they were based on assessments and not on specific intelligence.

…the code-breakers of the R&AW indicated that the LTTE’s communications security was poor. If it was poor after the assassination, it was most likely that it was poor before it too.

When there is such an assessment indicating the likelihood of a threat to a VVIP, the intelligence agencies are expected to initiate specific operations through their sources and through technical means to look for concrete indicators of such a threat. No such action was taken because everybody presumed- disastrously as it turned out— that, while the LTTE and other Sri Lankan Tamil organizations might indulge in acts of terrorism against each other in Indian territory, they would not indulge in acts of terrorism against any Indian leader.

The only human intelligence report of some relevance came from the German intelligence a few months before the assassination stating that a Sri Lankan Tamil living in Germany had been visiting Chennai and that he was reputed to be an expert in explosives.

Unfortunately, this was not properly enquired into by the IB. They maintained that their enquiries did not indicate that he was an explosives expert. The entire focus of the intelligence coverage of the LTTE was on its activities in Sri Lanka, its gun-running etc. There was no specific focus on likely threats to Rajiv Gandhi’s security from it.

After the assassination, the Monitoring Division of the R&AW, energized by Subbiah, did outstanding work in tracking down the movements of those involved in the conspiracy to kill Rajiv Gandhi on an hour-to-hour basis, but the Monitoring Division too had failed to detect the conspiracy to kill Rajiv Gandhi before the tragedy took place.

After my retirement, while I was going through the report of the Jain Commission, it was evident that the IB had better interception capability with regard to the LTTE than the R&AW, which had a better code-breaking capability than the IB. The two would not tell each other of their respective capabilities and would not pool their capabilities to produce results. It was evident from the incident of clandestine air-dropping of arms and ammunition by an unidentified organization at Purulia in 1995 and from the Kargil military conflict with Pakistan in 1999 that the intelligence agencies continue to keep each other in the dark about their respective capabilities and avoid pooling them.

In the case of the Purulia air-drop by unidentified elements, the R&AW did not tell the IB that the information about the planned air-drop came from the MI-5, which, in turn, got it from the pilot of the plane hired by the extremists. He was a retired pilot of the British Air Force and had reportedly alerted the MI-5 through the British Defence Ministry the moment the extremists tried to hire him as a pilot.The R&AW could have shared all the details with the IB and the two could have mounted a joint operation in collaboration with the pilot to lay a trap on the ground. This was apparently not done.

In the case of the Kargil conflict, the moment the DIB reported about unusual happenings in Pakistan’s Northern Areas, the R&AW could have taken the initiative for proposing a joint operation by the Aviation Research Centre (ARC), the IB and the Directorate-General of Military Intelligence (DGMI) for an aerial surveillance of the areas indicated by the IB. This does not seem to have been done.Sharing of knowledge of each other’s capabilities—particularly in respect of intelligence collection— and joint or co-ordinated exploitation of these capabilities should be the norm if we have to avoid such surprises.

The LTTE succeeded in blowing up Rajiv Gandhi by taking advantage of the negligence and weak supervision of the IB and the Tamil Nadu Police. This would show that those responsible for physical security for our leaders had failed to learn the right lessons from the assassination of Indira Gandhi. The same casualness, the same lack of attention to detail, the same inadequate supervision, which cost Indira Gandhi her life, cost the life of her son too. Since 1947, no other Prime Minister had taken more interest in improving our intelligence and security agencies and done more to improve their conditions of service than Indira Gandhi and Rajiv Gandhi.

What a shocking tragedy that these agencies, which owed them so much, so miserably failed to protect them. Every officer, who had served in our agencies at that time—-in whatever capacity—- should hang his or her head in shame. We failed them.

After the assassination of Rajiv Gandhi, Chandra Shekhar took up the stand that it was almost impossible to protect a VIP from suicide terrorists. This is totally wrong. It is very difficult to protect a soft target such as a shopping area or the crowd in a public place from a suicide terrorist or, for that matter, even from a terrorist, who does not indulge in suicide terrorism. But a hard target such as a VVIP or a VIP can be protected from a suicide terrorist through effective ant-explosive check and access control. Rajiv Gandhi was killed because the IB and the Tamil Nadu Police had failed to ensure an effective anti-explosive check and access control.

It was reported that Justice J.S.Verma, who had enquired into the failures of the intelligence and security agencies, felt that the officers of these agencies, who testified before him, were not very forthcoming. While forwarding his report to the Government, he, therefore, suggested that the officers, who had anything to do with Rajiv Gandhi’s physical security, should hold an introspection session in order to identify their own deficiencies and take action to correct them.The IB convened such an introspection session.

All serving senior officers, who were responsible for the physical security of Rajiv Gandhi, and even those, who had retired after his assassination, attended it. I too.Nothing useful came of it. No one was prepared to admit that there were any deficiencies. I suggested that we should look into the way in which the report from the German intelligence about the visit of an LTTE sympathizer, reputed to be an explosive expert, to Chennai was verified before it was rejected.

My suggestion was not accepted by the IB officers. It turned out to be more a self-justification than an introspection session. Our intelligence and security agencies rarely admit their faults and deficiencies. That is why we keep moving from one tragedy to another, from one disaster to another.

3 thoughts on “The Assassination of Rajiv Gandhi”