The Archives of Leh 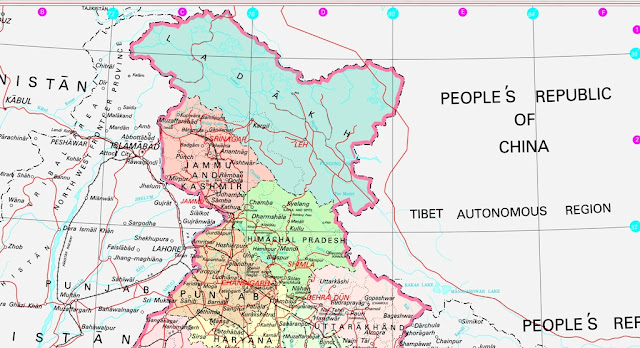 As an aftermath of the abrogation of Article 370 of the Indian Constitution, the former State of Jammu & Kashmir has been reorganised into the new Union Territories (UT) of Jammu and Kashmir and Ladakh. The latter consists of two districts: Kargil and Leh. Subsequently, new maps have been prepared by the Surveyor-General of India showing the geographical outline of the new UTs; it is a welcome move by the Government to educate the people of India and the media (and hopefully, the biased foreign Press).

Interestingly, the Leh district of Ladakh includes the districts of Gilgit, Gilgit Wazarat, Chilhas and Tribal Territory of 1947, in addition to the known areas of Leh and, of course, the Aksai Chin, illegally occupied by China since the mid-1950s.

For several reasons, it is important that these maps have been updated. First there was often a discrepancy in the length of the Indo-China border on some Indian websites. Was the length 4,056 or 3,488 km?  The first figure is the only valid one as Gilgit-Baltistan (formerly the Gilgit agency) is legally a part of India. The Indo-China boundary starts at the trijunction of Afghanistan, Gilgit-Baltistan and Xinjiang to reach the Karakoram Pass and further runs through the Karakoram and Karatagh passes and along the Kunlun in the north, and through Lanak La and across the western part of the Pangong Lake and then along the ridge parallel to the Indus, before crossing the Indus south-east of Demchok. Hopefully the wrong figures will now be rectified.

The fact that large parts of Ladakh are today occupied by China explain Beijing’s aggressive stance. Speaking of the creation of the two UTs, Geng Shuang, a spokesman of China’s Ministry of Foreign Affairs told the media: “China deplores and firmly opposes this. This is unlawful and void and this is not effective in any way and will not change the fact that the area is under Chinese actual control.” He urged India to “earnestly respect Chinese territorial sovereignty and uphold peace and tranquility in the border areas.”

The Indian Ministry of External Affairs did not leave the unwarranted attack unanswered: “We do not expect other countries, including China, to comment on matters that are internal to India, just as India refrains from commenting on the internal issues of other countries,” declared India’s Ministry for External Affairs spokesman. Referring to the Shaksgam Valley, he pointed out that China “illegally” acquired Indian territories from Pakistan-occupied-Kashmir through the 1963 China-Pakistan Boundary Agreement. That infamous pact was signed by Pakistan’s Minister of External Affairs and his Chinese counterpart. The new maps will irritate China no end, as it virtually opens another sector along the Indo-Chinese disputed boundary. 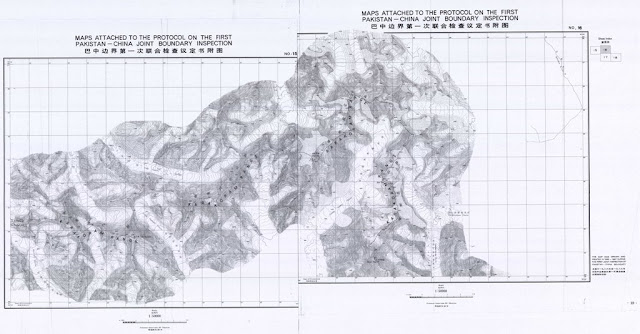 A secret note prepared by the historical division of the Ministry of External Affairs mentioned that “any such agreement will be ab initio illegal and invalid and will not bind India in any respect.” The note observed that the preamble states that the parties have agreed to formally delimit and demarcate the boundary between Xinjiang and the contiguous areas of Pakistan, the defence of which was under  the actual control of Karachi; Pakistan based its right on the fact that these areas were under her “actual control.” However,  the Indian note explained: “Under international law, the right of entering into treaties and agreements is an attribute of sovereignty. Furthermore, a sovereign cannot presume to exercise sovereign functions in respect of territory other than its own. Having regard to the UN resolutions of January 17, 1948, August 13, 1948 and January 5, 1949 (UNCIP Resolutions) it is clear that Pakistan cannot (and does not) claim to exercise sovereignty in respect of Jammu and Kashmir.”

Very few, even in India, realise the importance of this point. On March 5, 1963, speaking about China during a Calling Attention Motion in the Lok Sabha, the Prime Minister said: “In spite of its professions that it has never involved itself in the dispute over Kashmir or its absurd claim that the boundary negotiations have promoted friendship between the Chinese and Pakistani people and are in the interests of Asia and world peace, it is directly interfering in Indo-Pakistan relations. By doing this, China is seeking to exploit differences between India and Pakistan on the Kashmir question to further its own expansionist policy.”

Of course, since then, China has become Pakistan’s Iron brother, but the motivations have remained the same. Today’s publication of proper maps should only be a first step.

The logical follow-up should be to repatriate all the archives pertaining to Ladakh and the Gilgit Wazarat, to Leh, where a place should be dedicated to their preservation; it is crucial as the history of large chunks of the border with China lies in these records.

During the negotiations of “the Officials of India and China” in 1960, the Indian side noted: “A systematic settlement of revenue for the whole of Ladakh up to the traditional alignment was made during the time of Mehta Mangal who was Wazir or Governor between 1860 and 1865; and this settlement was revised during the period of his successor Johnson (1870-1881) and Radha Kishen Kaul (1882). The lists of villages in both the Revenue Assessment Report of 1902 and the Settlement Report of 1908 mentioned 108 villages, including Tanktse, Demchok, Chushul and Minsar… The Preliminary Report of Ladakh Settlement of 1908 made clear that these areas were part of Ladakh.”

The Indian side submitted a large quantity of such documents. These records will show that India exercised control over the various frontier areas and collected revenues from the border villages till Independence.

These records should be kept in Leh; it should also include the history of the Gilgit Wazarat and other territories now shown under the Ladakh district and how Shaksgam Valley was illegally offered to Communist China.

This would greatly help the project of the Ministry of Defence to write the history of India’s borders, the project for which was recently announced: “The work will cover various aspects of borders, including tracing its making; making and unmaking and shifting of borders; role of security forces; role of borderland people encompassing their ethnicity, culture and socio-economic aspects of their lives.”

It is perhaps not too late to put the history of India in its proper perspective and undo the blunders committed in the 1950s and 1960s.

This article The Archives of Leh appeared in the Edit Page of The Pioneer.