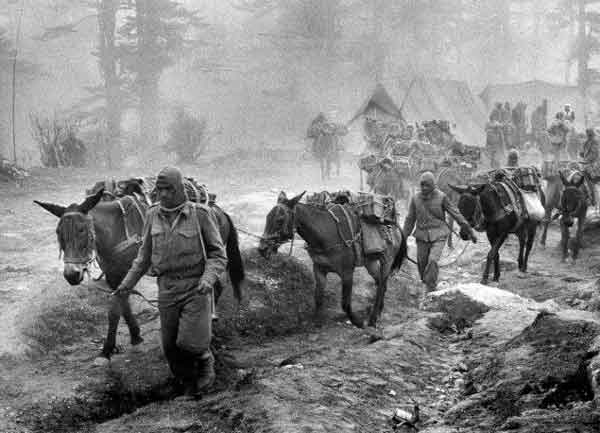 Mules carrying ammunition over a mountain pass during 1962 War

Here are some truths about the 1962 China’s War which are not often mentioned in history books or Reports from the Government.

1.  The precise location of the border

In the Army HQ in Delhi as well as locally in the NEFA, nobody was really sure where exactly the border (the famous McMahon Line) was. It is the reason why the famous Henderson-Brooks report has been kept out of the eyes of the Indian public for fifty years. Till the fateful day of October 20, 1962, the Army bosses in Delhi were unable to tell the local commanders where the border in Tawang sector precisely was?

Lt. Gen. Niranjan Prasad, GOC 4 Infantry Division wrote in his memoirs (The Fall of Towang):  “It is hard to understand how any purposeful negotiation could have been conducted with Communist China [in 1960] when even such elementary details as accurate maps were not produced; or, if they were in existence, they were certainly not made available to the Army, who had been given the responsibility for ensuring the security of the border.”

…when Lt. Gen. Kaul was evacuated from the Namkha chu on October 8, having fallen sick due to the altitude, he was carried pick-a-back by ‘local’ porters. It was later discovered that one of them was a Chinese interpreter in a PoW camp in Tibet. The secrets were out!

The Army had no map.

There is the story of Capt. H.S. Talwar of the elite 17 Parachute Field Regiment who was asked to reinforce Tsangle, an advance post, north of the Namkha chu on October 16. Without map, he and his men roamed around for 2 days in the snow; they finally landed a few kilometers east at a 2 Rajputs camp (and were eventually taken PoWs to Tibet with Brig. John Dalvi on October 21).

Take the example of the 2 Rajputs under the command of Lt. Col. Maha Singh Rikh who moved to the banks of the Namka chu river by October 10 as a part of 7 Infantry Brigade. The brigade was stretched out along nearly 20 kilometers front beside the river. It was a five-day march to walk from an end to the other (the confluence with the Namjiang chu). Not a single man from the Rajputs was awarded any gallantry medal, because there was no one left to write the citations; all the officers or JCOs who were not killed or seriously wounded were taken POWs. Out of 513 all ranks on the banks of the river, the 2 Rajput lost 282 men, 81 were wounded and captured, while 90 others were taken prisoners. Only 60 other ranks, mostly from the administrative elements got back.

Major B.K. Pant of 2 Rajput displayed exemplary heroism while wounded in the stomach and legs. Though his Company suffered heavy casualties, he continued to lead and inspire his men, exhorting them to fight till the last man. When the Chinese finally managed to kill him, his last words were “Men of the Rajput Regiment, you were born to die for your country. God has selected this small river for which you must die. Stand up and fight like true Rajputs.” Ditto for 4 Rajputs under Lt. Col. B. Avasthi in the Sela-Bomdila sector

The Indian troops fought pitches battles in the Walong sector of the NEFA and Chushul in Ladakh where the Chinese were inflicted heavy losses.

A flamboyant new Corps Commander, Lt. Gen. B.M. Kaul planned Operation Leghorn to ‘evict’ the Chinese by October 10. Kaul took over Corps IV, a Corps especially created ‘to throw the Chinese out’. On his arrival in Tezpur, Kaul addressed the senior officers: “The Prime Minister himself had ordered these posts [near the Thagla ridge] to be set up and he had based his decision on the highest Intelligence advice.” The ‘highest intelligence’ inputs from Mullik turned out to be a sad joke on the 7 Infantry Brigade.

Till the last fateful minute, the arrogant IB Chief, B.N. Mullick said the Chinese would not attack, they don’t have the capacity. Such a blunder!

Some war veterans recall that on the way to Bomdila, there was a dhaba manned by two beautiful ‘local’ girls. All officers and jawans would stop there, have a chai and chat with the girls. It turned out later that they were from the other side.

The Prime Minister himself, at Palam airport on his way to Colombo told the waiting journalists that he had ordered the Indian Army “to throw the Chinese out”. He generously left the time to the discretion of the Army. This was on October 12, 1962, just 8 days before the fateful day. He had received intelligence inputs from Mullik.

Just as today Beijing can hack into any computer system, in Mao’s days, the Chinese intelligence knew everything about Kaul’s and his acolytes’ plans.

The Chinese had infiltrated the area using different methods. In his memoirs, Prasad recalled: “From our own Signals channels I had received reports of a pirate radio operating somewhere in our area, but when we referred this to higher authorities the matter was dismissed: we were curtly told that there was no pirate radio transmitter on our side of the border. Subsequently it was confirmed that the Chinese had indeed sneaked in a pirate transmitter to Chacko (on the road to Bomdila) in the Tibetan labour camp. The aerial of their transmitter was concealed as a tall prayer-flagstaff so common in the Buddhist belt of the Himalayas.”

This is probably how Mao was aware of Operation Op Leghorn.

Some war veterans recall that on the way to Bomdila, there was a dhaba manned by two beautiful ‘local’ girls. All officers and jawans would stop there, have a chai and chat with the girls. It turned out later that they were from the other side.

An informant tells me that when Lt. Gen. Kaul was evacuated from the Namkha chu on October 8, having fallen sick due to the altitude, he was carried pick-a-back by ‘local’ porters. It was later discovered that one of them was a Chinese interpreter in a PoW camp in Tibet. The secrets were out!

The entire operation theater was plunged in deep chaos due to contradictory orders from the Army HQ (Lt. Gen. B.M Kaul, the Corps Commander was directing the Operation from his sick-bed in Delhi). Adhocism was the rule before, during and after the Operations.

To give an example, the GOC, 4 Division was not informed that Subedar Joginder Singh was awarded the Param Vir Chakra for some actions in Bumla (he later died of a gangrenous foot in a PoW camp in Tibet). The awards were decided by Delhi without consulting the local commanders.

Till the Chinese authorities sent the names of the prisoners to the Indian Red Cross, all those killed and taken prisoners were considered as ‘missing-in-action’ and their salaries were cut.

An officer who had run away was given the Maha Vir Chakra, the second highest gallantry award. The Government had distributed these lollipops to each regiment to show that everyone fought well.

7.  The Role of some Monpas

A senior war veteran, Maj. Gen. Tewari who spent nearly 7 months as a PoW in Tibet wrote: “In Kameng Frontier Division (Tawang) itself, they had many local people on their pay roll. They had detailed maps and knowledge of the area, how otherwise can you explain that they were able to build 30 km of road between Bumla and Tawang in less than 2 weeks?”

According to local Monpas only a few villages sided with  the Chinese under duress (after all they were ‘chinky’ like us, said the Chinese). Tewari recalled: “I was in for a still bigger shock when it was discovered that almost all the secondary batteries had arrived without any acid. I presume that what had happened is that the porters must have found it lighter without liquid and they probably decided to lighten their loads by emptying out the acid from all the batteries.”

It was an indirect collaboration with China, though the majority of the Monpas were rather patriotic.

About 500 Indian jawans and officers were taken prisoner in the Tawang sector alone. As Brig. A.J.S. Behl says in his interview: “My family got two telegrams: ‘2nd Lt Behl missing, believed dead’.”

Till the Chinese authorities sent the names of the prisoners to the Indian Red Cross, all those killed and taken prisoners were considered as ‘missing-in-action’ and their salaries were cut.  For no fault of theirs, their wives and families had to manage on their own.

In early 1962, Mao was out of power due to the utter failure of his Great Leap Forward. Some 45 million Chinese had died after a 3-year man-made famine. Mao Zedong managed to come back on the political scene in September 1962. If he had not managed to return at that time, the war with India would have probably not taken place. Of course, with ‘if’ many sections of world history could be rewritten, but it is a fact that once Mao’s ideological hard-line prevailed in Beijing, it was difficult to avoid a clash.

Averell Harriman, the US Assistant Secretary of State and Duncan Sandys, the British Secretary for Commonwealth Relations visited India on November 22, 1962. This was the day China declared a unilateral ceasefire in the war with India. The visit was supposedly to assess India’s needs to resist Communist China; but both envoys “made clear their governments’ willingness to provide military assistance to India but pointed out the related need for negotiations to resolve the Kashmir dispute.” 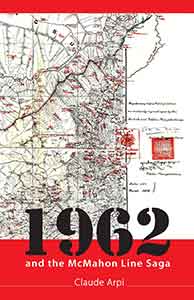 A clear signal was given to India who had hardly recovered from the blackest month of her history: she had to compromise on Kashmir.

Consequently six rounds of talks between India and Pakistan were held to find a solution for the vexed issue, but to no avail. However, Ayub Khan, the Pakistani President, must have taken the Western intervention as an encouragement for his claim.

The Kennedy and later the Johnson Administrations thought of ‘re-balancing’ the assistance to Pakistan, with the condition that India should accept to ‘settle’ the Kashmir issue.