Tejas Induction: A Boost to the Indian Aeronautical Technology 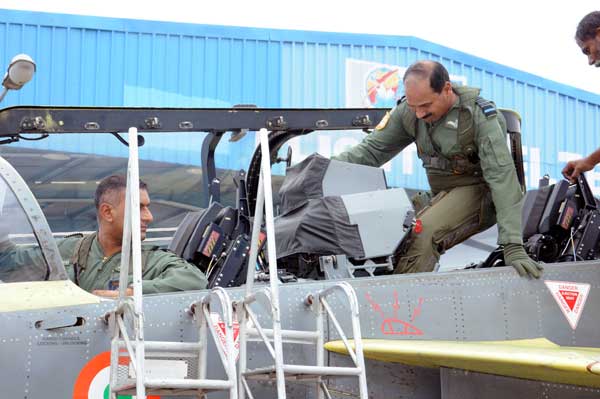 In what has been described as a shot in the arm for the Indian aeronautical technology, the fourth generation, home grown supersonic fighter, Tejas Light Combat Aircraft (LCA), that was once written off  by critics, was inducted into the Indian Air Force (IAF) at an impressive ceremony held in Bengaluru on July 1. For the Indian aerospace industry, which had actively contributed to the development of this domestically built combat aircraft, the handing over of the two Tejas fighters to IAF, implied a growing maturity in terms of meeting the exacting needs and stringent specifications of the exercise involved in building this state of the art fighter. For the Indian Air Force (IAF), saddled with the problem of squadron depletion, the induction of Tejas marked the beginning of a process aimed at strengthening its frontline fighting formations.

For the Indian Air Force (IAF), saddled with the problem of squadron depletion, the induction of Tejas marked the beginning of a process aimed at strengthening its frontline fighting formations.

Tejas, which was taken up for development  in 1980s as a replacement to the ageing Mig-21 fleet of  around 250 fighters, is configured to meet the tactical needs of the IAF and help sustain its fighting punch. Indian Defence Minister, Manohar Parrikar, has been quick to point out that Tejas is far more superior to Mig-21.

The induction of two Tejas into IAF marks a major first step towards raising the first squadron of this combat aircraft named Flying Daggers 45. “The induction of two aircraft is a big milestone for IAF. After this, things will move at a rapid pace,” stated Air Marshal Jasbir Walia, Air Officer Commanding-in-Chief, Southern Air Command of IAF.

Tejas, meaning ‘radiant’ in the Indian classical language of Sanskrit, is a single engine, single seat, multi role fighter aircraft with supersonic capabilities at all altitudes. Tejas, which  made its debut flight in  January  2001,  received its first Initial Operational Clearance (IOC) in January 2011 followed  by a second IOC in Dec.2013.The Final Operational Clearance (FOC) of the fighter is expected sometime next year. Also under development are the trainer and naval versions of this indigenous combat aircraft. Tejas is claimed to be better in performance in comparison to JF-17 fighter jet, jointly developed and built by China and Pakistan.

The high point of Tejas is that it has successfully accomplished around 3,200 flights, testifying it as a reliable fighter and that too without a single mishap or accident. As rightly pointed out by Dr S Christopher, Chief of  Defence Research and Development Organisation (DRDO), whose Bengaluru based Aeronautical Development Agency (ADA), spearheaded the development of this fighter virtually from scratch, Team Tejas is proud that an idea in the late 1980s, is today turning into a reality of having our own fighter aircraft. India’s state owned aeronautical major, Hindustan Aeronautical Limited (HAL), the production agency of the fighter, has on hand, a firm order from IAF for 20 Mark 1 version of the fighter aircraft. HAL Chairman and Managing Director, T Suvarna Raju, has revealed that HAL expects an order for 100 LCA Tejas MK1A, an improved version of LCA MKI. The MKIA configuration incorporates enhanced capabilities in terms of combat features, AESA (Active Electronically Scanned Array) radar, air to air refuelling, self protection jammers along with better maintainability features.

Due to its small size and extensive use of carbon composites, the fighter has a small radar cross section making it difficult to detect.

Indeed, right from the word go, obstacles and difficulties had dogged the saga of developing this tactical fighter. Fighting against heavy odds including fund crunch, poor industrial base, lack of legacy in developing a state of the art combat aircraft and the sanctions that came in the aftermath of 1998 Pokhran nuclear blast, the Tejas development programme was able to assume wings with many of the critical technologies developed domestically to beat the restrictions on imports imposed on by MTCR (Missile Technology Control Regime). In pleasant turn of events, India has today become a member of MTCR.

This indigenous fighter features a quadruplex digital fly by wire flight control system for its smooth and easy handling. Due to its small size and extensive use of carbon composites, the fighter has a small radar cross section making it difficult to detect. All said and done, Tejas cannot be a substitute for a medium, multi role combat aircraft like Rafale which India is planning to acquire. The delta winged, twin engine Rafale was one of the contenders for the multi billion dollar MMRCA (Medium, Multi Role Combat Aircraft) tender.

Tejas, claimed to be the world’s smallest, light weight fighter in its class with an aerodynamically unstable, tailless, compound delta winged configuration is specifically optimised for manoeuvrability and agility. Parrikar, has stated that Tejas meets the critical light weight fighter requirements of the IAF and will be available for export to friendly nations. Giving details, Parrikar drove home the point that Tejas features a glass cockpit and state of the art satellite aided inertial navigation system, digital computer based attack system, air to air missiles, stand-off air to ground weapons, precision guided munitions and a fly by wire control system.

The three decades old Kaveri engine programme was kept in limbo after it could just reach a stage at which it could generate a thrust of 72-kN against 90-kN thrust required to propel Tejas.

In the ultimate analysis, one should look beyond the just cost factor while evaluating the home grown defence projects of national and strategic importance. The expertise acquired during the development of Tejas could prove invaluable for the realization of advanced aeronautical projects in the country. More importantly, the strategic significance of a home grown combat aircraft like Tejas lies in the fact that India would not have to worry about the threat of sanctions associated with the US origin fighting equipment and cost escalation, poor performance and delay in the supply of spares associated with the defence hardware imported from Russia. Moreover, the imported defence hardware are phenomenally costly in comparison to the home grown fighting equipment.

In a development of significance, HAL is busy augmenting its production capability with a view to help IAF bolster its strength of Tejas fleet in a time bound manner.  “We have established a new division specifically for manufacture of LCA-Tejas with a state of the art production facilities in Bengaluru. The production facilities are being augmented to produce 16 aircraft against the current capacity of eight aircraft per year,” said Suvarna Raju. Meanwhile, there are reports to suggest that  as part of the deal to acquire 36 Rafale—the negotiations for which are  said to be in final stages–France has offered to help India revive its Kaveri engine which was originally taken up for development to propel Tejas. The three decades old Kaveri engine programme was kept in limbo after it could just reach a stage at which it could generate a thrust of 72-kN against 90-kN thrust required to propel Tejas.

The idea is that by chipping in the French expertise and knowhow, it would be possible to carry forward  the development of Kaveri engine to help it attain the originally envisaged thrust level. An earlier attempt by DRDO to rope in a French engine major for the co-development of the engine with the latest genre technologies cold not fructify. Failure of the Bengaluru based Gas Turbine Research Establishment (GTRE) to deliver the Kaveri engine with the  originally envisaged thrust level  resulted in the import of 41 US made F-404 GE-IN20engines for Tejas Mark 1 and 99 GE F-414 INS6 engines for Tejas Mark 11.

With the ambitious MMRCA tender that envisaged the acquisition of 126 medium, multi role fighters getting diluted to the one time, outright acquisition of 36 Rafale fighters from French aeronautical enterprise Dassault Aviation, IAF is now left out with no other option but to fall back on Tejas on a large scale. Parrikar is keen that IAF inducts Tejas in sufficiently large numbers to boost the prospects of the Make in India flagship programme of the Prime Minister Narendra Modi.

There was a whisper campaign supported by the import lobby to ground this project. But then Tejas proved critics wrong and came out in flying colours successfully…

HAL, which was for a long time at the receiving end of IAF, for cost escalation, time overrun and deficiencies in fighting equipment is planning to involve the private Indian industry in a big way  to boost the production programme of Tejas. At the end of the day, the strategy of HAL is to strengthen its existing capacity to increase production to speed up the delivery schedule of Tejas “We are trying to get the modules of LCA Tejas done by the private industry. We have already sent RFI (Request for Information) to the industry interested in taking up the job” said Suvarna Raju.

Tejas development programme had come under criticism for cost escalation, time slippage and operational drawbacks. And indeed, there was a whisper campaign supported by the import lobby to ground this project. But then Tejas proved critics wrong and came out in flying colours successfully demonstrating its flying qualities and fighting punch. It may not be a dream fighter but it has sufficient built in robustness to meet some of the needs of IAF admirably well.

The Advanced Medium Combat Aircraft (AMCA) that would be developed as a follow on to Tejas LCA by ADA will be a single seat, twin engine air superiority fighter with multi role capability, stealth features and the latest genre integrated condition monitoring system. This super manoeuvrable, all weather combat aircraft is well equipped for performing a variety of roles including ground attack, bombing and intercepting and it is planned to develop a naval version of this fighter aircraft.  AMCA with a likely weight of close to 20-tonne is expected to carry two upgraded Kaveri engines. Of course, the thrust of Kaveri gas turbine engine would need to be boosted to 110-kN wet and 75-kN dry thrust to help it propel AMCA.