TAPI Pipeline: Moving away from Iran 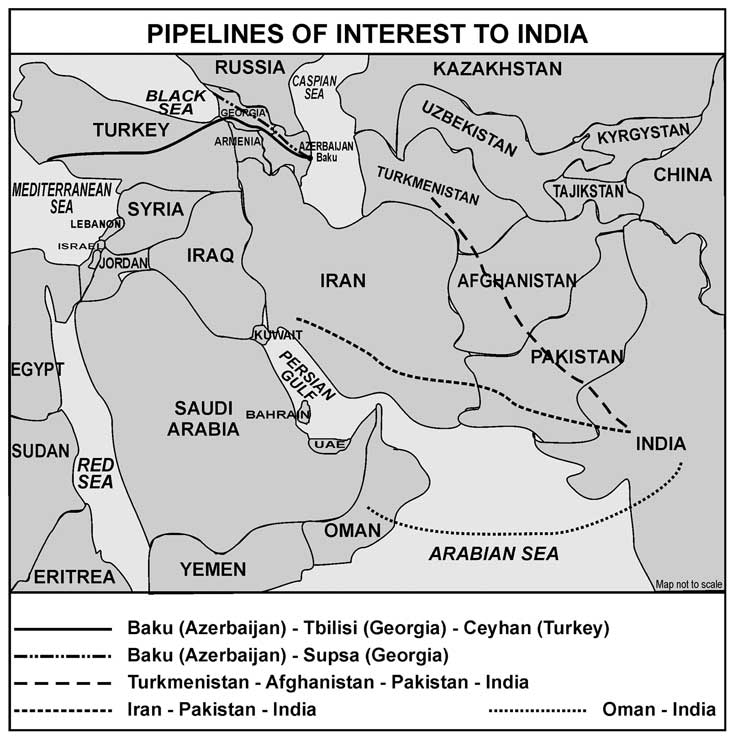 The Turkmenistan-Afghanistan-Pakistan-India (TAPI) pipeline agreement signed on May 23 is a follow-up to the December 2010 agreement but essentially a rerun of the aborted 1990s game with a few players changed and a few goal posts moved. Then, as now, Pakistan was impoverished and the US hopes that the pipeline will help it revive its fortunes. Then, as now, the US was dealing with the Taliban to arrive at a different kind of an arrangement. Reacting quickly to the TAPI pipeline deal, the US State Department gave its approval the same day, saying this was a welcome step towards energy diversification (meaning away from Iran).

On paper the project looks attractive as it promises economic bounty from Turkmenistan to Bangladesh. However, even a cursory look at the map shows how unreal this 1,800 km pipeline worth $10-12 billion…

There were conflicting interests of different States in the region in the 1990s. Father Communism had died in Moscow and the children had been orphaned in the resource five ‘stans’ of Central Asia. Enter Uncle Sam with his goodies and ideas to wean away these orphans from the old Soviet Union. The great game in the inhospitable terrain of Central Asia was about to begin — the prize being geopolitical power.

American energy firm Unocal and Argentine energy firm Bridas were in it for the profit. The Soviet Union was dead but Russia must not be allowed to live so the Americans were in it for keeping control on energy sources and Russia out of the vital energy region. Pakistan’s Prime Minister Benazir Bhutto in her second term was looking for routes to and from Central Asia that would make her country the gateway and pivot and additionally take her country out of penury. The Pakistan Army, a law unto itself, was seeking control of Afghanistan for ‘strategic’ depth against enemy India.

It was left to the intelligence agencies once again to operationalise this agenda. The Inter-Services Intelligence (ISI) had its own plans to control Afghanistan with Pakistani troops backing the Taliban. The Central Intelligence Agency (CIA) was helping the great American cause of controlling the gas from Turkmenistan and other American interests. The Saudis, keen to Wahabbise Afghanistan, pitched in with the secretive intelligence chief, Turki bin Faisal, and his money for the Taliban. Iran, Russia and India were to be kept on the margins of this great game of modern buzkashi.

We are now being led away not only from Iranian oil and gas but also from Iran itself.

Assistant Secretary of State, Robin Raphel, who represented US interests, while visiting Kabul, said, “The US government now hopes that peace will facilitate US business interests.” Later in Islamabad, she pronounced that the Unocal pipeline “will be very good for Turkmenistan, for Pakistan and for Afghanistan.”

The US was ready at one stage to strike a deal with the Taliban, whose representatives had been feted in Texas, but for other reasons it collapsed. The Taliban shot themselves in the foot with their bestiality towards women and non-believers and pushed the Clinton administration into an embarrassed silence. The subsequent cruise missile attacks in Afghanistan in 1998 shut out further possibilities.

We are now being led away not only from Iranian oil and gas but also from Iran itself. We have identified ourselves more closely to Saudi sources and into the Turkmen grid, which is theoretically, at a later date, meant to compensate for losses from Iran. However, by moving away from the Iran option we are making our access to Central Asia, wherMe China is already present in strength, that much more difficult. The US has pushed hard on the TAPI deal for its larger geo-strategic interests, although the Russians are not completely out of the game, Gazprom having shown interest in the consortium.

On paper the project looks attractive as it promises economic bounty from Turkmenistan to Bangladesh. However, even a cursory look at the map shows how unreal this 1,800 km pipeline worth $10-12 billion is, as it will cross the world’s most turbulent areas today — Afghanistan and Balochistan — where security will be provided by Afghan and Pakistani forces.

The Oman-India pipeline (the hub for Qatari, Turkmen and Iranian supplies) at $4 billion, being considered in 2010, through the Arabian Sea avoiding turbulent and even hostile areas, is probably history. Deepwater pipelines should remain the preferred option, as this assures cheaper gas from diversified and secure sources. Gas from TAPI is expected to cost thrice as much as from domestic sources and India will also pay indirect costs for the security of gas supplies to Afghanistan and Pakistan.

The US and Nato plan to pull out by 2014 and now the argument is that since this project is in the regional interest, these regional powers should also handle its security. There are serious doubts about claims that the Afghan forces are now ready to take on the burden. This claim is probably motivated by the need not to portray the impending departure as a retreat from an unwinnable situation.

The proposed pipeline goes through Kandahar, enters Balochistan, passes through Multan reaching India at Fazilka, Punjab. Given the nature of Pakistan-India relations one would have little confidence about the ability or even the intention of Pakistan to ensure uninterrupted supplies. How much or when Pakistan will plead inability to abide with agreements in the face of protests from elements of the devoutly anti-Indian organisations like the Difa-e-Pakistan Council, which oppose even trading with India, or prevaricate on some pretext, are legitimate concerns.

India’s massive dependency on imported energy will continue to grow. There will also be competing interests for sources and India cannot afford to have either/or solutions nor assume hopeful situations that are unlikely to occur. Projections built on manifestly false or unattainable hopes will not provide energy security.

One thought on “TAPI Pipeline: Moving away from Iran”