Home  >  Spotlights  > Geopolitics  >  Taliban is Islamabad’s Redline; Avoiding it and Relations with New Delhi will not be an Easy Task for the Taliban!

Taliban is Islamabad's Redline; Avoiding it and Relations with New Delhi will not be an Easy Task for the Taliban! 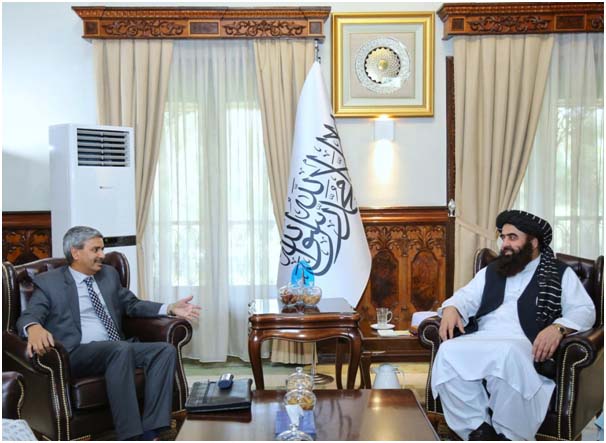 The India and Afghanistan Friendly Relations

Recently, the Government of India sent its Foreign Ministry representative for talks with the Taliban in Kabul. Whether there will be any fruitful outcome of these is to be seen.  Throughout the contemporary history of Afghanistan, India has always been the best example of a friendly country when it comes to Afghanistan.Regardless of governments with different ideologies coming to power in Afghanistan, India has always tried to maintain friendly relations with Afghanistan and its people.However, there is no clear news and analysis about the fate of these friendly relations after the extremist and oppressive Taliban group came to power in Afghanistan. It is hoped that connections and interactions with the Taliban group will not destroy the society, the people of Afghanistan, and India.

India on the Platform of the World Powers

The History of India’s presence in Afghanistan

The policy of the Indian government made it strengthen relations with its neighbors through diplomacy. Although its historical enmity with Pakistan seems to be a major obstacle to this solution, it wants a mutual and good relationship even with Pakistan as well.With the collapse of the Eastern Bloc, the former Soviet Union, and the disintegration of the Russian-backed government in Afghanistan in the 1990s, the Indian government decided to strengthen its relationship with Afghanistan.During the five years of Mujahidin rule over Afghanistan, this relationship was progressing well. But the terrorist ruling and attacks of the Taliban in Afghanistan in 2001 and before it ended India’s influence on this country.

After the September 11, 2001 incident and the establishment of a so-called democratic and republican government in Afghanistan, India again took steps toward greater cooperation with Afghanistan. In the past 20 years, this relationship has been at its warmest.But the re-establishment of Taliban rule over Afghanistan once again raised the doubt that India will lose its influence in Afghanistan again. Now it seems the Indian government does not want to repeat the experience of the second half of the 1990s and cut ties with Afghanistan because of the Taliban.

Indian Delegation Presence in Kabul with Taliban Officials on June 2, 2022

The presence of a delegation of Indian diplomats in Afghanistan, who arrived in Kabul on June 2, 2022, led by JP Singh, the Joint Secretary of the Indian Ministry of Foreign Affairs for Afghanistan, Iran, and Pakistan, indicates India’s return to an active policy towards Afghanistan.During its two days in Kabul, the Indian delegation visited the places and centers that have been renovated or established in the last 20 years with the financial and economic support of the Indian government.Including the hospital named “Indira Gandhi’s Children Hospital,” which was built in the 70s in Kabul during these years, India has been its financial sponsor.The Indian delegation also had a female diplomat with them on that trip. According to them, the correct treatment of the Taliban and their non-protest showed that they also want constructive interaction with the world’s countries, especially with the Indian government.However, regional analysts, experts, and especially the majority of Afghan people do not consider any relationship and interaction with the extremist Taliban group, which is regarded as an extremist and proxy project, to be a good omen.

Injustice in Humanitarian Aids by the Taliban

Regarding regional geopolitics, the Indian government desperately needs closer interaction with Afghanistan’s geography under the Taliban’s control. This country needs Afghanistan to reach Central Asia because the competition between China and India in the region and border tensions have reduced the possibility that India can reach Central Asia through China. Therefore, Afghanistan is a better option for India to reach Central Asia.Since the Taliban has still not succeeded in gaining legitimacy from the western countries, the violence against women and girls and the crimes of this group against human values in Afghanistan have led to further distance from the western countries and especially the international community. Although the Indian government still has not recognized the regime of the Taliban group in Afghanistan. But, in one last year since the Taliban rule in Afghanistan, India sent much aid to the people of Afghanistan, and the Taliban embezzled this humanitarian aid due to observers’ lack of serious supervision. So far, India has provided 20,000 tons of wheat, 13 tons of medicine, and 500,000 doses of the Covid-19 vaccine to Afghanistan.

What are the Sensitivities of Islamabad in this Matter?

Now, due to the stagnation of the dangerous economic crisis that has engulfed Afghanistan, the Taliban will show more interest in the financial options provided by the neighboring countries.But, what is important and debatable in this context is Islamabad’s approach and sensitivity towards Taliban-India relations. The most important reason for Pakistan to support the Taliban, even at the cost of losing its prestige and flattery in the eyes of the western countries, is to prevent Afghanistan from becoming a launch pad for India toward the Pakistani regime.But the undeniable fact is that the Taliban group has been a puppet and trained by Pakistan for a long time and will never be separated from Pakistan intellectually, ideologically, and religiously. This group will always be under the domination of Pakistan and Islamabad for generations.

Taliban is a Destructive and Trusted Group of Islamabad Regime

Nevertheless, Pakistan has always wanted to destroy and control this relationship through proxy groups under the control of Pakistan by strengthening pessimistic and destructive policies to the close relationship between Afghanistan and India.Meanwhile, the Taliban group is one of Islamabad’s trusted and destructive proxy groups against India and the peace of the Afghanistan people. Now that the Taliban has gained power in Afghanistan and is listening to Pakistan’s commands, this country will not allow India to establish a strong and trustworthy relationship with the Taliban. The reactions and analyses to the visit of the Indian government delegation to Kabul on June 2, 2022, in the Pakistani media also clearly show Pakistan’s concern about the relations between India and the Taliban.

Taliban is the Redline of Islamabad

How can the Taliban group pass without Islamabad’s orders that the Taliban is a proxy red line for the Pakistan regime against India and Afghanistan? Therefore, crossing the red line of Islamabad will not be an easy task for the Taliban group that has invested in it for years.Pakistan claims that it has no problem with establishing India-Afghanistan relations, provided that the interests of Pakistan are not weakened, and the challenge arises from here.In an article published on June 6, 2022, Tribune Express quoted the spokesperson of Pakistan’s Ministry of Foreign Affairs as saying that Pakistan’s view on India’s role in Afghanistan is clear, “We do not want anyone to play a negative role in our relations with Afghanistan. We want a prosperous, stable, and peaceful Afghanistan. You witnessed that we allowed wheat to be transported to Afghanistan through India. Finally, even families of Taliban officials live under “House Arresting” in Islamabad. Can the Taliban cross the red line of Pakistan and their families? And this is not an easy issue, and disobeying Pakistan will have a heavy price for the Taliban.