Home  >  Spotlights  > Geopolitics  >  Sub-continent in the grip of disquiet

Sub-continent in the grip of disquiet 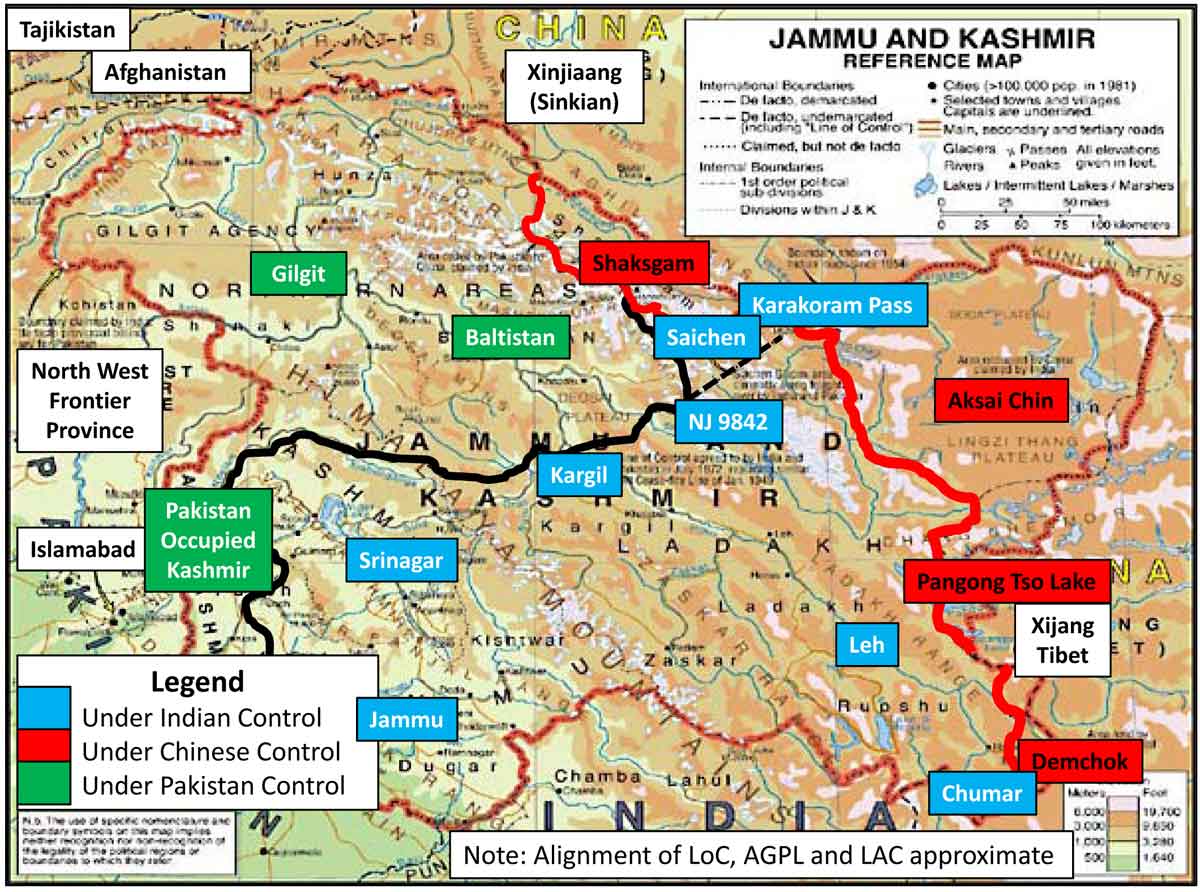 Three countries of the Indian sub-continent — India, Pakistan and Afghanistan —- are bogged with grim disquiet whoseroots lie in the exclusivist beliefs of the Islamic State of Pakistan. After actively stoking the embers of Theo-fascism for more than three decades, the deep State finds that at the end of the day the flames are engulfing it.

Kashmir, the proverbial jugular vein of Pakistani rhetoric has now turned into her Achilles heel. But that is of her choosingand no external manipulation. For quite some time Pakistani Prime Minister has been talking of third party mediation, a tantrum of peace in the region and bilateral talks with India.

Suddenly, Islamabad agreed to a ceasefire along the LoC in Jammu and Kashmir and the two DGsMO talked to each other on the hotline and agreed to restore the 2003 peace agreement from the 25th of February 2021 after the lapse of 18 years. Losses in terms of human resource on both sides are extremely painful. Lt Governor Manoj Sinha has met with the Defence Minister in New Delhi on 10 March and told him that there was no violation of the ceasefire agreement ever since agreed upon on 25 February. The border people all along the ceasefire line have heaved a sigh of relief that they can return to their homes and attend to crop cultivation in their fields without the fear of being shelled and fired at. Hopefully, the same will be true of the people on the other side.

The question very frequently asked in political and academic circles is what can be the compulsions for Pakistan to have agreed to a ceasefire so abruptly? Given the objectives and the strategy of the GHQ and its agencies, the development is somewhat bizarre and unexpected. It, therefore, merits a dispassionate analysis.

Currently, Pakistan is obliged to fight on numerous fronts, financial being the crucial one.   Distressed by escalating financial stringency and the burgeoning interest in loans borrowed from different sources, GHQ is eager to buy time to minimise the pressure. FATF will not let her off the hook and the Covid-19 is mercilessly devouring the limited resources.

Contrary to Pak’s expectations, President Biden hasn’t given any indication of disturbing the multi-faceted Indo-US cooperation process in which Indo-Pacific security arrangement remains a priority. Biden called the first summitof the Quad on 12 March and has spoken of “the importance that we (the US) place on close cooperation with our allies and partners in Indo-Pacific” wrote the Dawn of 12 March.

A few Democrat Congressmen whom Islamabad had cultivated to counterbalance pro-India lobbies have not proved effective in taking Pak irons out of the fire. Pakistan had some expectations that Washington would compliment her on what she considers a positive role in Afghanistan taking into view how Islamabad had successfully managed to bring the Afghan Taliban to the negotiating table in Doha. Islamabad’s disappointment is not only that the Biden administration has given cursory recognition to her self-styled “positive” role in Afghanistan but also it has dampened her resolve of fighting for the Kashmir cause indefinitely.

The cast-iron determination and stellar resolution with which India stood with an eyeball to eyeball stance against Chinese expansionist designs in the Eastern Ladakh, and finally a negotiated resolution of the issue that made the Chinese forcesdismantle their illegally raised camps and return to pre-conflict positions, has come to a big blow to Islamabad’s Kashmir Utopia. It has opened their eyes to the military might of India. GHQ somehow began to believe in its lie that India was going to launch a blitzkrieg on PoK and Gilgit and Baltistan to redeem the pledge of the Indian That is why Pakistan had deployed missiles across its border with India.

Pakistan had raised the Kashmir mediation tantrum during the Trump administration. India had rejected it outright. Pakistan’s hope that Biden might reopen the subject and bring pressure on India has proved a damp squib. Rather the entire Kashmir narrative has taken a different direction. Moeed Yusuf, PM Imran Khan’s Security Advisor has been pressing into service his Washington clout for the resolution of the Kashmir tangle. He had visited India in 20015 and was reported to be silently carrying forward the Track II diplomacy. Knowledgeable circles believe that Yusuf expects Pakistani leadership and the deep state both to be realistic and forget the Utopia it has built around Kashmir. Breaking the protocol of international diplomacy, Yusuf asked the media person whether a ceasefire along the LoC could come from a vacuum. Precisely such big decisions do not fall from the sky, he had added. It has now trickled down the columns of print media that Moeed Yusuf and his Indian counterpart Ajit Dovalhad met in a third country and talked at length on Kashmir and Indo-Pak relations. They would not do so without remote consultations and guidance from home governments.

The cryptic remarks by Ned Price, the spokesman of the State Department, and also what Yusuf told a press reporter, sum up how the Biden administration aims at a comprehensive outreach to the Kashmir issue. To the US think tanks, Kashmir militancy and Afghan Taliban combat, both have roots in Pakistan’s jihadist ideology. The jihadist superstructure raised by Pakistan has become the main source of disruption of peace and normal life in the entire Indian Sub-continent. That is the reason why both Price the spokesman and  Moeed Yusuf the Security Advisor to the Pak Prime Minister stated in no ambiguous words that Pakistan has to put an end to cross-border infiltration, be it Afghanistan or Kashmir, and adhere to the universally accepted norms of good neighbourly relationship. It has also to be noted that both of them have hinted that after the ceasefire stabilizes, talks will be carried forward to address other aspects of the Kashmir issue so that a resolution to the satisfaction of the stakeholders is found.

Pakistan agreed to a ceasefire with definite purposes. The firstis to monitor whether this goodwill gesture (ceasefire) will have a salutary impact on the Democrats in Washington and ultimately on the Biden administration. The second is thatPakistan would like to play the double game with China. She accepted ceasefire only after the Sino-Indian logjam in Ladakh ended. By doing so, she would want to convey a message to China that Pakistan will have to rethink her dependence on China in the areas of military and strategic planning. What has prompted Islamabad to bring in the China element is what the grapevine says about India and China engaged in a behind -the -curtain dialogue aimed at reducing border tension and continue the dialogue for a lasting solution to the border dispute.  Ladakh episode has forced Pakistan to concede the futility of solving the Kashmir issue through muscle power. The immediate impact of the ceasefire in Kashmir will be twofold: the funding sources will dry up faster and so will the manpower that sustained insurgency in Kashmir all these years.

In the wide-ranging strategic scenario summarized above, the Pakistan army feels that a respite in firing and shelling along the LoC in J&K could become the prelude for its face-saving. At the same time, adhering to peace initiative in the sub-continent would convince Washington of Pakistan’s “honest” intentions about the return of peace in Afghanistan. Thus if Pakistan is the epicentre of unrest and turmoil in the Indian sub-continent, there is no better chance for her than the one in hand to reconstruct her relations with her neighbours on the east and the west, and through that process begin a new chapter of relationship with the western and the Islamic world. That is the way how disquiet Indian sub-continent will turn a new leaf in its contemporary history and become strategically crucial to intentional peace and tranquillity.