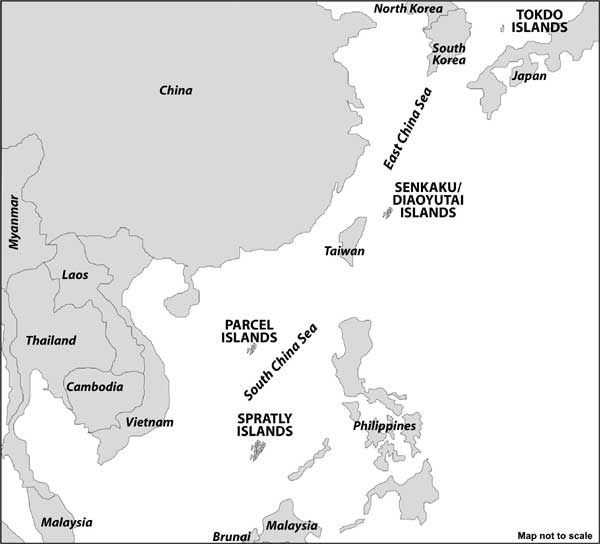 The South China Sea (SCS) dispute has become a key issue of concern for East Asian regional security. The nature of the conflict and lack of clarity on the issue owes much to the multiple overlapping claims of the concerned parties based on history, geographical proximity and principles of maritime law. China’s assertiveness has made the situation much worse and has also raised security concerns in the region. The issue is not limited to the question of maritime rights or resource control but also holds significance for regional security and cooperation, external intervention, and the application of international law.

China’s claims to the South China Sea are based on ‘historic rights’ backed by imperial maps of the Ming dynasty. As far back as 1958, China had promulgated the ‘Declaration on China’s Territorial Sea’, which listed the Dongsha Islands, Xisha Islands, Zhongsha Islands, and Nansha Islands as belonging to China.1

During the last two decades, China’s legislative proposals, economic activities, and maritime law enforcement attempts have substantiated its territorial and maritime claims in the South China Sea. Thus, the Law of the People’s Republic of China on the Exclusive Economic Zone and the Continental Shelf (1998) stated that “the provisions in this Law shall not affect the historic rights enjoyed by China.”2 In 2008, China Marine Surveillance began to conduct ‘regular maritime patrols’ in these waters. In 2009, China submitted a diplomatic note protesting against the counter claims made by Vietnam and Malaysia to the United Nations Commission on the Limits of the Continental Shelf, with a map of the SCS attached to it. 3

In 2011 China had also declared the SCS a ‘core interest’, only to make a ‘tactical retreat’ from this position in 2014. Interestingly, in July 2013, President Xi Jinping emphasised that China is preparing to cope with complexities, enhance the nation’s capacity in safeguarding maritime rights and interests, and resolutely safeguard the nation’s maritime rights and interests.4

The dispute has led to international arbitration between The Philippines and China. The former contends that the Chinese claim to the ‘nine dotted line’5 is invalid and ultra vires, as it violates the provisions of international maritime law as laid down in the United Nations Convention on the Law of the Sea (UNCLOS). According to The Philippines, the Chinese claim violates the agreement on ‘exclusive economic zones’ (which stretches from the baseline out to 200 nautical miles (nmi) from the coast) and ‘territorial seas’ (belt of coastal waters extending at most to 12 nmi) as per the provisions of international maritime law. According to Article 55 of UNCLOS provisions, “an exclusive zone is an area beyond and adjacent to the territorial sea, subject to the specific legal regime established,” while Articles 77 to 81 define the “rights of a country over its continental shelf,” which includes territorial seas.6 A coastal nation has control of all resources on or under its continental shelf, living or not, but no control over any living organisms above the shelf that are beyond its exclusive economic zone.

On 22 January 2013, the Philippines sent China a note verbale, attached with a notification, to initiate arbitration proceedings against China regarding issues of the South China Sea. On 19 February, China stated its rejection of the request for arbitration by the Philippines and returned the latter’s note verbale and the attached notification.7 Later, on the request of The Philippines and its unilateral submissions in July 2015, an Arbitration Tribunal was established and which held ‘oral hearings’ in the case. The hearings were also attended by observers from Japan, Malaysia, Indonesia, Thailand and Vietnam.8 Considering the claims made by The Philippines, on October 29, 2015 the Permanent Court of Arbitration ruled its jurisdiction over the case.

The admission of arbitration against China under UNCLOS led to a mixed set of reactions from major world powers. After China released its position paper on 7 December 2014 objecting to the admission of arbitration, the United States State Department refereed to this report as not in accord with the principles of UNCLOS. In addition, Daniel R. Russel, US Assistant Secretary for East Asian and Pacific Affairs, said that since both Beijing and Manila are signatories to the UN Convention on the Law of the Sea, they have to abide by the tribunal’s decision.9Similarly, Julie Bishop, the Australian Foreign Minister, said that the ruling by the tribunal in The Hague will be as “a statement of international principle”. Even if China is reluctant to participate in its proceedings and accept the ruling, the decision “will be embraced and upheld by all other nations with claims or interests in the region.”10 Noting the problem of ‘growing tension’ in the SCS driven by China’s assertive actions, Hugo Swire, the British minister of state for the foreign office, termed the case of arbitration on SCS “as an opportunity for China and the Philippines to renew dialogue over their territorial disputes.”11The European Union (EU) also called for ‘respect of ruling’ by both the parties in arbitration.

China remained averse to the idea of The Philippines filing for an arbitration on the SCS dispute. It has adhered to the position of neither accepting nor participating in these arbitral proceedings. In keeping with this position, China did not submit a Counter-Memorial and did not participate in the hearing. Moreover, China refused to participate in the arbitration, stating that the submission of claim by The Philippines to Tribunal violates its voluntary Declaration on the Conduct of Parties in the South China Sea (DOC) signed in 2002 with the Association of Southeast Asian Nations (ASEAN). China also cited its 2006 declaration, subject to the provision of Article 298 of UNCLOS, wherein, a State party may declare in writing that it does not subscribe to the ‘jurisdiction of compulsory procedures over disputes’ in case of arbitration. However, China issued its ‘Position Paper’ in order to clarify that the ‘arbitral tribunal’ established against it at the request of The Philippines holds no such jurisdiction subject to UNCLOS. In this regard, it cited Article 280 of the Convention, which states that “Nothing in this Part impairs the right of any States Parties to agree at any time to settle a dispute between them concerning the interpretation or application of this Convention by any peaceful means of their own choice.”12 China has also accused The Philippines of ignoring the China-Philippines joint statement of 1995, which had stated that “a gradual and progressive process of cooperation shall be adopted with a view to eventually negotiating a settlement of the bilateral disputes.” 13

Despite the establishment of the ‘arbitration tribunal’ for the resolution of the dispute in the SCS between China and The Philippines, there are certain key issues that revolve around the legality of claims of both parties. The ‘question of upholding maritime law’ under UNCLOS rests primarily on the valid grounds of admissibility, jurisdiction and framework of dispute settlement procedures.

According to the Chinese submission, the provisions of UNCLOS can be applied for ‘arbitration and dispute settlement’ only when the subject under dispute involves questions on delimitation of Territorial Waters (Article 15), Exclusive Economic Zone (EEZ) under Article 74 and the Continental Shelf (Article 83). In its 2006 declaration, China excluded all such disputes from ‘compulsory dispute settlement’ as provided under UNCLOS rules as given in Article 298. Considering the nature of the case and claims by The Philippines, most of the relief it sought are in fact closely related to the territorial sovereignty claims over SCS, maritime boundary delimitation, and even question of historic rights. Interestingly, China had a ‘valid reason’ to raise preliminary objections, as such kind of disputes are beyond the jurisdiction of Article 298 of UNCLOS.

Considering another legal point over the absence of China before tribunal, it is also not an uncommon practice in bilateral disputes as “default of appearance is nothing unusual in international adjudication.”14 However, despite China’s refusal, the Tribunal has a duty before it, under Article 9 of Annex VII in UNCLOS, to examine its jurisdiction, that is, to “satisfy itself that it has jurisdiction over the dispute.”

On the question of ‘historic rights’, and Chinese claims to the SCS based on it, there is no specific definition in international law. Also, UNCLOS makes no clear provision on historic rights, but does mention related concepts in the provisions of Article 10(6) which provides that “the foregoing provisions do not apply to so-called ‘historic’ bays”. But three have been cases related to historic rights of specific waters like that between Norway and the United Kingdom (1951), Soviet Union for the Peter the Great Bay (1998) and Libya’s claim for the Gulf of Sidra.

In the given context, South China Sea arbitration involves multiple questions related to the application of international law and law of seas, historic rights, delimitation and territorial sovereignty concerns, admissibility of the case and its potential execution. However, considering China’s non-appearance, the tribunal must proprio motu take judicial notice of all relevant facts, data, case precedents and public statements not communicated to it, and must apply its ‘arbitral wisdom’ based on international law for the examination of this matter. Indeed, this would be a dutiful discharge of it duties, as embodied in Annex VII to ‘satisfy that it has jurisdiction’ and contribute positively to the resolution of dispute.

1.The English text can be found in Office of Policy, Law and Regulation, State Oceanic Administration (ed.), Collection of the Sea Laws and Regulations of the People’s Republic of China (Beijing: Ocean Press, 1998) (in Chinese and English), pp. 182-83.

2.Law of the People’s Republic of China on the Exclusive Economic Zone and the Continental Shelf (1998).

5.A geographical line on the map used by PRC for their claims of the major part of the South China Sea.

6.United Nations Convention on the Law of the Sea (UNCLOS), available at http:http://www.un.org/Depts/los/convention_agreements/texts/unclos/closindx.htm

7.Foreign Ministry Spokesperson Hua Chunying’s Remarks on the Philippines’ Efforts in Pushing for the Establishment of the Arbitral Tribunal in Relation to the Disputes between China and the Philippines in the South China Sea. June 26, 2013, available at http://www.fmprc.gov.cn/ce/cemm/eng/fyrth/t1035577.htm

12.“Position Paper of the Government of the People’s Republic of China on the Matter of Jurisdiction in the South China Sea Arbitration Initiated by the Republic of the Philippines,” 7 December, 2014

13.Zhang Hua, “China’s Position on the Territorial Disputes in the South China Sea between China and the Philippines,” 3 April, 2014

is a Doctoral Candidate at the Centre for East Asian Studies, School of International Studies, Jawaharlal Nehru University, New Delhi.