Ex-servicemen are ‘role models’ of ethical leadership with ingrained morals and value systems focused on ‘Duty, Honour and Country’ contributing to society and nation building in substantial proportion with a great sense of commitment towards multi-faceted progression and excellence in all spheres of activities. Perhaps the first step in this direction is to identify the cardinal segment of the rural economy, which has so far not attracted adequate attraction of the policymakers but which deserves focus in the new government strategy.

The contemporary world presents a transformed scenario of a human society undergoing a rapid transition in terms of role and expectations. For the emerging nation states and powers, the principal task is to plan and achieve rapid economic development so that the trajectory of high, inclusive growth can be achieved and poverty can be rapidly ameliorated.1 The objective is to create an economic and social order based on equality of opportunity, full employment and provision of adequate means of livelihood. It is multi- dimensional task, encompassing an extensive range of activities, viz economic, social, technical and cultural.

From the days of Independence till the opening of the economy in 1991, the government both at the Union and State levels were guided by the socialist ideals of the Constitution and played a major role in the funding and execution of all major development programmes and projects in many key areas of the economy. In terms of social stratification of the people, success could not be achieved because of the deteriorating law and order situation, corruption, spiralling price index, criminalistion of politics, poor ethical and social norms and degeneration of our value system.

The latest Human Development Report released by the United Nations Development Programme has ranked India 135 in a list of 187 countries, with 21.9 per cent of 1.2 billion people living below the poverty line or having income of less than $1.25 a day.

Governance, in contemporary usage, goes beyond how government institutions function…

With a large exodus of the rural youth towards the cities (census report of 2011 indicates that the level of urbanisation has increased from 27.81 per cent in 2001 to 31.6 per cent in 2011, while the proportion of rural population has declined from 72.19 per cent to 68.84 per cent in 2011) the only credible and educated workforce available in the villages, apart from the uneducated farmers, are the retired personnel of the armed forces who can be the common pivotal link in this whole socio economic transformation, given their sense of commitment and facing challenges towards attainment of enunciated objectives.

The threat is further enhanced by the degenerate functioning of the civil administration governance implosion and falling apart of the policing mechanisms. There are numerous productive measures that can be taken to improve governance. Focusing on evaluated outcomes, rather than internal procedures would help, as would delegation of responsibilities. The retired officers of the Armed Forces are yet another experienced and highly motivated resource pool available in the civil society, within the existing civil structure. Dovetailing them into the planning and monitoring process of the various government schemes will pay substantively rich dividends.

Economic liberalisation and opening the economy for capitalism culminated to the neo-Liberalisation economic model in India, where the ‘rational self interests’, which are at very high stake in the multicultural setting within the state, society and people, are gradually moving from a critical to stable equilibrium. According to the economic census 2013, rural India is far more enterprising than the urban areas, as it counts for 61.3 per cent of the country’s industrial units compared to just 38.7 per cent in towns and cities. However, what is pertinent to note is that both in rural and urban areas, the part time labour (unorganised) is employed in greater proportions than full time labour.

According to the economic census 2013, rural India is far more enterprising than the urban areas…

The expansion in self-employed enterprises and non-agricultural opportunities and introduction of new rural enterprises indicate the potential productive capacity of huge pool of surplus resources and labour, upon which an alternative rural development model can be built. In this model the ex-servicemen can make positive contributions.

Governance, in contemporary usage, goes beyond how government institutions function. It is seen in terms of partnerships and cooperation between governments, corporate sector and civil society. The United Nations definition of governance includes specifically the effective cooperation between the government and the non-government actors to bring about solutions that are mutually beneficial.2 This inclusive process is based on shared interests, where each partner contributes according to their respective resources, strengths and areas of expertise.

The core issue that has been identified is not the lack of planning, but a planned ‘road map’ for implementation of the thought process. The lack of ‘transformational leadership’ is evident in the fields of public education system, health care, water management (only 18.7 per cent of villages have safe water supply while 51.1 per cent depends on wells, tanks and other sources, 32 of the villages do not have any water supply) and electricity services (some 400 million people have zero access to electricity) and delayed infrastructure projects. The officers of armed forces who retire between 45-58 years of age have a vast experience in the tenets of transformational leadership and are rightly suited to head/part of the monitoring/execution agencies towards greater accountability in accomplishment of envisaged objectives.

The Gujarat model of SOSAS, ridiculed by the scholars as a ‘crony capitalist’ model, is fast emerging as a systemic economic development model…

‘Transformational leadership’ is defined as a leadership approach that causes change in individuals and social systems. In its ideal form, it creates valuable and positive change in the followers with the end goal of developing followers5 into leaders. Enacted in its authentic form, transformational leadership enhances the motivation, morale and performance of the followers through a variety of mechanisms. These include connecting the follower’s sense of identity and self to the mission and collective identity of the organisation; being a ‘role model’ for followers that inspires them; challenging followers to take greater ownership for their work, and understanding the strengths and weaknesses of followers, so the leader can align followers with tasks that optimise their performance. History is full of instances where individuals have transformed the course of future of nations, with their own style of charismatic leadership. Examples are many, both in the economic and military domain, viz Nelson Mandella, Steve Jobs, Mahatma Gandhi, Bill Gates, Field Marshal SHFJ Manekshaw, General D. Eisenhower, to name a few.

The leaders in the armed forces are the true epitome of ethical leadership as they lead their men with a conscience in the most difficult and life threatening conditions; by motivating them and getting the best out of their command in the inhospitable and unfavourable conditions. However, it is an irony of our ‘great nation’ that these patriotic and dedicated men in uniform are not being co-opted in society and nation building as part of policy instrumentation for overall growth oriented development, once they get superannuated from their respective services.

In order to bring about transformation in administrative, social and governance system within the country, a number of movements have been initiated since Independence viz, Acharya Vinova Bhave`s ‘Bhoodan Movement’, Jayprakash Narayan`s ‘Total Revolution’ and the more recent Anna Hazare’s ‘Anti Corruption Movement’. All these leaders tried to transform the Indian society; however, their efforts could not reach a conclusive end, as each of these models had endemic limitations to address total sustainable societal transformation6.

SOSAS at the State Level

Apart from the transformational movements, there have been instances of successful growth models in few of the Indian States, Tamil Nadu and Gujarat being the frontrunners. Although the Gujarat model is essentially based on the economic reforms launched at all India level, it incorporates several modifications introduced by the Government of Gujarat in the context of the state’s socio-economic and cultural conditions, as well as the ruling party’s political ideology under the dynamic leadership of then Chief Minister Narendra Modi. Gujarat has, unlike many other states, followed the classical model of transition from agricultural development7 to industry-led development before transforming into an economy dominated by the service sector. In the last decade, the state has seen an exceptionally large flow of industrial, especially large infrastructural investment, both by the private sector and the government. The Gujarat model of SOSAS, ridiculed by the scholars as a ‘crony capitalist’ model, is fast emerging as a systemic economic development model.

In order to ensure continuous all pervasive improvement of the systems towards holistic multi-spectral high trajectory growth, a number of innovative measures are required to be taken by the country for strengthening its strategic planning process and moving them in the direction of a sustainable pragmatic development strategy. This entails identification, coordination and continuous improvement of mechanisms that help towards balancing the economic, social and environmental concerns of multiple stakeholders.

The following steps8 apply in full to strategy development tasks: 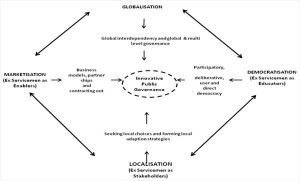 To honour the supreme sacrifice of Indian soldiers, 18 Victoria Crosses (VCs) in the First World War and 30 in the Second World War were bestowed on them. The achievements of the Indian Armed Forces in varying roles since independence i.e. guarding our own frontiers, rendering overseas military assistance to neighbouring countries or other nations as part of United Nations Forces, maintenance of internal security and aid to civil power in civil disturbances and in national calamities, has always been a matter of immense pride for all of us in the country. The spectacular achievements have been possible due to their qualities of leadership, discipline , integrity , responsibility and above all a quest to excel always and every time.

Defence Minister Arun Jaitely10 on August 19, 2014, while addressing the Director General Resettlement (DGR) Corporate Conclave 2014 in New Delhi, stated that the corporate sector should utilise the services of ex-servicemen to meet their requirements of trained, experienced, talented and disciplined manpower. Therefore, perceivably there exists a credible force, both at the grassroots (retired jawans) as well as the highest level (retired defence officers) which can be a major contributor towards a holistic and transformational growth from village to the state level.