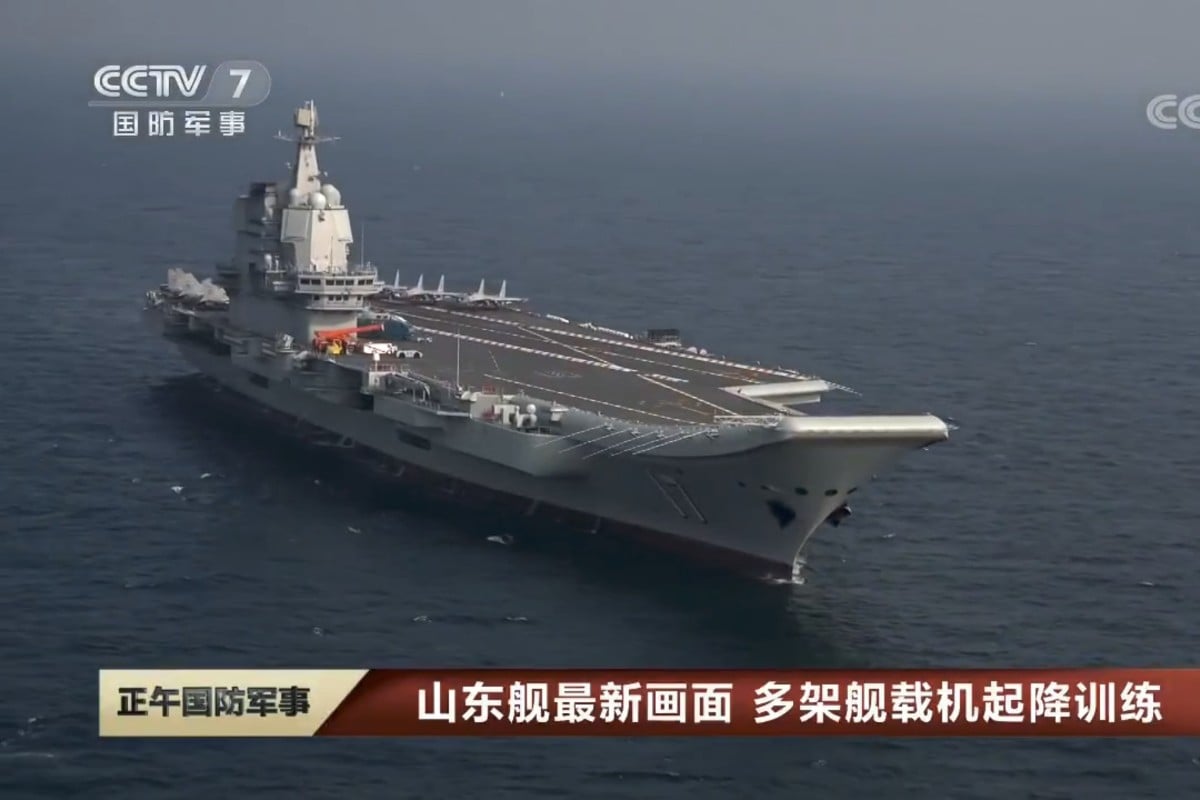 On December 17, 2019, China became the first country in Asia to have commissioned the CNS Shandong (山东) – an independently designed and built aircraft carrier since World War II. After India, China will have the distinction of operating dual-carrier capability for the first time in Asia and its national history – a rare distinction in the comity of nations.1 China’s first aircraft carrier – CNS Liaoning (辽宁) – was an under-construction Kuznetsov-class carrier Varyag bought from Ukraine after its break-up from the Soviet Union in 2001, and refitted in China. Lessons learnt from its construction at Dalian (Liaoning Province) and operations conducted upon its deck since its commissioning in 2012, have guided the construction of CNS Shandong – similar, but not the same. The CNS Shandong is commissioned in a combat ready state, unlike CNS Liaoning which was unable to launch aircraft from its deck during its initial years in service and was officially designated as a “scientific research, experiment, training ship”.2 According to the political commissar of CNS Liaoning, Commodore Li Dongyou CNS Liaoning was combat ready in November 2016.3

This dual-carrier capability milestone is a significant addition to China’s strategic capabilities, tactical flexibility, and operational readiness in both space and time. However, much remains to be deciphered about the Chinese naval doctrines that will operationalise this naval platform – how, when, where and why? Both aircraft carriers are reported to be placed directly under the command of China’s Central Military Commission (CMC) and not their respective theatre commands – a strategic asset.4 By basing the CNS Liaoning along its Eastern seaboard and the CNS Shandong along the Southern seaboard, China intends to ensure swift reaction when the presence of an aircraft carrier is needed.5 According to Wei Dongxu, “the second aircraft carrier based in the South can effectively patrol the South China Sea, protect islands and reefs there and act as a strategic foothold at sea”.6 Furthermore, while CNS Liaoning operates in the Pacific Ocean from the East China Sea, CNS Shandong could operate in both the Pacific and Indian Oceans from the South China Sea. According to Li Jie, with the commissioning of the CNS Shandong, the availability of at least one aircraft carrier is ensured at any given point in time and a dual-carrier battle group can assure regional sea and air superiority on the high seas during intense conflicts which require the launch of at least 45 carrier-based aircraft.7 According to Jin Yinan (National Defense University, PLA) construction of a third, a new type of aircraft carrier is currently underway at the Jiangnan Shipyard in Shanghai.8

In this modern era of warfare, the vulnerability associated with large surface combat warships has not deterred major powers from coming after immoderate and convoluted projects such as the aircraft carriers. The requirement of such capabilities supersedes the economic capacity of a nation and is now being pursued anew by multiple nations. Following China, India is expected to commission its second indigenously-built aircraft carrier (INS Vikrant) in the near future despite financial constraints and slowdown in global economy. In Asia, Japan and Korea are expected to operate their carriers along with other major powers United Kingdom, Turkey, Egypt and Russia elsewhere.9 In rumination, the role of an aircraft carrier in modern warfare has not faded entirely, and maintains its relevance to operate within the wide spectrum of armed conflict.

The exact nature of China’s naval doctrine that will operationalise its aircraft carriers is unclear to both domestic and foreign analysts. China’s military modernisation in last four decades was, by design, intended to do away with aircraft carriers. The challenge of dealing with the strike force present on an aircraft carrier became clear to Chinese political leadership during the third Taiwan Strait crisis (1995-1996) when Chinese military were unable to even locate the exact coordinates of two US carrier battle groups (USS Nimitz and USS Independence).10 Since then, China’s investment in building capability to strike manoeuvering targets at sea with ballistic missiles is a case in point. China previously considered aircraft carriers to be an extravagant misadventure on the part of Western capitalist governments. Aircraft carriers were meant for expeditionary missions distant from one’s shore, while China’s core national interests were near at hand, both on land and at sea.

This chronicled view now stands transformed! China has now conjured the concept of Far Sea Forces (FSF) in the Defense White Paper, 2019, as she is now in need of a global military footprint given its inextricable linkage to the global economy. A strong economy with weak military power is understood to be inviting unwarranted strategic risks. The PLA Navy now conducts vessel protection operations, maintains the security of strategic SLOCs and carries out overseas evacuation and maritime rights protection operations. An aircraft carrier is likely to become the core of China’s FSF [Defense White Paper, 2019]. However it is unlikely that China will operate its aircraft carrier in a way the US Navy does and is likely to demonstrate unique Chinese characteristics. An ‘opinion’ published in the Global Times on December 17, 2019, briefly outlined the Chinese assumptions and approach towards its carrier.11

Furthermore, it is a laborious task for China to drift from a continental mindset towards a maritime one. For example, China intends to avoid a major conflict through means of deterrence rather than engage in actual combat. To fight is a failure of its leadership’s strategic acumen, although China gears itself to win a regional war under high-tech conditions at the tactical-operational level. China seems to have been schooled by the Russian approach towards deterrence in this regard. The timely concessions made on NATO’s part, given Russia’s highest state of military readiness mobilising – 150,000 troops and 20,000 various types of equipment – under President Putin’s order, is a case study in this regard. The impact of Russia’s military readiness was so profound that the Commander of the US Second Fleet changed his previous browbeat remarks, suggesting that NATO’s actions did not mean to provoke Russia.

China has four levels of war readiness (Level 1 being the highest state of readiness).12

Level IV: When foreign countries carry out large-scale military operations that may have an impact on China, the army maintains its usual state, only adjusts its duties, and carries out routine operations such as war readiness checks, enhanced patrols and enhanced border controls.

Level I: First-level war readiness is initiated when foreign countries may be directly in conflict with China. It is said that since the founding of the Republic of China, Level I readiness has been carried out a total of six times.

The armies enter a state of war and all the on-duty personnel work non-stop and expand the army urgently, mobilise all reserves, prepare to use ordnance and strengthen positional fortifications. At the same time, the use of various means to closely monitor the enemy, radio command network full-time listening, ensure uninterrupted command, stop all vacation, conversion, veterans, the army opens the war-ready warehouse (weapons and ammunition) loading, ammunition sent to individuals and ensures that every soldier can be put into battle at any time. In addition, the state military enterprises also enter the whole line of work, non-stop manufacturing of military equipment. In order to allow troops to quickly assemble, civilian aircraft, ships and other means of transport will be unconditionally converted to military. In other words, all resources in society are to be utilised for war purposes.

At this level, China will mobilise ten million veterans and reservists in just one week, quickly mobilise 30 million militia and quickly set up 400 million reserve production personnel to provide the army with a steady stream of materials. China believes this state of readiness alone will be sufficient to discourage the adversary’s war efforts.

Despite its emphasis on high technology, China’s attitude towards defence-oriented strategies and people-centric approach remains unimpaired. In its study of the air-campaign during the war in Kosovo (March-June 1999), Chinese analysts have come to conclude the weakness of advanced weaponry.13 China learned from the war in Kosovo that they were increasingly required to foster highly qualified human resources (Yoshiaki and Katsuhiko, 2002). China’s primary concern with aircraft carriers is the need for qualified Commanders who have inter-disciplinary skills at both flying and navigation [Commanding Officer, CNS Liaoning].

Given its strategic culture oriented towards defence and its land-centric mindset, China is likely to employ its carrier battle group in support of its Army. The primary role of carrier-based combat jets in this regard would be to create pockets of air-superiority to allow its land-based aviation (bomber fleet) to perform its mission as against an independent strike role that incurs abnormal risks. The operational art thus involved will exhibit Chinese characteristics. China has classified its aircraft carrier as a “New Type of Weapons System” and hence, will need a new type of doctrine to operationalise it.