Home  >  Spotlights  > Defence Industry  >  Signalling with INS Arihant: Import of the Message and the Messenger

Signalling with INS Arihant: Import of the Message and the Messenger 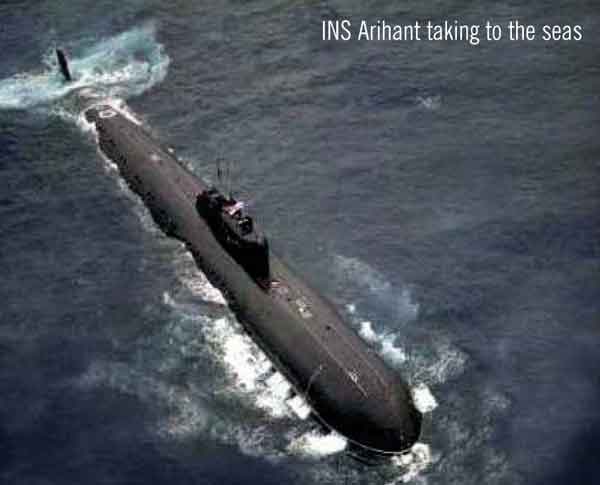 The announcement on 5 November regarding the completion of the first deterrent patrol of India’s first indigenous nuclear-powered submarine (SSBN), the INS Arihant, has evoked three kinds of reactions: a euphoric one from strategic analysts within the country; expressions of concern by those across the borders from India; and, a fair amount of derision from India- watchers in the US and elsewhere who have cast aspersions on the ‘deterrent’ value of one SSBN with submarine-launched ballistic missiles (SLBMs) that have limited range. It is worth disaggregating and examining each of these reactions to understand the true significance of this development.

First, the euphoria is understandable. It is indeed no mean achievement that India, with its financial constraints, and having lived most of its life under technology denials, has managed to design and construct a nuclear-powered submarine equipped with nuclear-tipped ballistic missiles in just 20 years after it announced the successful testing of its nuclear weapons capability. As is well known, a SSBN is a complex engineering creature involving conventional and nuclear systems that must remain functional at optimal performance levels in the harsh and rough environment of deep seas. For India to accomplish this feat and display its technological prowess certainly calls for a round of congratulations. It may be recalled that China’s first Xia class SSBN had been commissioned in 1987 and it is not known to have conducted any active patrolling over the next two decades. According to media reports, it is the second generation SSBN of the Jin class that conducted the country’s maiden patrol in 2016. By those standards, India has not done badly at all in the construction and operationalisation of its credible nuclear deterrence.

With regard to the second kind of reaction seen in the Pakistani media that has inclined towards outpouring of concern that strategic stability between the two countries will be upset by this development, two facts require reminding. One, Pakistan has never been a votary for nuclear stability with India. It has certainly aspired for strategic parity but not stability since its nuclear strategy is premised on the idea of keeping the relationship unstable, teetering on the brink of heightened risks of escalation, so that India would be deterred from action at the conventional level in response to its continued acts of terrorism. Since the fear of nuclear escalation is meant to act as a shield against India’s superior conventional capability, establishing strategic stability has not been, and will not be, a priority for Pakistan till its strategic calculus of exploitation of the tool of terror changes. Secondly, induction of capabilities that establish assuredness of retaliation in a nuclear state are actually stabilising developments. Construction of hardened silos, deep tunnels for protection of the arsenal, command and control, and for deception, operationalisation of SSBNs etc are meant to provide the country with a sense of confidence that it will be able to retaliate with nuclear weapons to cause unacceptable damage even in case of a first nuclear strike by the adversary. This sense of assurance stabilises crisis stability. Given that Pakistan is constantly taking steps to generate crisis instability, India’s SSBNs in conjunction with its no first use (NFU) nuclear strategy actually enhance strategic stability.

The third response to the announcement has revolved around the inadequacy of one boat with missiles of a rather limited range to qualify as effective deterrence. Indeed, it is a bit of an overstatement to truly describe this development as the establishment of India’s nuclear triad. It certainly is a step in that direction, and a steady one at that. But for a nuclear triad to be really operational, India will have to wait a few years till at least 2-3 nuclear boats are commissioned and the ranges of the SLBMs improve beyond at least 3000 km. Agni V missiles, once operational on land, must mutate into sea-based versions to take the ranges to close to 5000 km, so that the SSBNs can stay out of harm’s way and threaten effective retaliation against an adversary inclined towards first use of nuclear weapons, however they may choose to describe the weapon – low yield, tactical, or for battlefield use. Since India makes no distinction in types of nuclear weapons, certainty of retaliation would be further ensured with the presence of effective deterrent patrolling by a sufficient number of SSBNs.

Finally, the significance of the announcement comes from the fact that it is the head of the Indian Nuclear Command Authority (NCA), the prime minister, who chose to make it. This is rather uncharacteristic by Indian standards where the officialdom has opted for a low nuclear profile and steered away from drawing attention to India’s nuclear capability. But it bears understanding that establishing the credibility of nuclear deterrence in the eyes of the adversary demands communication of capability and resolve. In this one masterstroke from the PM himself, India has managed to convey both. It has also underlined its commitment to the NFU and indicated the certainty of retaliation to undercut the possibility of nuclear blackmail – the two counts on which questions were being raised. Is it surprising then that the signals are being read carefully, here, there, and everywhere else?

One thought on “Signalling with INS Arihant: Import of the Message and the Messenger”