A typical polar diagrams for unsuppressed and suppressed ship IR are shown in figure-6. 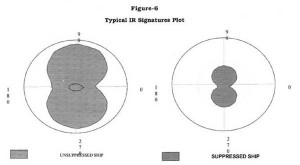 The sources of underwater radiated noise in ship are mainly from machinery both propulsion and auxiliary, flow fluid in the distributed pipe line systems and cavitation of propellers. It is necessary to employ great care to incorporate suitable noise suppression measures to achieve low noise target levels. These include resilient mounts, double mounts, rafts, flexible coupling, quiet propellers etc.

The typical curves of radiated noise with and without stealth features are shown in figure-4. 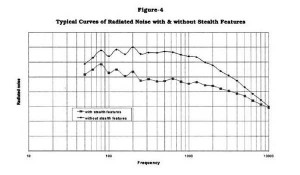 The 21st century will see more and more attention being paid to stealth features in an integrated manner to deliver the most optimum solution. Signature reduction will form only one part of a balanced stealth capability. The reduction of platform susceptibility can be achieved in a variety of ways including signature reduction, camouflage, deception, decoys, confusion, hiding and jamming. All aspects of signature management need to be coordinated at all stages of ship design, production and procurement.

The payload for the Project 17 frigates has been judiciously chosen to give lethal punch and at the same time be stealth in nature. The SRGM 76 mm gun has been specially designed and manufactured for stealth features. SSM and PDMS are in VLS configuration and thus provide stealth. The area SAM and the Anti submarine RBU-6000 if made in VLS configuration for future designs will further reduce the RCS signature. The ship is equipped with variety of weapon systems for multi purpose role including anti ship, anti air and anti submarine. The weapon systems include SSM, SAM, PDMS, RBU-6000, SRGM 76 mm gun, 630 mm guns, MFR, FCRs, ESM/ECM, Sonar, CAIO, two helicopters etc.

Some reports in the media mention, Shivalik design having been derived from a foreign acquired ship. These are incorrect reports. Instead some of the features of Project 17 had been incorporated in the acquired ships during negotiations.

The AISDN system provides the required flexibility and redundancy to the users on board. ATM (Asynchronous Transfer Mode) is a standardized digital data transmission technology and is a dedicated- connection switching technology that organizes digital data into 53- byte cell units and transmits them over a physical medium using digital signal technology. ATM has been seen as the ultimate networking technology that will allow broad band networking for the future. However fast Ethernet and gigabit Ethernet have brought more bandwidth to the LAN technology and is being preferred.

Towards ensuring a multi sensor, multi weapon scenario, the Project 17 Frigates are fitted with advanced CAIO system. The CAIO system collates all sensor data for exploitation, does threat evaluation, controls and designates weapon system. In CAIO, there is central availability of all sensor data to the command for supporting decision making. This ensures no duplicity of “action taken”. CAIO also ensures sensor data fusion. It allows for “informed” decision by command due overlay of radars, EW, and other available inputs. CAIO also enables central disposition and receipt of data to and from other platforms through data link system. The CAIO for Project 17 ships have been jointly developed by Indian Navy with foreign expert agency.

Project 17 Frigates have been designed with CODOG main propulsion system with LM-2500 fuel efficient gas turbines supplied through HAL Bangalore and Pielstick Diesel engines supplied through KOEL India. CODOG propulsion provides simplicity in operation, achieves over 30 knot speed and minimal fuel consumption. For comparable operating profile, the consumption of fuel is nearly one-third in case of CODOG propulsion as compared to COGOG arrangement. This will save fuel costs of about Rs 50 crores per annum at prices prevailing today.

The Indian Navy has thus displayed their capability in design and building of a new generation stealth frigate with futuristic technologies.

The Propellers have been specially designed for low noise and with cavitation inception speed of over 22 knots. The inward turning propellers give narrow wake. The shaft rake is low. The shaft brackets are very carefully aligned to the flow. The stabilizers are perpendicular to the tangent to hull lines to give superior alignment. These design features have contributed to minimal noise and minimal vibrations.