Security beyond the Pathankot Attack 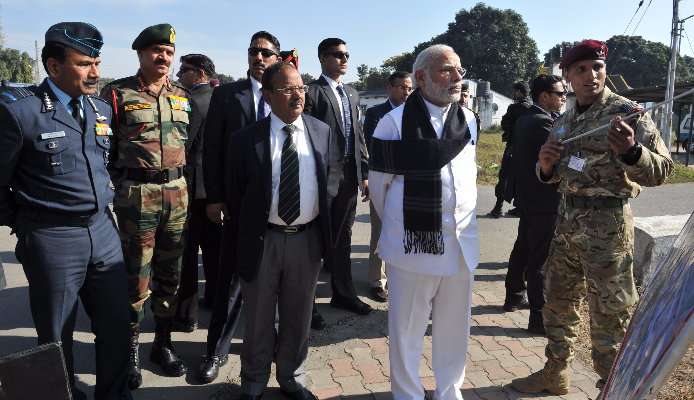 The Pathankot IAF base is near the border with Pakistan. A Pakistani terrorist squad entered the air force base in the wee hours of 2016 New Year Day by crossing the security wall, and hid in sarkanda grass before launching an attack on personnel within the base early on January 2.

…only serves to divert attention from the fact that India does not have a coherent, stated policy or doctrine on national security.

The debate in the media appears focused on several issues including the fact that there were intelligence inputs which were not acted upon, the casualties caused by the terrorists, the reason why the emergency was not handled by sequentially calling in forces starting with the nearest first, the role of the NSA, the evidence provided by SP Salwinder Singh, and that this attack took place not long after PM Modi made a surprise visit to meet Pakistan PM Sharif in Islamabad.

Unsurprisingly, there are critics declaring that this attack shows chinks and cracks in India’s security apparatus and security policy, and disputing the official line that the attack was handled adequately by the security apparatus under the control of the NSA, Mr. Ajit Doval.

The Pathankot attack provides the Parliamentary opposition with a stick with which to beat the ruling BJP. But whether or not PM Modi and/or the BJP suffer politically because of the alleged security lapses, and whether or not the Opposition gains political ground, the on-going political tu-tu-mein-mein only serves to divert attention from the fact that India does not have a coherent, stated policy or doctrine on national security. Addressing this serious shortcoming calls for focussing attention beyond the most recent security crisis that the Pathankot attack represents.

…the NSC needs to formulate a security doctrine and create a policy document for placing before the people’s representatives in Parliament.

The blame for not having an official policy on security cannot be laid at the door of PM Modi or the ruling BJP, since the National Security Council (NSC) has been under four predecessor governments. But lack of a stated policy and doctrine is deplorable, because India has had a NSC as the apex agency for national security with the PM at its head, since as long ago as November 1998, when it was formed by the BJP-led NDA-1 government. The NSC has a National Security Advisor (NSA), a bureaucrat with cabinet rank and status but no statutory authority, reporting only to the PM, and effectively making personality-driven responses to security threats and attacks.

Since national security involves at least three nodal ministries, namely MOD (external security), MHA (internal security) and MEA (diplomacy as soft power), it is necessary for the NSC to formulate security policy with wide consultation, on the basis of a vision of the nation’s long-term political, territorial and economic sovereignty for the progress of its people.

Thus, the NSC needs to formulate a security doctrine and create a policy document for placing before the people’s representatives in Parliament. The approved policy would dictate the course of (diplomatic, military, police) action and the agencies to be deployed in situations of threat to national security or attacks upon India by regular armed forces, irregular armed forces, terrorists from any source whatsoever, insurgents or militants, and also economic attacks. But sadly there has been a continued absence of strategic vision, policy or doctrine from the NSC.

Terrorists from Pakistan are not the only cause for concern. There are other countries which also use active and passive intelligence operating within India…

Resort to the standard operating procedures of the military and police cannot be a substitute for coherent security management based upon accepted security doctrine and policy, free from the influence of any political party, think-tank or individual personality.

The fact that India has suffered decades-long insurgency and militancy is not merely proof of decades-long poor governance and unprincipled domestic politics of various political parties, but also of absence of long-term strategic vision and security policy. Cross-border terrorism is a somewhat more recent factor, with terrorists from training and holding camps in Pakistan routinely making their way into India by land, and even by sea as in the Mumbai 26/11 attack, calling for response by India’s Armed Forces and Central Armed Police Forces (CAPFs) sans unified political guidance.

Terrorists from Pakistan are not the only cause for concern. There are other countries which also use active and passive intelligence operating within India, as indeed India would have in some other countries. For example, Pakistan’s ISI and China’s MSS provide support to insurgency and militancy within India. In some measure, these shadowy agencies also draw support from India’s much-hyped UID Aadhaar project, which is available to illegal immigrants into India. The Aadhaar project was formulated and implemented with little or no real-time concern for internal security, and it continues to be aggressively promoted by the present government despite demonstrable negative security ramifications. It is a moot point whether the physical and cyber security aspects of Aadhaar were ever discussed in the National Security Council (NSC).

India’s attempts to influence international security policy by demanding a permanent seat at the high table of the UN Security Council will not be taken seriously when her own apex security organization suffers from serious inadequacies.

India’s response to threats and attacks over the years has displayed a certain ad-hoc-ism which is unbecoming of a nation which counts itself as a regional power. For taking security decisions, India’s PM is dependent upon single-point advice of a bureaucrat-NSA having questionable military expertise, with India’s military in a subordinate don’t-speak-unless-I-ask-you position. National security is a complex inter-disciplinary matter, and unless the PM has two NSAs, a bureaucrat for internal security and a military officer for external security, he will not be in a position to effectively employ the NSC for comprehensive and effective national security. The national security buck stops with the PM, and so it would be wise for him to have the best possible balanced advice to enable a holistic view.

India’s attempts to influence international security policy by demanding a permanent seat at the high table of the UN Security Council will not be taken seriously when her own apex security organization suffers from serious inadequacies.

The inadequate security measures and somewhat muddled response to the Pathankot attack has resulted in loss of lives and also attracted international attention. But apart from the loss of lives in the attack, there is also the fact of India being viewed as a soft state. It is time that all political parties understood the need for India to use the lessons learned from the Pathankot attack as a springboard for revamping the NSC and coming up with a national security policy and doctrine, using the combined wisdom of its national elected executive and its people’s representatives in Parliament.